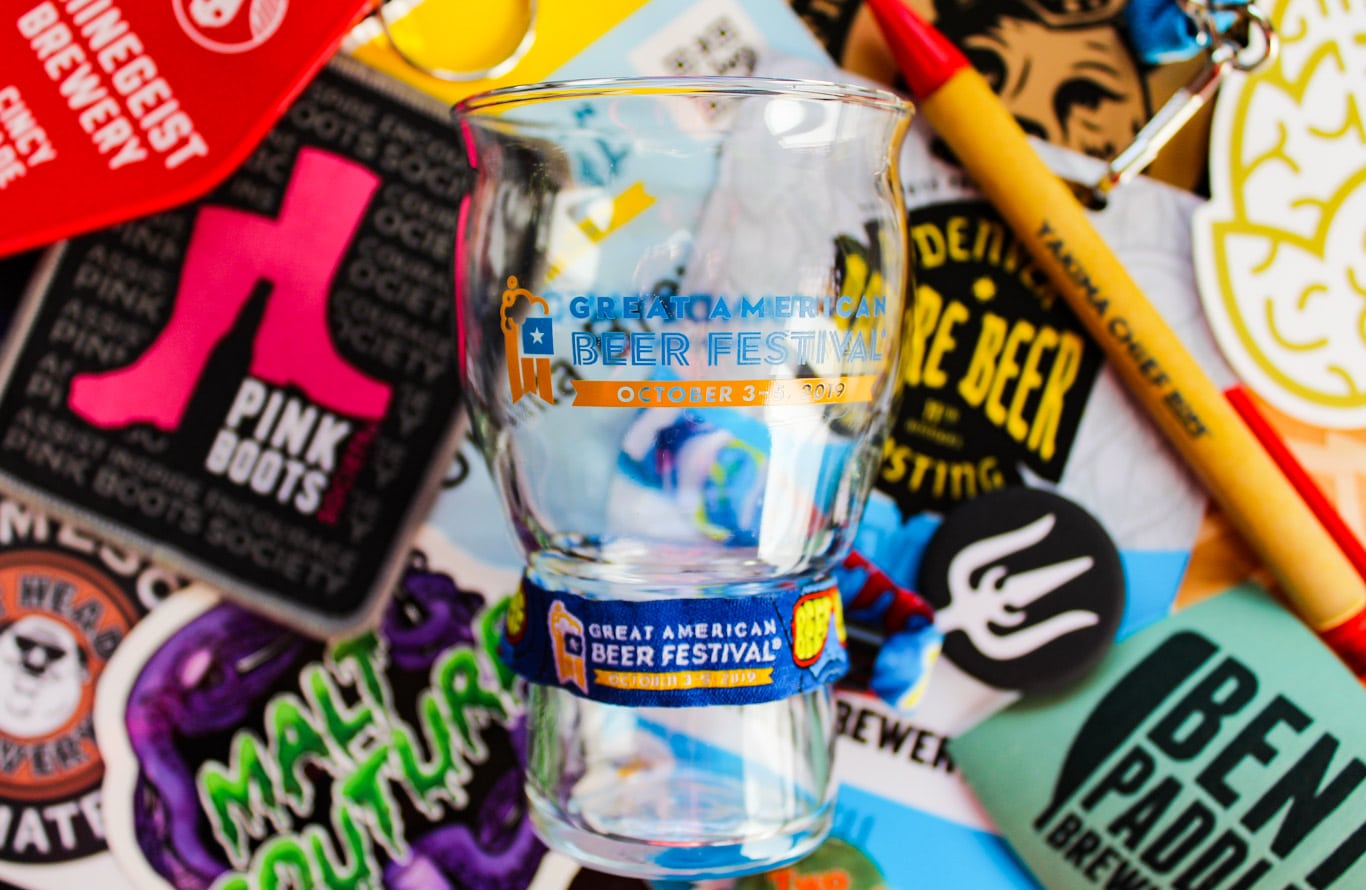 Almost a month has passed since I embarked on my fourth Great American Beer Festival journey. Hangovers fade, but certain lessons and memories tend to stick with me each year. Rather than recount the places I went to in a chronological fashion as I’ve done with my previous three GABF blog posts (2016, 2017, 2018), I decided to list the things I’ve learned – the things that have changed the way I think about beer and my potential future visits to America’s greatest festival of beer. This is The Great American Beer Festival Experience 2019. 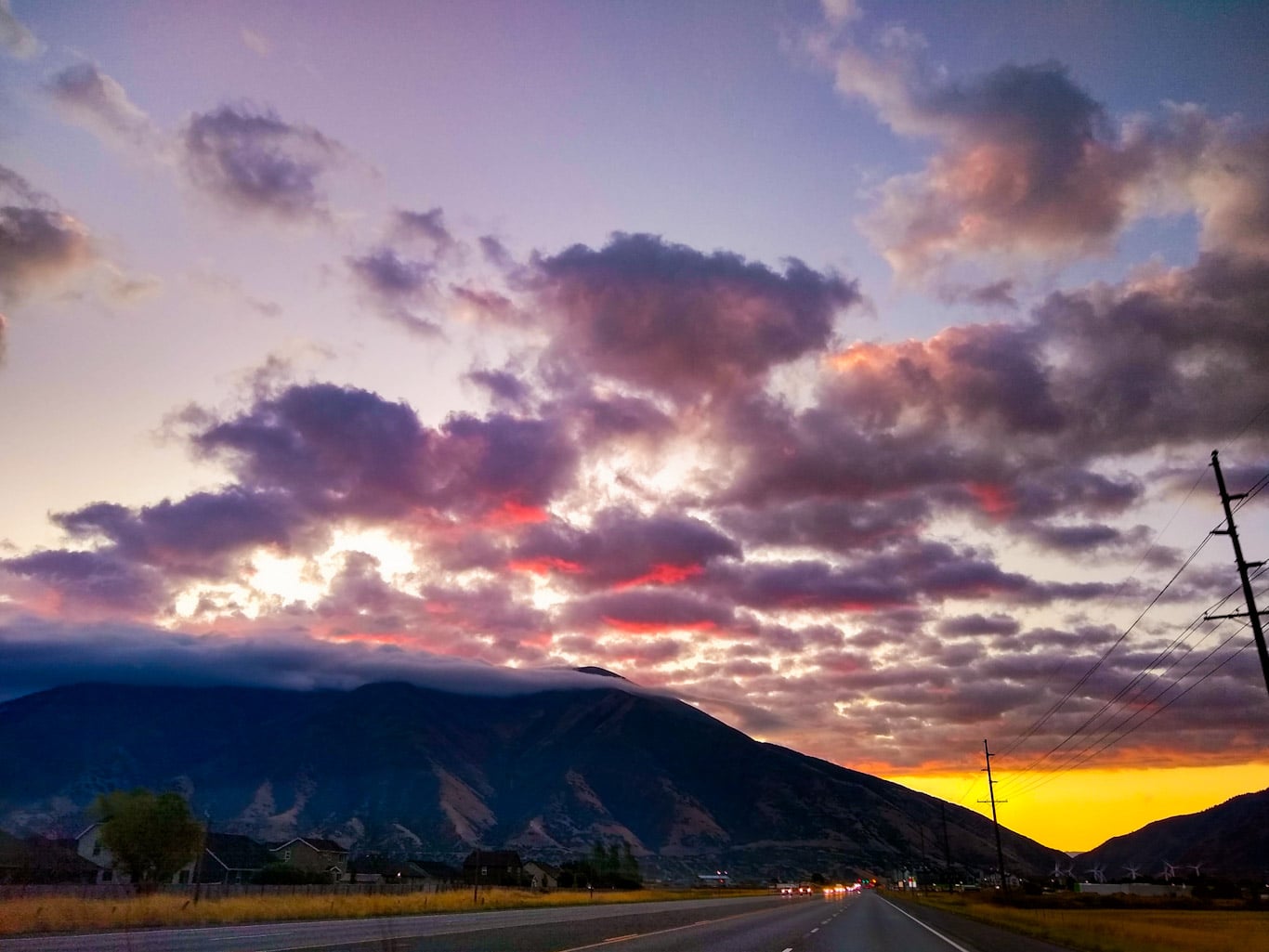 For those of you that aren’t flying to or residing in Denver, Colorado, I highly recommend taking the scenic route. My travel companion for the earlier half of my trip was the lovely Jamie Burnham! She drove us in the cool Kiitos Brewing Prius from Salt Lake City, UT through the winding, autumn views of I-70. Though I-80 would have gotten us there 45 minutes sooner, we would have missed out on the gorgeous fall colors… and tacos.

Yes, in the small downtown area of Glenwood Springs sits a tiny taco joint with some of the tastiest damn tacos ya ever did get yer gums on. I’m talking about Slope & Hatch, and it’s the perfect lunch spot to wet your palate before a marathon of drinking (or after, really). We snuck in right before the lunch rush hit, snagging beef barbacoa and curried lamb tacos. As we devoured, there was mostly silence between us, interrupted by the occasional “mmm” or “ughh”. The flavors would fall under the category of “don’t talk to me” (the highest category of flavortown). It would have been worth the 5.5 hour drive there, even if it was our only destination. I will be back. Huge thanks to Mrs. Burnham for introducing me to this gastronomic gem!

The remainder of the drive was even more beautiful with a stomach full of happiness. I’m not sure I’ll ever want to take I-80 to Denver again! I look forward to crossing paths with Slope & Hatch once more on my birthday weekend when I head to Breckenridge in January 2020 for the 20th anniversary of the Big Beers, Belgians, and Barleywines Festival! (Did you get your tickets yet!?)

Everyone Is Talking About Hard Seltzer

Woof… I can’t believe I’m writing about this. This industry has unfortunately bred a generation of consumers that want something new every time they drink. While this was an honest start at moving consumers away from domestic brands (Budwiser/Miller/Coors) and toward early craft brands (Sierra Nevada/New Belgium/Samuel Adams), it has morphed into a beast with its own mind that has consumers craving “unique beers” to tally on their social media apps, or even something that isn’t beer at all. While the popular flagships of the early 2000s sit idly by or receive repeated seasonal makeovers, breweries of all sizes have begun reaching into the dark corners of flavor possibilities and marketing schemes, yielding mutants and hybrids of every kind – some tasty, and some utterly horrifying. Breakfast cereal beer, milkshake IPAs, glitter beer, and now… hard seltzers. This non-beer is somehow snaking a death grip on the beer market. I’m fine with fad beers, but hard seltzer is a particularly low blow for breweries to handle. 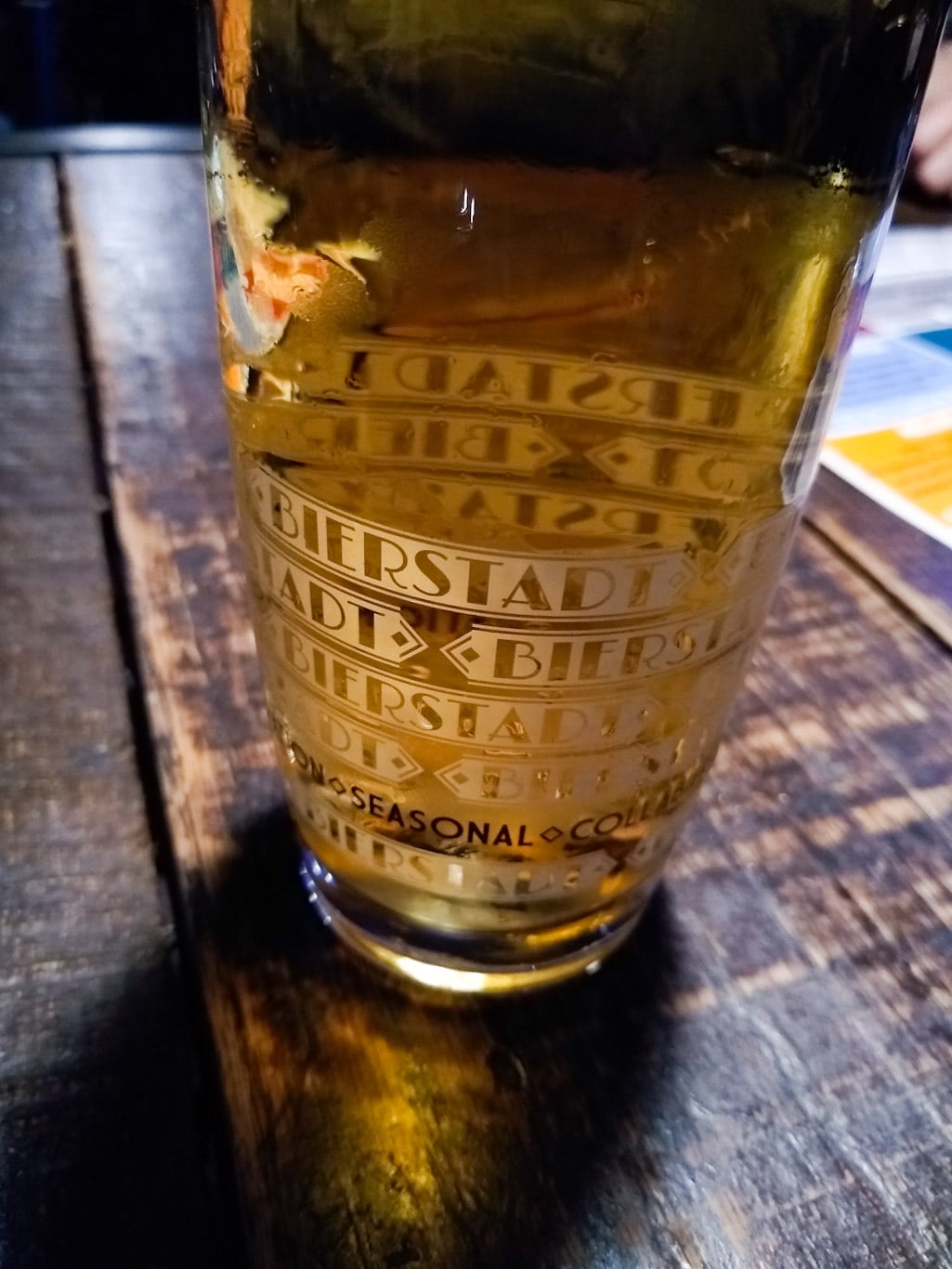 My personal opinion about hard seltzer comes mainly from my position as a professional brewer. I am a brewer. I make beer. I manipulate hops, barley, water, and yeast with the aid of adjuncts and spices to craft a product called beer. I am not whatever you call someone who makes hard seltzer. My aim is not to put those down that do make hard seltzer. My aim is to highlight the absurdity that breweries are being forced into hard seltzer creation in order to keep their doors open and remain relevant. It’s heartbreaking.

A group of us sat in Bierstadt Lagerhaus pondering over how we got here as an industry and where we’re going next. Some opinions about making hard seltzer were positive and others were dismal. One person thought of making/selling hard seltzer as a means to continue producing the creative beers they actually want to make, which is far better than the alternative of shutting down operations. I think I will gradually have to adopt this opinion, lest I allow my current stance to smother my mood. I overheard echoes of the seltzer conversation being had by others throughout the festival weekend. We are not alone in frustration. For now, woe is the industry that is forced to unwillingly distort itself to stay alive. Nature is cruel. Boo hoo. Please drink beer.

Snooze Is Still The Best Breakfast You’ll Ever Have

A solid breakfast is a must for surviving a long weekend of revelry. Snooze, An A.M. Eatery, has become a personal requirement for any Denver visit. I have not been let down yet, and it is the best breakfast I’ve ever had every time. Here’s how it goes down.

Walk into one of their three downtown locations (I always go to the one on Larimer St) and get on the waitlist. Rumor has it you can get on the waitlist from your phone, but the whole point is to wait for 30 minutes to an hour in the cold or in the crowded waiting space while you down free coffee. This is the perfect amount of time to stare at your smartphone and not directly socialize with your friends while you all wallow in the early tangles of a hangover. You’ll be seated by about coffee refill 3, unless you took it easy the night before and got there ahead of the crowd.

Drinks are ordered first, as always. I recommend the trifecta of coffee (yeah, more coffee), water no ice, and a bloody mary. Fluids are vital. The menu is a goldmine, but I always go for the benny duo with the chile verde benedict and whichever benny I’m feeling like for the other. I went steak + eggs benny this year. Excellent choice. Whatever you do, DO NOT FORGET THE SHARECAKE. That is, don’t forget to order a single specialty pancake for the table to share. Ask what the special pancake is. Yes, you’ll have room.

That’s about it. The service staff are always accommodating and kind. Refills are frequent but not overwhelming. It’s a goldilocks kinda place – just right. I’ve been to the Snooze in San Diego and received the same best breakfast experience I’ve had in Denver. Other locations exist in Arizona and Texas. Do yourself a favor and go get you some. 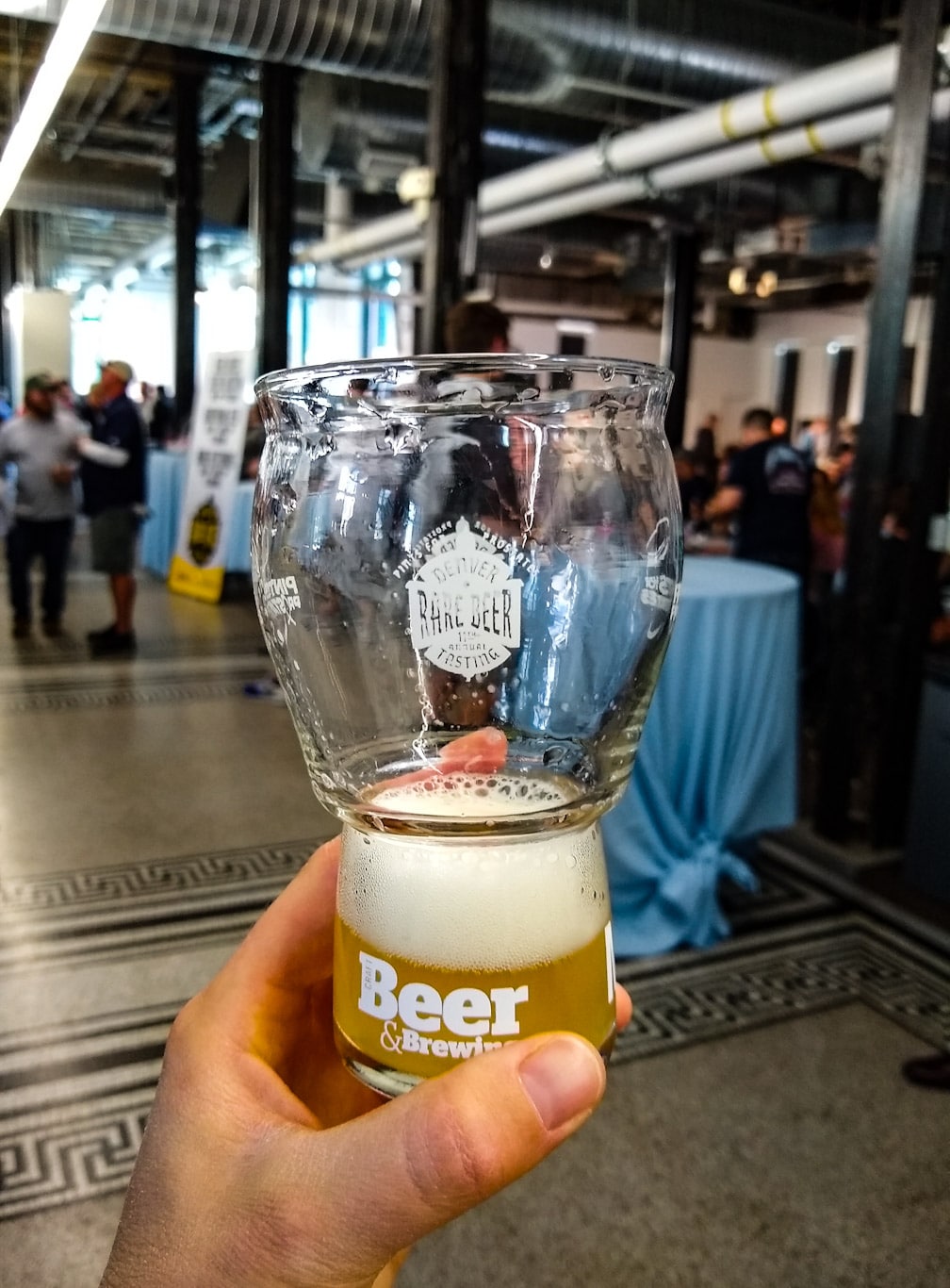 The Denver Rare Beer Tasting Is Worth Every Penny

I’ll be honest. I didn’t purchase a ticket. I worked the event pouring Alpenglow at the Uinta Brewing booth, and had the chance to slip away a few times to enjoy what the festival had to offer. I’ve never attended before, and have only heard about it from a few friends. Looking forward, I’d definitely pay the $200 dollars for one of the 650 tickets made available. Here’s why…

This festival has the creme de la creme of everything. While some volunteers are on staff for pouring, most brewery booths feature brewers and other brewery staff so guests can ask questions and have conversations face to face with the people that made what the festival revolves around. The beers being poured are also top notch, small batch, and/or limited in availability. These are the beers brewers are excited about, and the electricity in the room is a telling sign. I’ve never seen so many people pretend not to be excited like kids on Christmas morning. Eyes were large but the behavior was laughably restrained. Don’t worry, beer has a way of breaking that. Mid-festival, the true spirit of excitement roared throughout the building.

The festival was split up into three different floors, and food stations could be found throughout. Short rib sliders and a mac & cheese bar were among some of the food options. The food quality certainly matched the price of the ticket! There was a station for book signing and even a free men’s health screening. Most booths had freebies and the silent auction was a vast trove of goodies. Don’t forget about the glass and t-shirt included in the ticket price. The best part? All beer is donated by the breweries, and proceeds benefit the Pints For Prostates campaign. Is it worth your $200 yet? You know my answer. 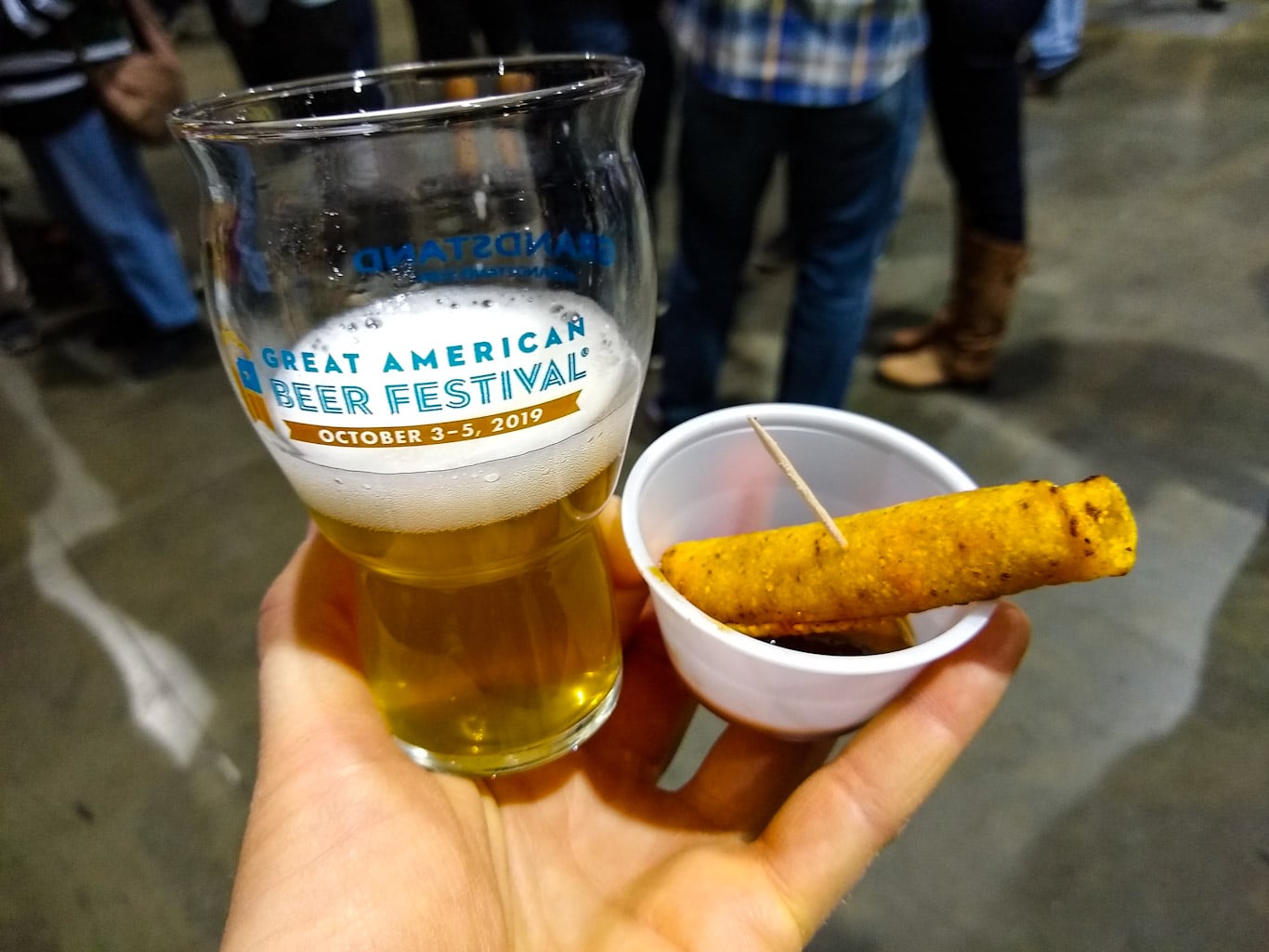 I Don’t Know What Beer Is Anymore

I’ll leave you with this. While perusing the beer selection at one of the GABF sessions, I caught a whiff of tacos. Indeed, there was a booth with a tray of taquitos hiding by the beer taps, and I very much wanted one. What I wasn’t prepared for was the beer that came with it. As we hesitantly asked for the Taco Gose at the Weldwerks booth, we were greeted with a lot of internal and curious “what the f***s”. WeldWerks Head Brewer / Owner Neil Fisher began describing the collaborative concoction he was about to lay on us. Follow closely, because I definitely didn’t get it the first time. 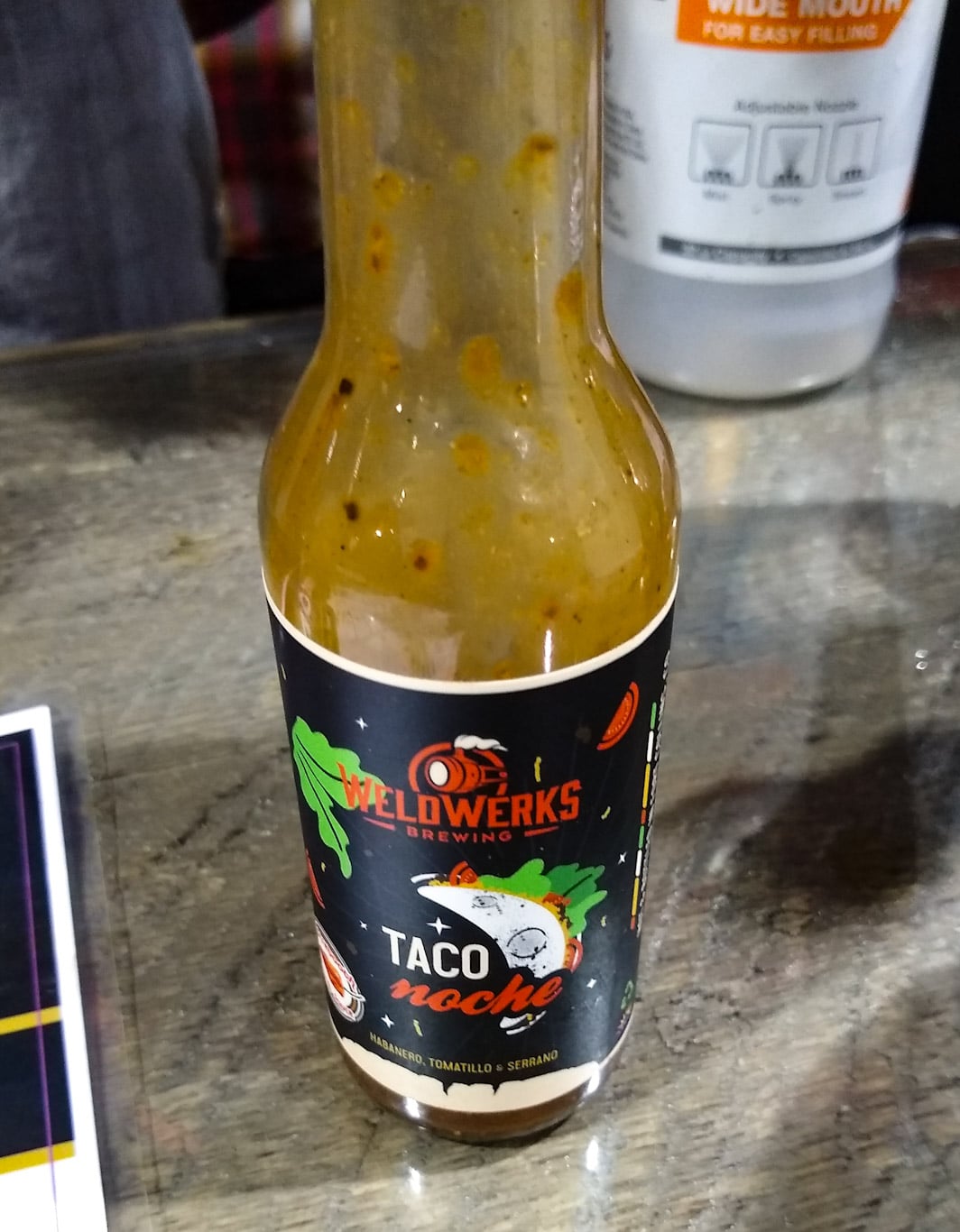 First, the base beer is completely loco. As described on the WeldWerks Brewing Company facebook page: “Taco Gose is a kettle-soured wheat ale brewed with over 600lbs of fire-roasted tomatoes, sea salt, chili powder, paprika, oregano, onion powder, garlic powder, and cumin, and tastes exactly how you’d expect if you had no idea what to expect.” In a collaboration with Horsetooth Hot Sauce, WeldWerks aged hot sauce in a freshly emptied Medianoche barrel (barrel aged imperial stout). This hot sauce, which was served with the taquito, is called Taco Noche. But wait, there’s more! The Taco Gose was then aged in the barrel the hot sauce was aged in. For a recap, the barrel touched bourbon, then imperial stout, then hot sauce (Taco Noche), and then Taco Gose. I can’t say I’d want to drink a whole pint, but I can say it’s the weirdest and most accurate food inspired beer I’ve possibly ever had.

I… I don’t know what beer is anymore… 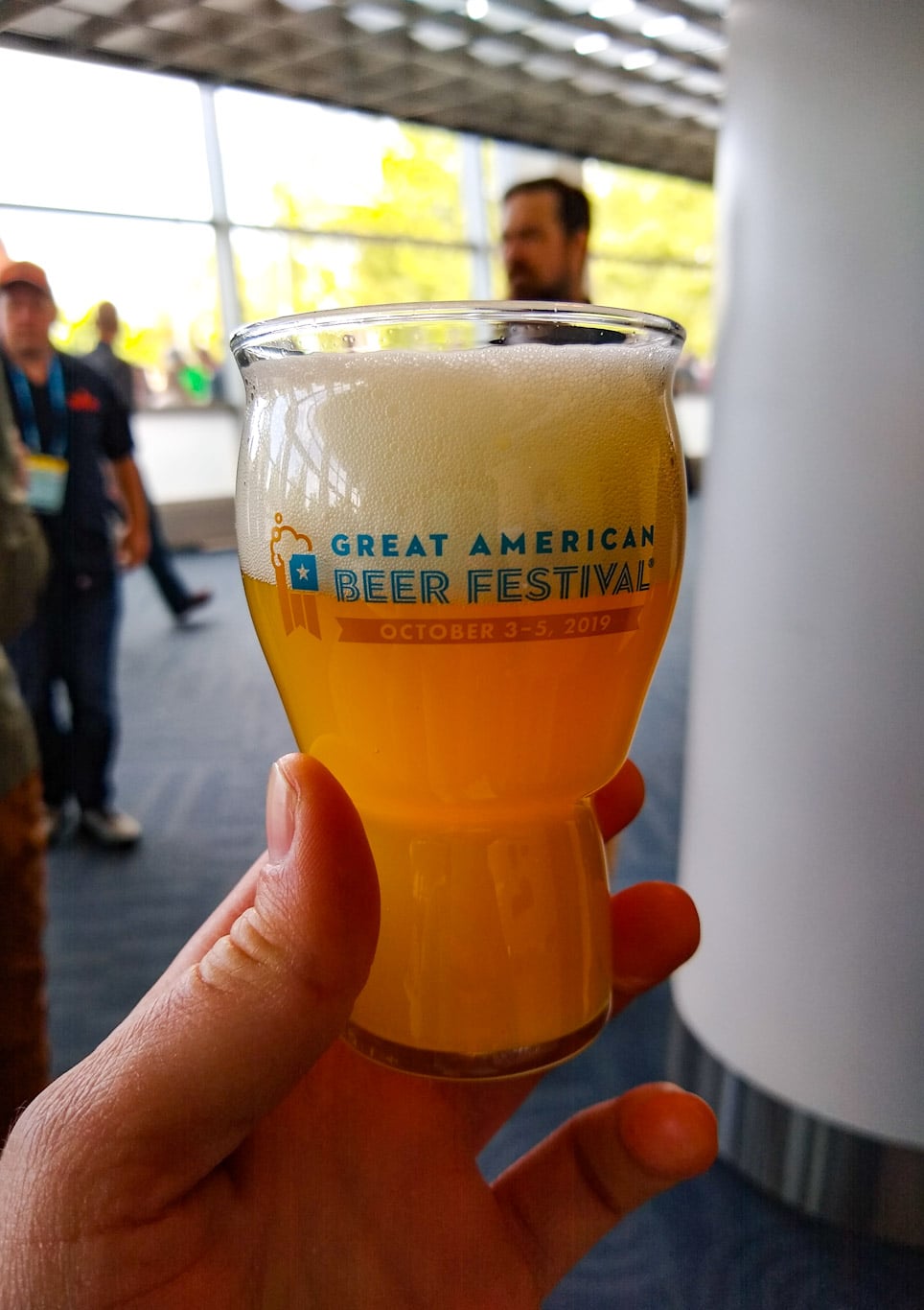 Congratulations to all participants and medal winners!