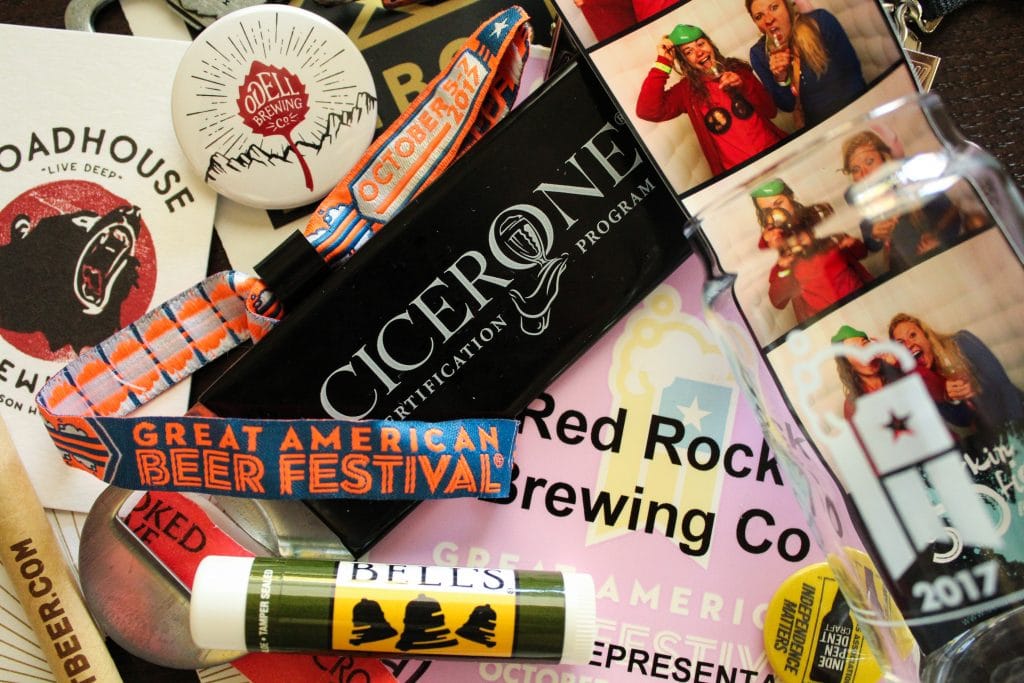 There’s a certain caution that accompanies first time experiences. For me, it means making mental and physical lists, checking them multiple times, and assessing my success as I progress. It keeps me honest with myself and focused toward whatever goals I may have. My goals last year at my very first Great American Beer Festival were to avoid hangovers, make connections, and gain whatever tidbits of beer education I could. As you may have already read in my last GABF post, The 2016 Great American Beer Festival Experience, I fared pretty well!

As a veteran this year, I made a rookie mistake. Or perhaps for me, it’s a veteran mistake. I have preached many, many times that no guy or gal is safe from the seductive beast of the all-you-can-drink-buffet without a plan. If you don’t have a plan, your beer-a-thon will conjure the unwelcome hangover hag who will visit you the next day and refuse to leave like that whining, Debbie Downer of a friend you’ve got (we all have one). My age has insured I experience my hangovers vividly to remind myself that I am indeed a middle-aged human, and not a drinking machine.

Plan or no plan, I had a hell of a great time! While last year was focused on trying as many new beers without getting whamo’d, this year was about catching up with my old beer buds and making a few new ones. No fest is complete without my beer bestie, Julie Olaf (AKA Snowman), who is always simultaneously the best and worst influence. 😉 GABF 2017 was full of spontaneity and unexpected delights, and I wouldn’t have had it any other way! 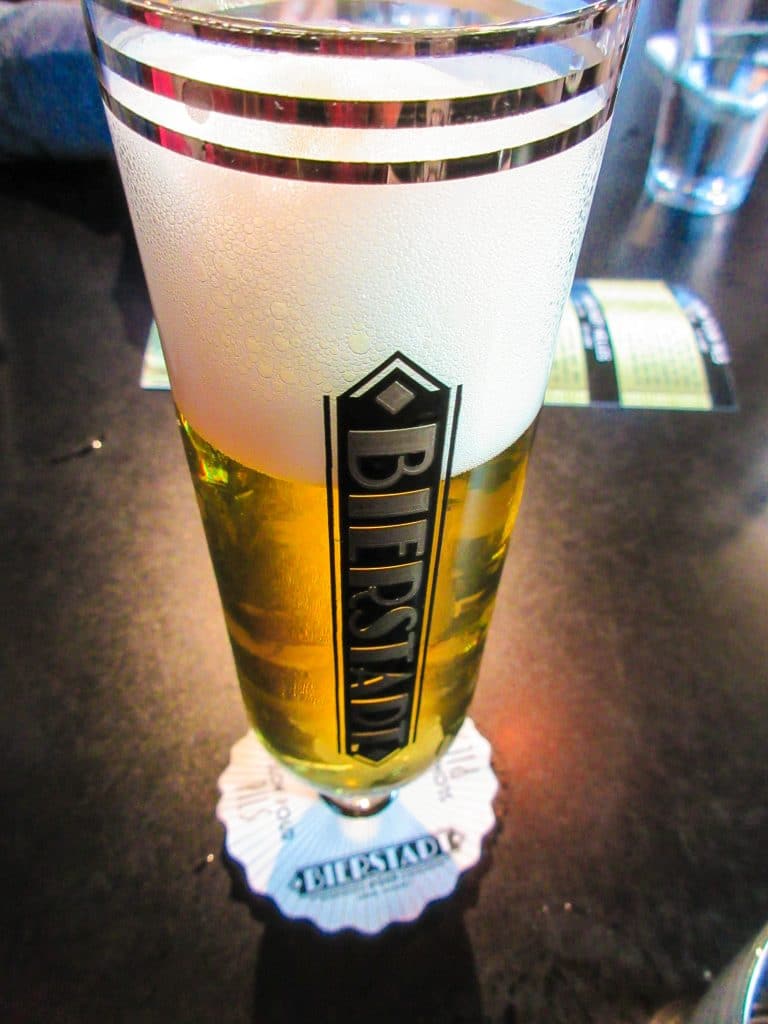 Home of the fancy pantsiest glassware in all of Denver (at least that I’ve experienced), Bierstadt Lagerhaus delivers fine lagers, each dressed in a proper glass. You’ll feel fancy as funk sipping on a Slow Pour Pilsner in a 300ml pokal with a branded sweat skirt. Did I mention their glassware is freakin sweet? Seriously, at a table full of educated brewers and beer enthusiasts, we talked about glassware more than the actual beer. Think about that the next time your lips touch a beer bottle (heathen!).

Beyond the glassware (glasswaaaaarreee!!), their brews were top-notch. Slow Pour may have taken a little longer to reach thirsty lips in order to achieve that small mountain of perma-foam, but “slow” and “long” were two irrelevant words once it hit the table. I slugged through three pilsners like they were juice samples at Costco. Grainy, crisp and clean – it was the perfect beer to kick off the first day of the fest. 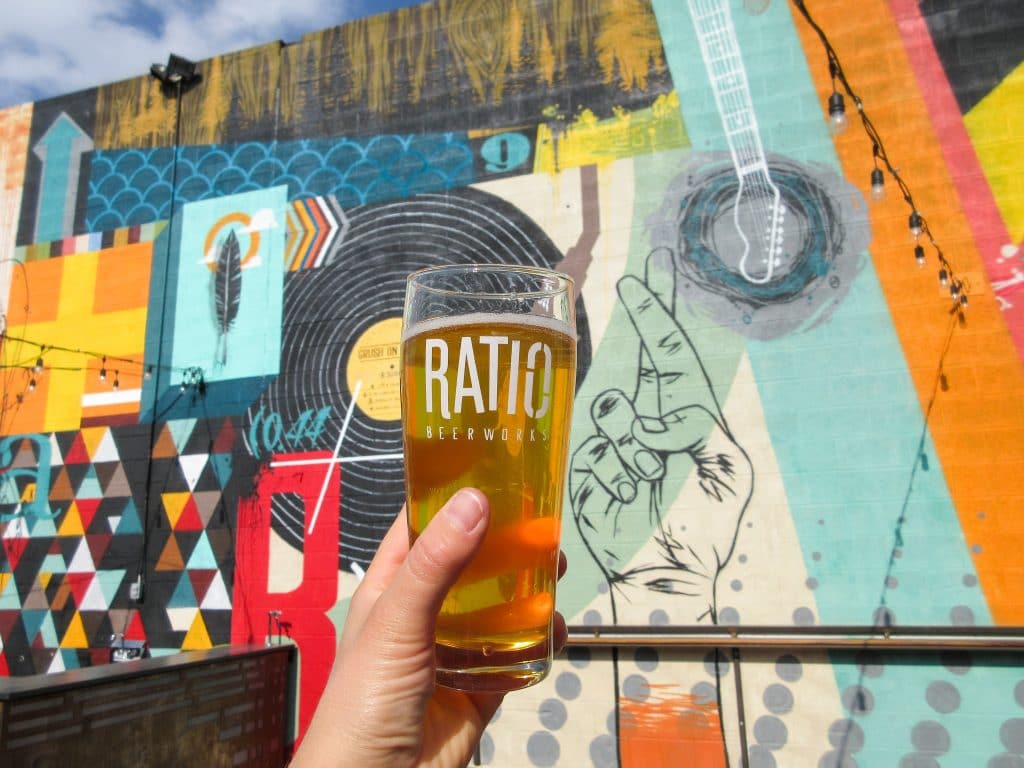 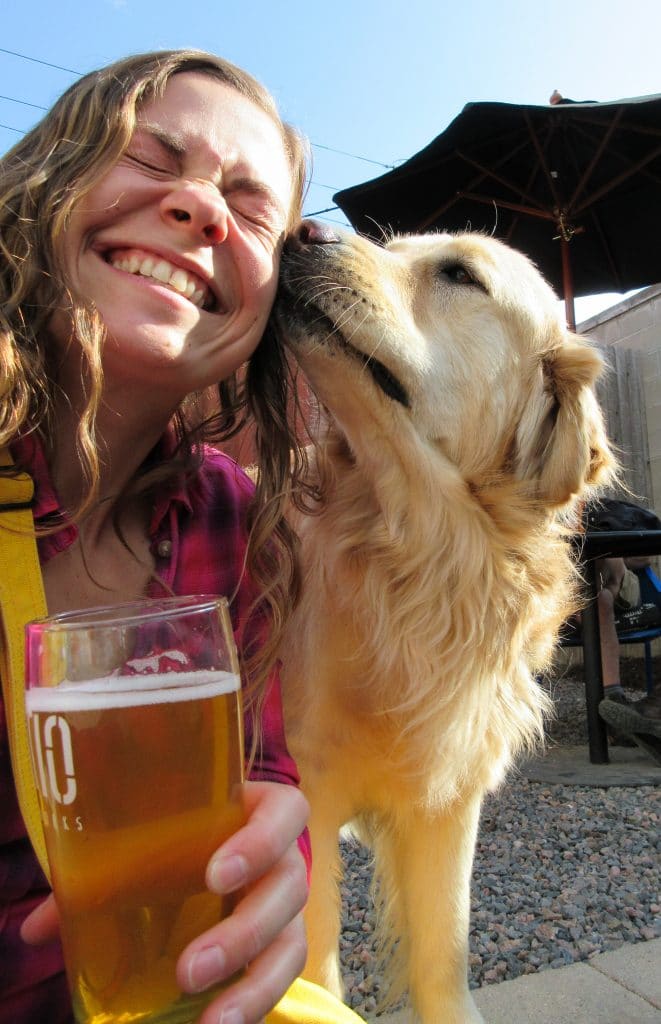 Some breweries are made for sessions. This taproom, with tall ceilings and a large biergarten, was welcoming, well decorated, and pet friendly. Yard games and a variety of seating gave ample room and atmosphere to session all day and into the evening. While we only stopped by for a beer before hopping off to the next location, it was a memorable 25 minutes.

After grabbing a Rented World Session IPA, I quickly fell in love with Harry the golden retriever in the biergarten. Many were swooning over his goofy, dumb face while sipping on delightful brews in the sunshine. I had a hard time sharing his attention with others. He gave me one last sloppy kiss and I let him tend to the other googly-eyed beer drinking dog lovers. What a babe. 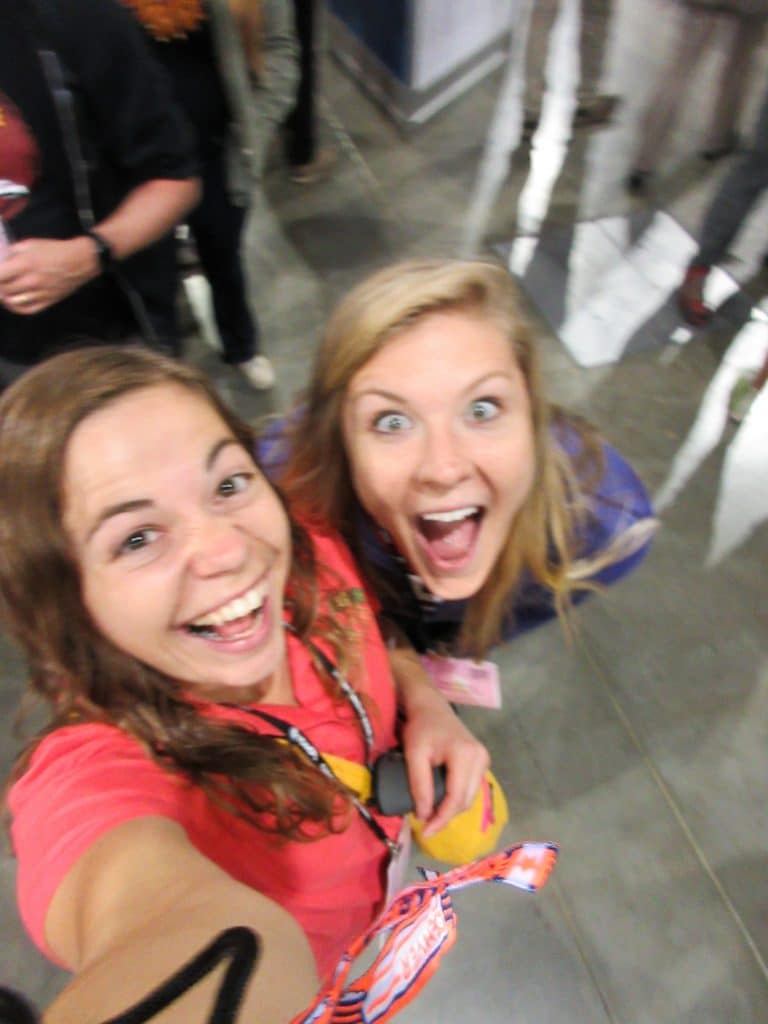 As fate would have it, we found ourselves at the fifth annual fifty firkin fiasco (say that ten times fast!) at Epic Brewing Company in Denver. Finding more than a few casks in one place, though the norm in England, is out of the ordinary in the United States. Finding fifty of them is a gosh-darned fiasco! Everything from ghost peppers to exotic spices were used to give Epic’s exciting line up a new twist. The 825 State Stout with Coco Puffs was my personal favorite. It tasted like saturday morning cartoons in the 90s, but for grown-ups.

As always, the photo booth was a hit! Nothing says “I’m having a good time” like fifty naturally carbonated firkins, a coconut bra, and a teenage mutant ninja turtle mask. If you’ve yet to freak out at the firkin fest, you had better make a plan to for 2018! Shout out to Krin and the rest of the Epic crew for throwing another killer party! 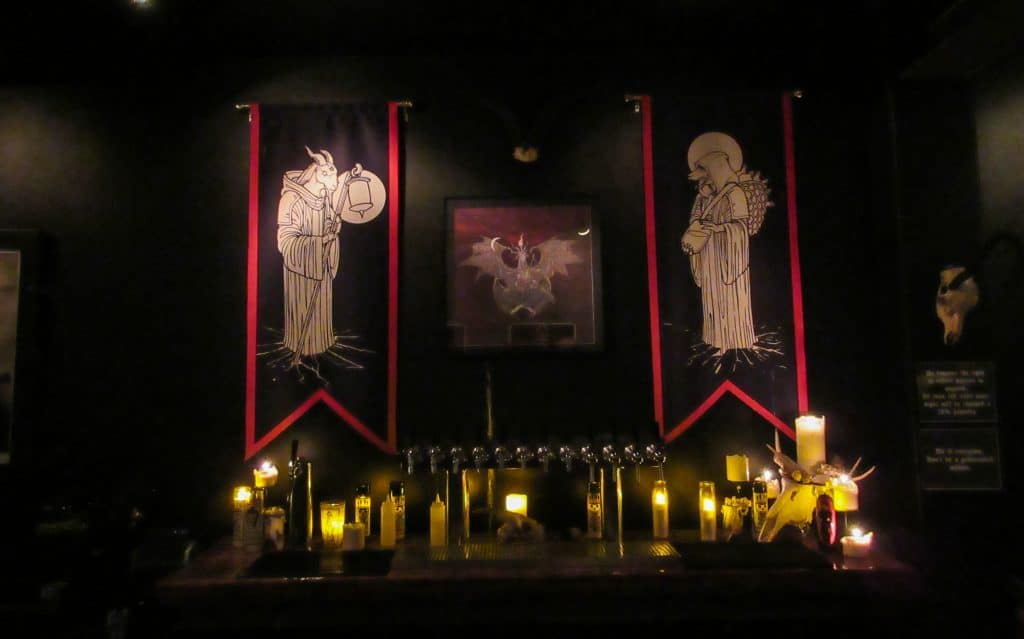 You’ve never been in a brewery like TRVE. With extremely dim lighting and a moderately high volume of heavy metal music, you’d think you had accidentally crashed an underground metal show. Catholic candles and red backlighting are some of the only glow by which to see your friend (or foe). It was surprisingly unscary! Julie and I headbanged and hair whipped until our necks were sore. No regrets!

Accompanying the darkness was a line up of incredibly tasty beer. My favorite by far was Cursed, which tasted subtly like key lime pie. I’m not talking key lime pie like a teenie bopper’s lip gloss. I’m talking drink it all day because it tastes like a whisper of citrus sunshine. The bright flavors suggested quite the opposite of the atmosphere, and made for an excellent contrasting pairing. 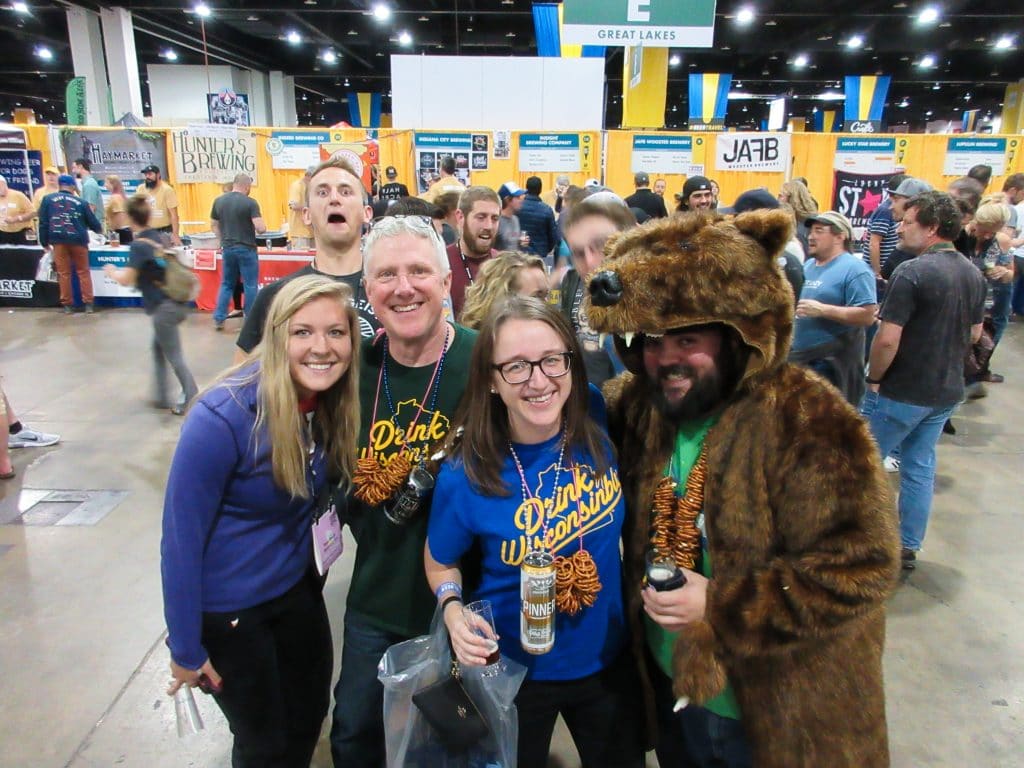 From the most outrageous edible necklaces to crazy outfits to a cheese paradise, the Great American Beer Festival sessions have all the beer you can drink and more! The rule I’ve heard for pretzel necklaces goes like this: If it fits on a necklace, it can come into the fest. I can’t attest to the validity of the rumored rule, but I did see some full sized pretzels, slices of pizza, and a magazine of pretzel “bullets”. If you forgot the necklace at home, there were numerous freebies of meat and cheese for those willing to wait in line. For a fest focused on America’s greatest malt beverage, they sure did have a lot of food! 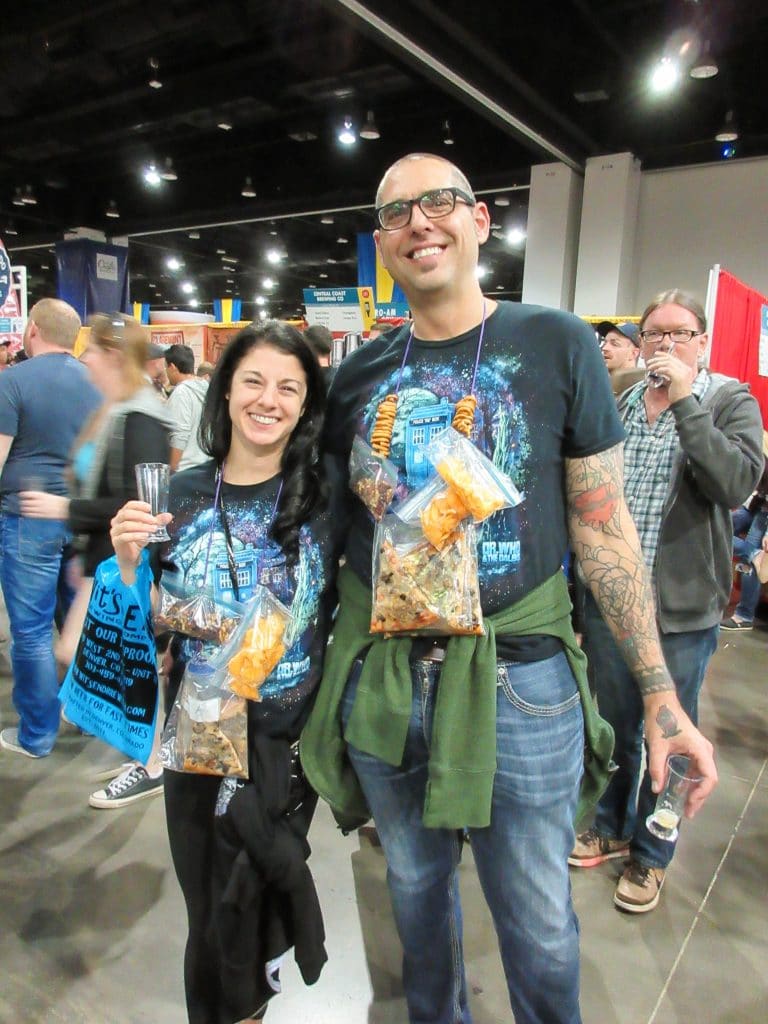 The best part of the Great American Beer Festival was the awards ceremony. Julie and I arrived haggard and gasping for coconut water. We sat down in the crowd of eager brewers, all of which were hoping to bring home more than just a hangover. My body was begging for the sleep I robbed it of the night previous, but I rallied. When they began announcing the Kellerbier/Zwickelbier category, I crossed my fingers a little more tightly. Bronze was called, then silver. You always hope to win a medal. But when two thirds of them are awarded for the category your brewery entered, you start getting comfortable with the idea this one just wasn’t for you. But it was! “Red Rock Brewing Company Zwickelbier” was announced for gold! My body was electric and my hangover was immediately eradicated. I high fived and hugged and said colorful words in my heightened state of being. It felt really good. 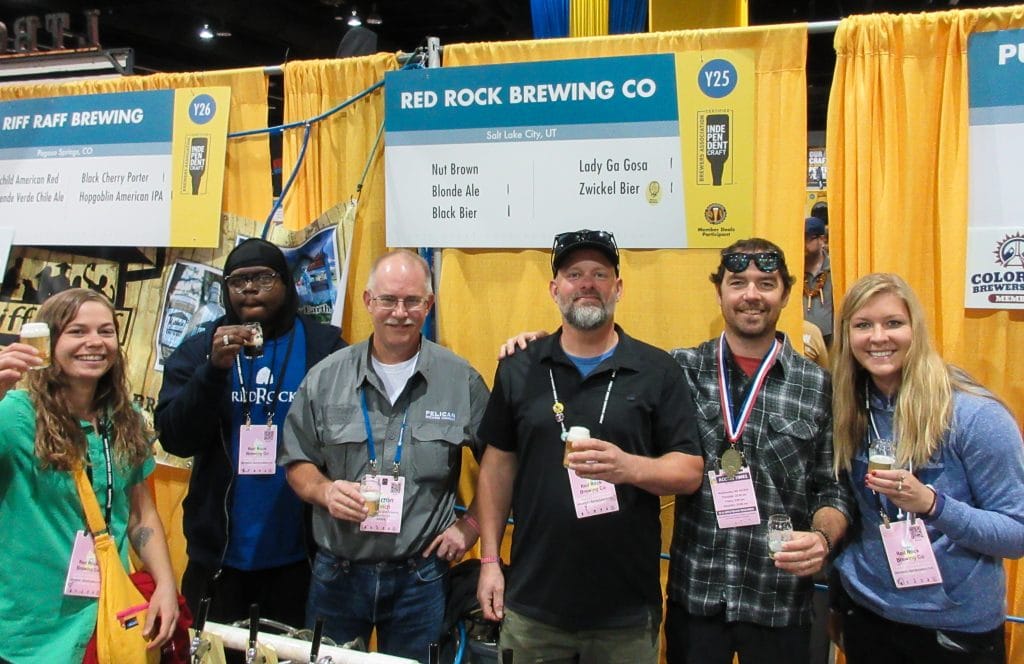 Congratulations to all participants and medal winners, especially our Utah neighbors at Squatters Brewing who brought home some shiny gold for their Belgian style golden ale, Hells Keep! Special thanks to Red Rock Brewing Company for making this amazing experience possible. I want to do it again and again and again!

Plan or no plan, gold or no gold, the Great American Beer Festival is an experience worthy of your time. See you next year! 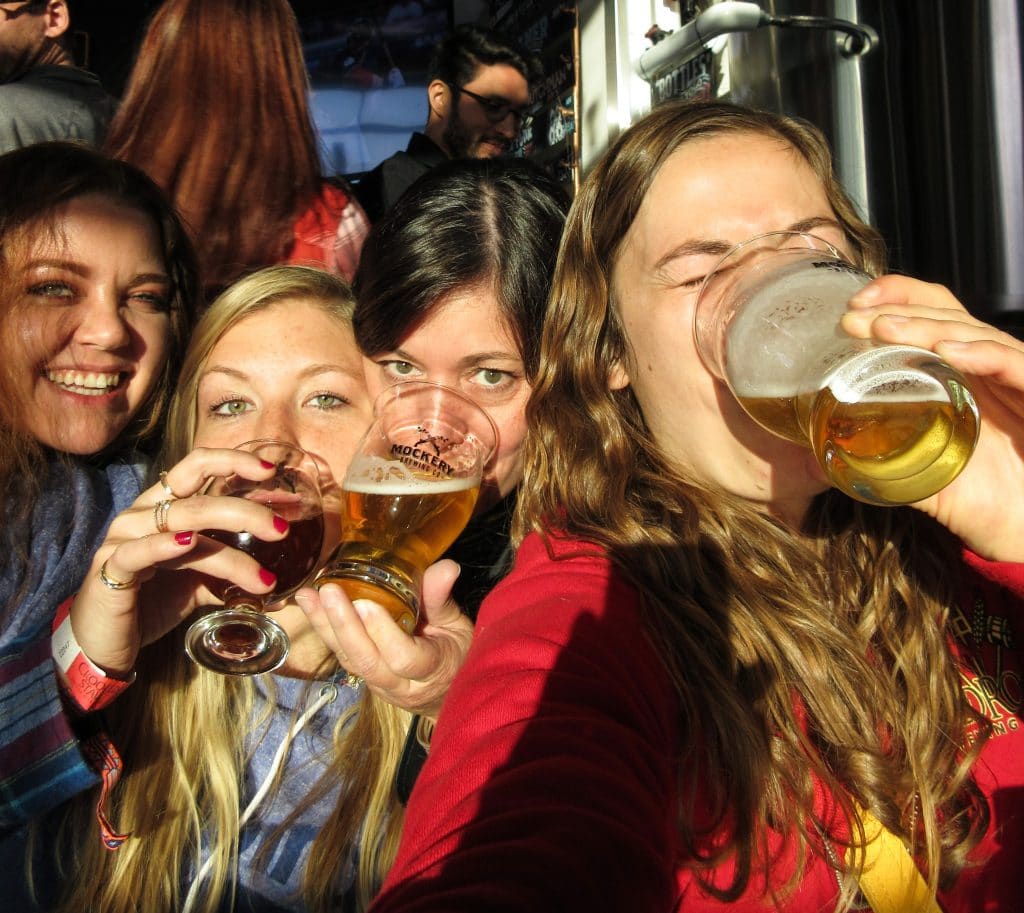