The journey to Santa Fe was incredible. My husband John and I had a wonderful time getting there, and you can read all about that in Bikes & Beers in Santa Fe Part 1. But, in this case, it’s all about the destination. We came to attend the Santa Fe Mountain Fest, and we were not disappointed! The event managed to provide a mix of a few of our favorite things: food, beer, music, and bikes. All of this in a beautiful setting, and a city we were exploring for the first time. It was a good first taste that left us hungry for more! 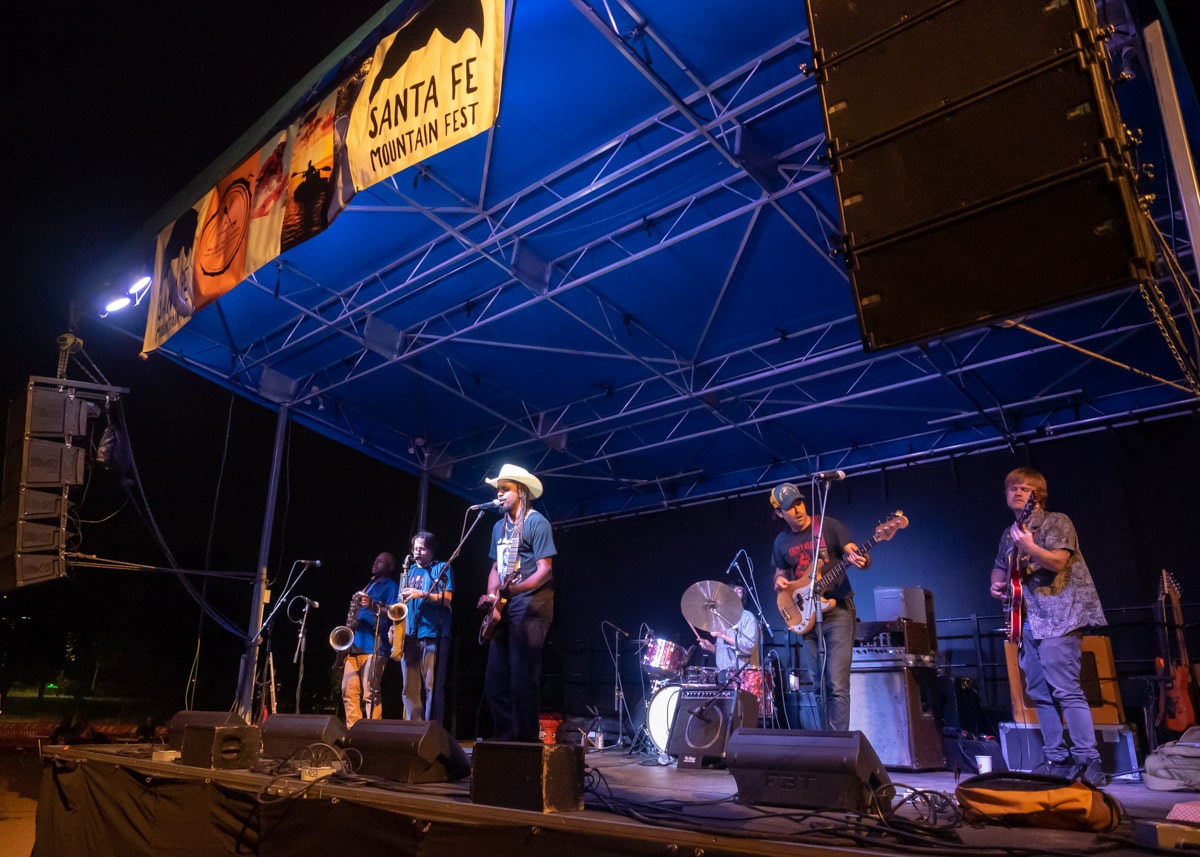 It was a mild Friday evening in mid-September. After visiting John’s friend, Bert Boyce, the brewmaster at Santa Fe Brewing Company, we headed to the Railyard Park in the heart of Santa Fe to enjoy the first night of the festival. A bike-in concert was in progress featuring the talented Black Joe Lewis & the Honeybears. A small crowd moved to the music while sipping beer from the nearby beer garden where local breweries served up the suds. Neighborhood food trucks satisfied hunger pains and provided fuel for dancing. It was an auspicious start to what looked to be a fun weekend in Santa Fe.

Saturday’s main event featured a host of activities presented by the Santa Fe Mountain Fest. The biggest was the Santa Fe Haka, a backcountry mountain bike marathon on some of the area’s challenging single track. Participants chose between 17 and 31-mile courses for a full day of grueling terrain. The Caja del Rio Gravel Grinder took riders of gravel and cyclocross bikes out for a tour of Santa Fe on dirt roads and single track. The Funky Trails & Shortcuts city ride showed folks how to navigate the city using little-known trails and shortcuts to avoid traffic and maximize fun! Guided trail rides for beginner and intermediate mountain bikers utilized the nearby trail systems accessible from town. A point-to-point trail run was available for those keen on using just their two feet.

There were also options for the foodies and beer lovers in attendance. Tour de Nosh was a mid-afternoon tour for cyclists interested in experiencing the city’s artisanal food scene. But it was Tour de Brewer that most interested me. A bike tour of Sant Fe’s local breweries? Sign me up! I grabbed my mountain bike, helmet, and beer-themed socks and showed up to the starting point at the Railyard Park ready for a fun day of pedaling and beer drinking. Our fearless leader was Pat Brown, a member of the Santa Fe Fat Tire Society. He guided us through the city on bike paths and streets to three different brewery stops over a total of about 14 miles. I was impressed by the number of bike paths there were and was happy to avoid riding in traffic most of the time. 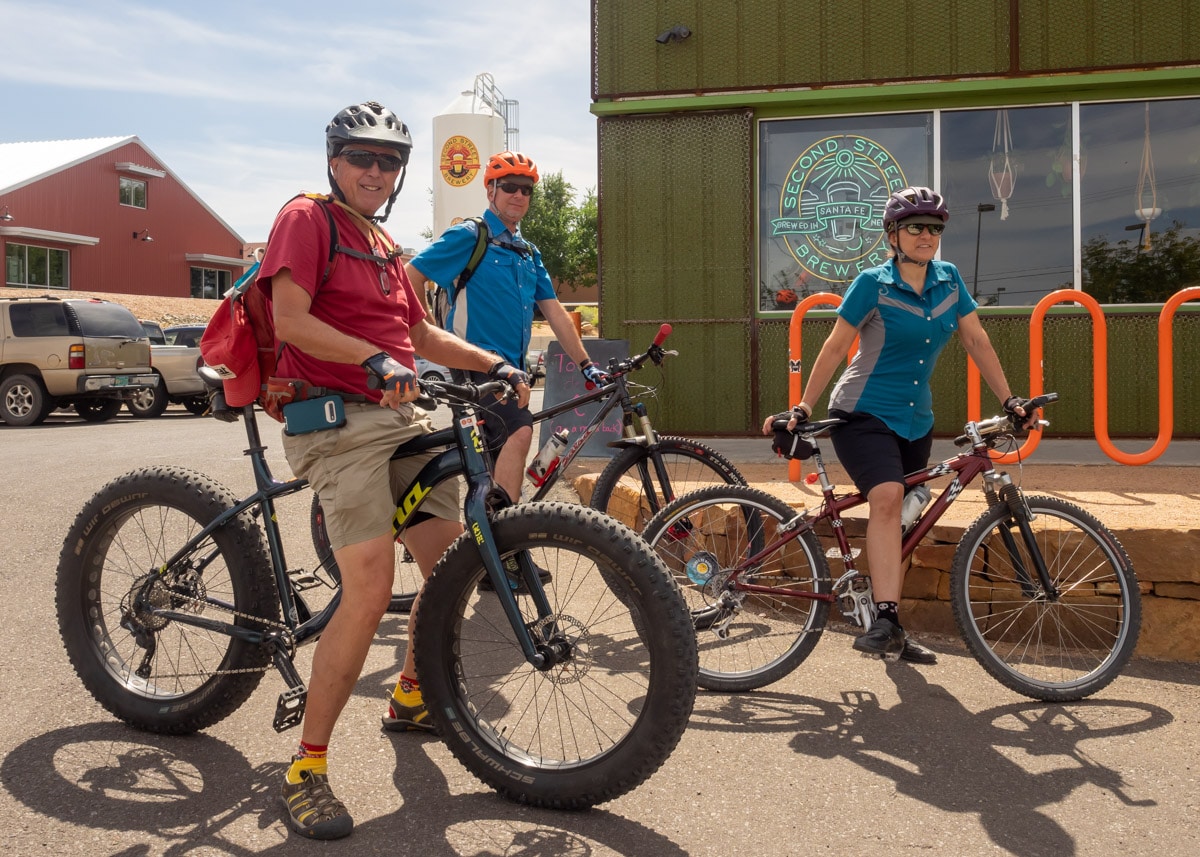 Our first stop was the 2920 Rufina Taproom of the Second Street Brewery. It’s their third, and newest, location, and it houses a 20-barrel production brewery and packaging facility. The original brewery on Second Street is about half the size, but it is still in operation since opening in 1996. They also have a small taproom near the Santa Fe Farmers Market in the Railyard district which I was able to visit later due to its proximity to the festival. 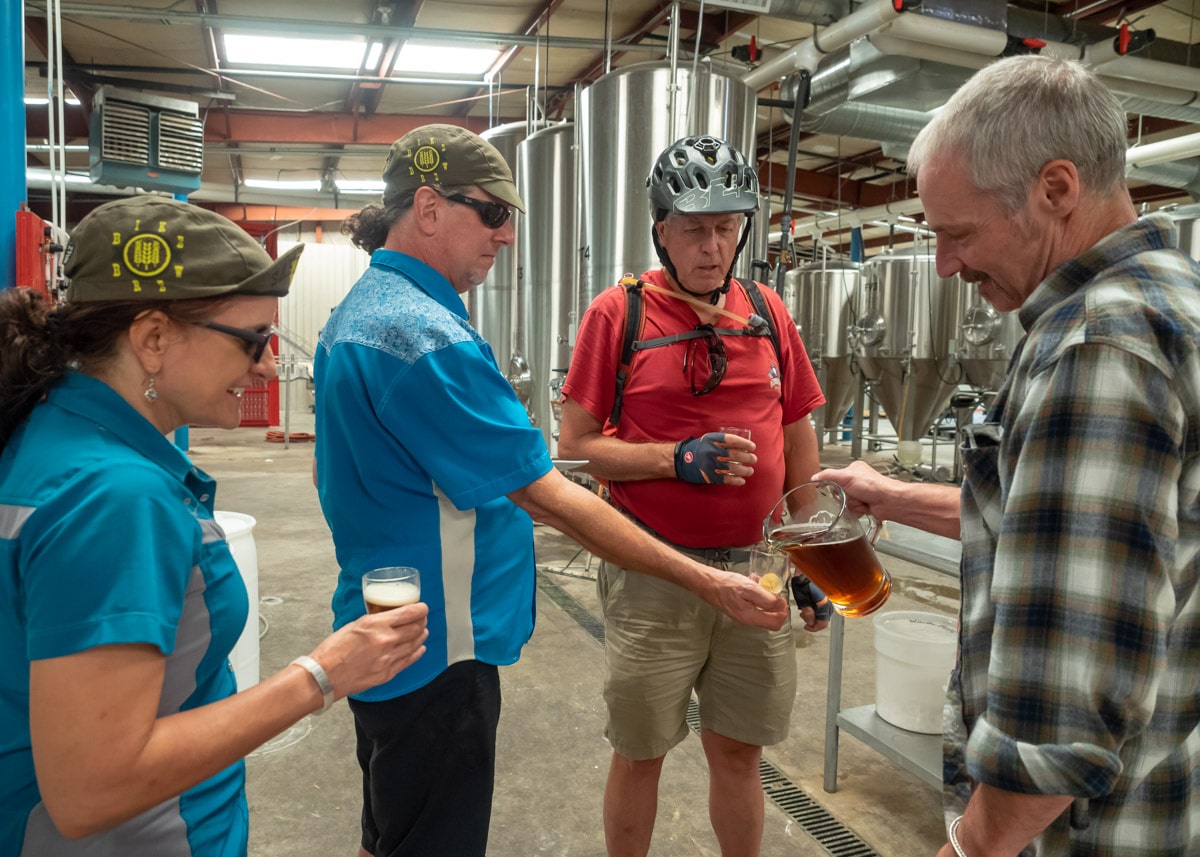 When we arrived at the Rufina Taproom, we were able to pedal right into the brewery where we received a warm welcome. The brewers took a break from their work to serve us samples of several styles of Second Street beer along with a light snack. They gave us a tour of the brewery while we sipped and even let us drink an IPA right from the brite tank! Tour de Brewer was off to a great start! 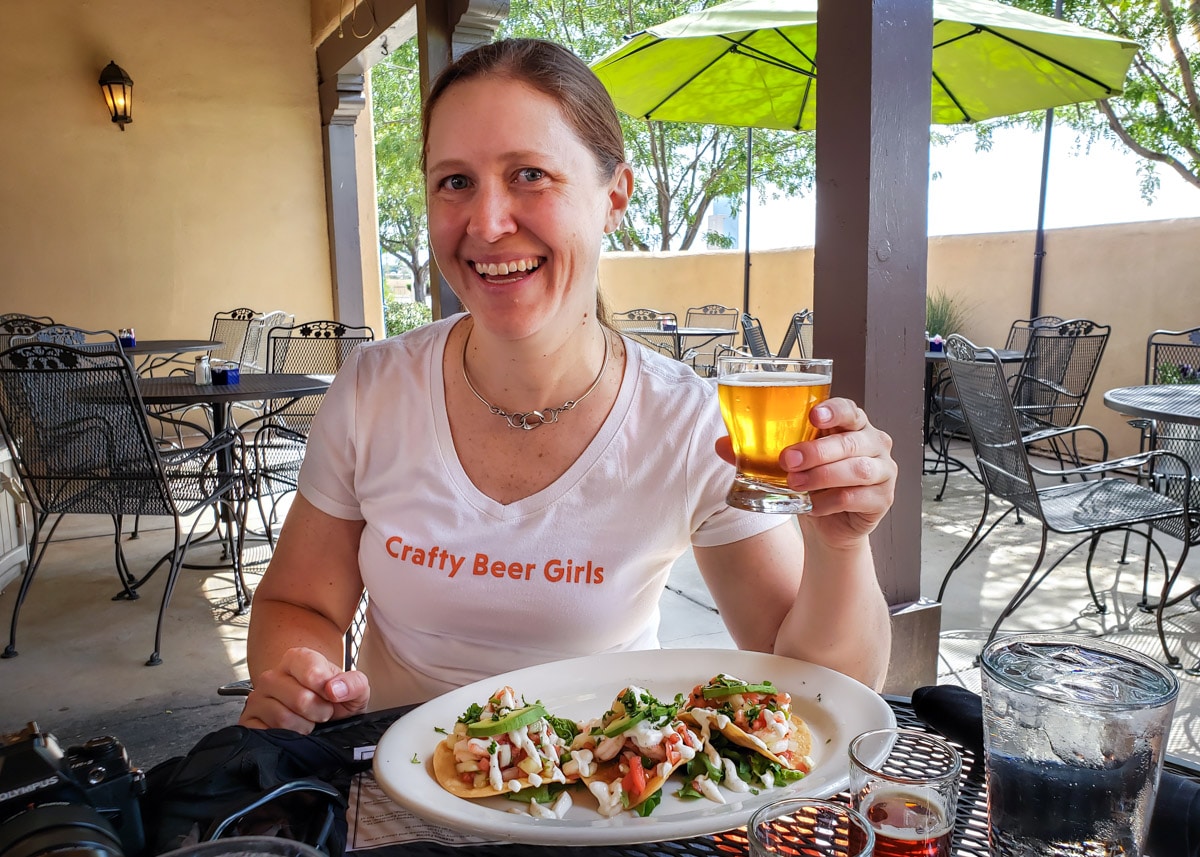 Stop number two was the restaurant and brewery, Blue Corn, where we were seated on the shady outdoor patio and served samples of some of their seasonal beers. We toasted the day with an Oktoberfest Märzen style beer and chuckled at the name of a hibiscus wheat beer called “Fustercluck.” We all agreed that the rich and malty Scotch ale was our favorite. This brewery is also known for its fabulous contemporary food inspired by New Mexican culture. I ordered the shrimp ceviche tostadas to pair with the light and refreshing apricot sour. They were delicious! The quaint adobe building, located in a bustling mall district, is the perfect place to slow things down a bit. Serving Santa Fe since 1997, Blue Corn is one of New Mexico’s old guard, and a worthy stop on the tour.

Hey, I was just here! The third stop of our brewery tour took me back to Santa Fe Brewing Company’s sprawling headquarters. The brewery has a few satellite locations around Santa Fe and Albuquerque, but this is where the magic happens. There are multiple places to drink here at the main location. They have the original taproom, which isn’t always open these days, and often serves as a space for employees. Then there’s The Bridge, an indoor and outdoor beer garden, taproom, and music venue that hosts live shows year-round and is available for events, weddings, and parties. A new, much larger beer hall was still under construction, but will serve as the new main taproom and feature an outdoor beer garden that will stay lush and green courtesy of the brewery’s water reclamation system. 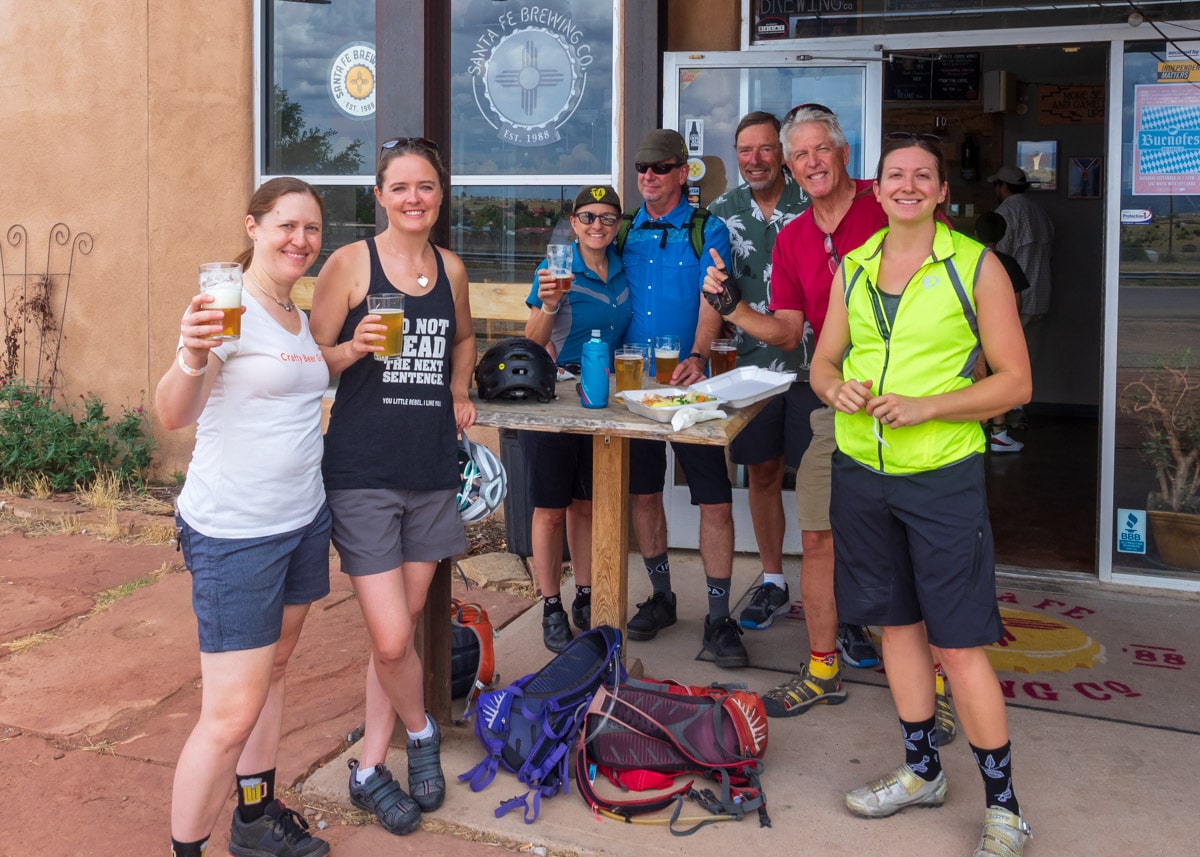 When Tour de Brewer arrived, the original taproom was open. The brewery bought our first round, and we lounged around the front yard drinking and reflecting on the day. Some took advantage of the food truck, and we for the most part decided to wind things down after what had been a long day of riding and drinking. Lucky for us, we didn’t have to pedal all the way back to the Railyard Park. Instead, we rode to the nearby train stop and took the New Mexico Rail Runner back into town. I was feeling a bit tipsy at this point and was grateful for the ride. 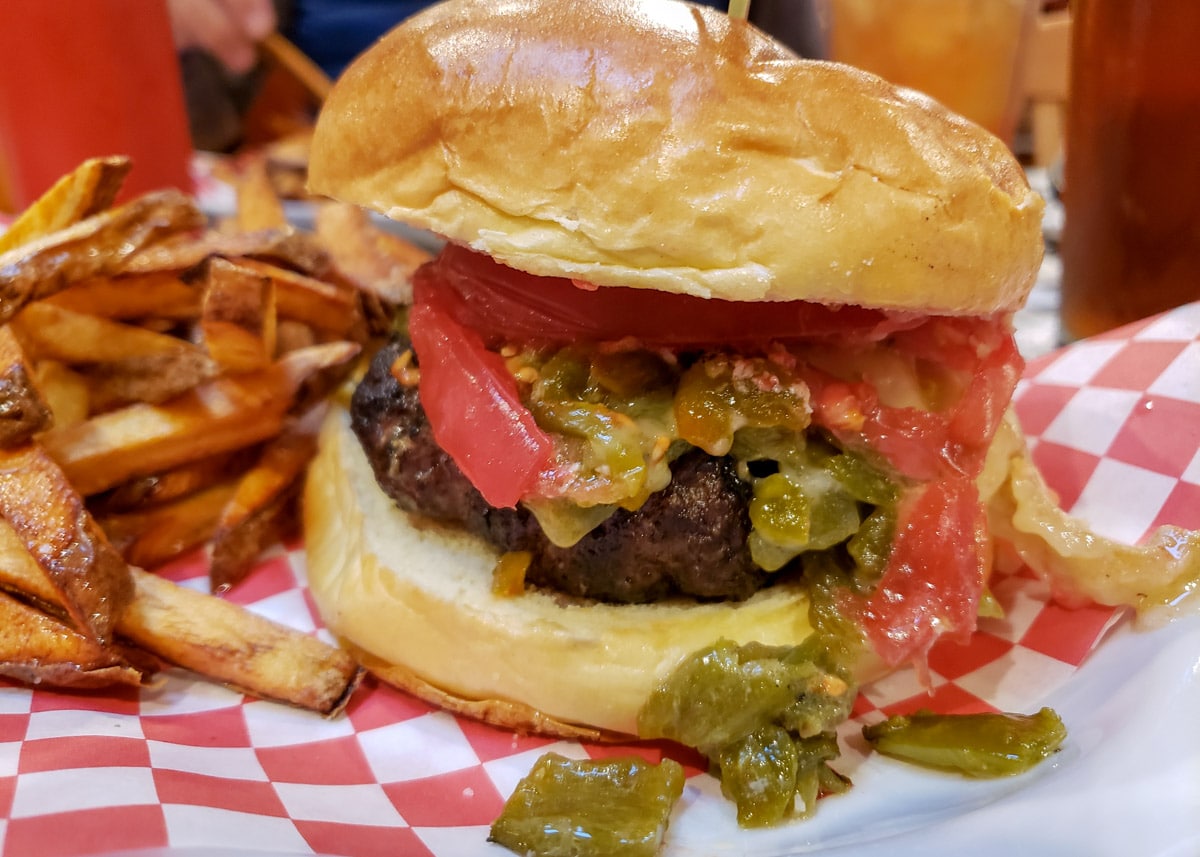 Back at the Railyard Park, Tim Fowler, who runs the Santa Fe Mountain Fest, was keeping an eye on the weather. Dark clouds had been threatening rain for much of the day, and it looked like things might be about to break loose. Santa Fe is known for unpredictable weather, and a day of both sun and rain is not uncommon. Unfortunately, the rain did come down, forcing Tim to cancel the evening’s festivities. Instead of enjoying more live music, we all took shelter and called it a night. John and I comforted ourselves with green chili cheeseburgers at Cowgirl so the night wasn’t a total loss.

Sunday was “trail day” out at Galisteo Basin Preserve where the Santa Fe Fat Tire Society has been building new trails. All were invited to do trail work and ride the newest trail they’ve been working on. The trail system, located just south of Santa Fe, is desert riding at it’s best. Trails wind in and out of arroyos and over rocks, weaving around cactus and juniper. When higher elevation trails are covered in snow, this trail system is sometimes the only thing rideable. There are a few technical lines to play on, but the trails are friendly to all riding levels.

It was another day of threatening clouds, but the weather held for the most part. We got sprinkled on here and there, but we managed a fun, 5-mile ride with Tim Fowler as our guide. Riding the newly built trail helps to establish it and keep the grasses from taking over. As we rode, we came across volunteers putting their tools to use, working together to put the finishing touches on the new flowy section of trail. It’s great to see the local mountain bike community taking stewardship of their beautiful natural resources, and helping to make the sport sustainable, accessible, and fun for everyone. When we finished our ride, Tim suggested a little brewery he knew of for lunch. We enthusiastically agreed and followed him there. 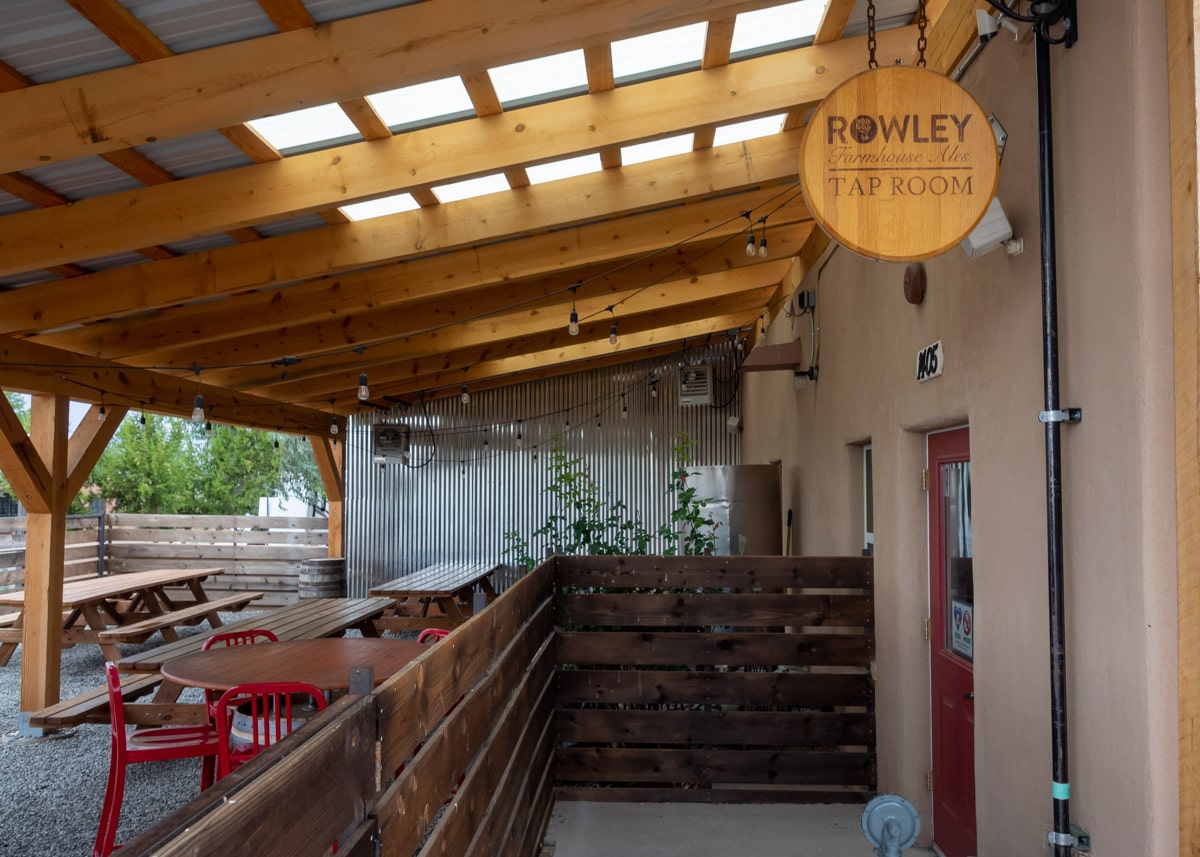 The unassuming brewery was tucked away on a side street somewhere in Santa Fe. We walked into the dark little taproom and headed outside to their lovely patio. The rain started, but we were sheltered under a sturdy awning, and we tucked ourselves into our seats at one of the long picnic tables. The menu was extensive, with selections of beer from a host of other breweries along with a handful of their own. As the name suggests, Rowley specializes in farmhouse ales, sours, and wild fermentation beers. But they do brew conventional styles like IPAs and stouts as well. The food looked fantastic! 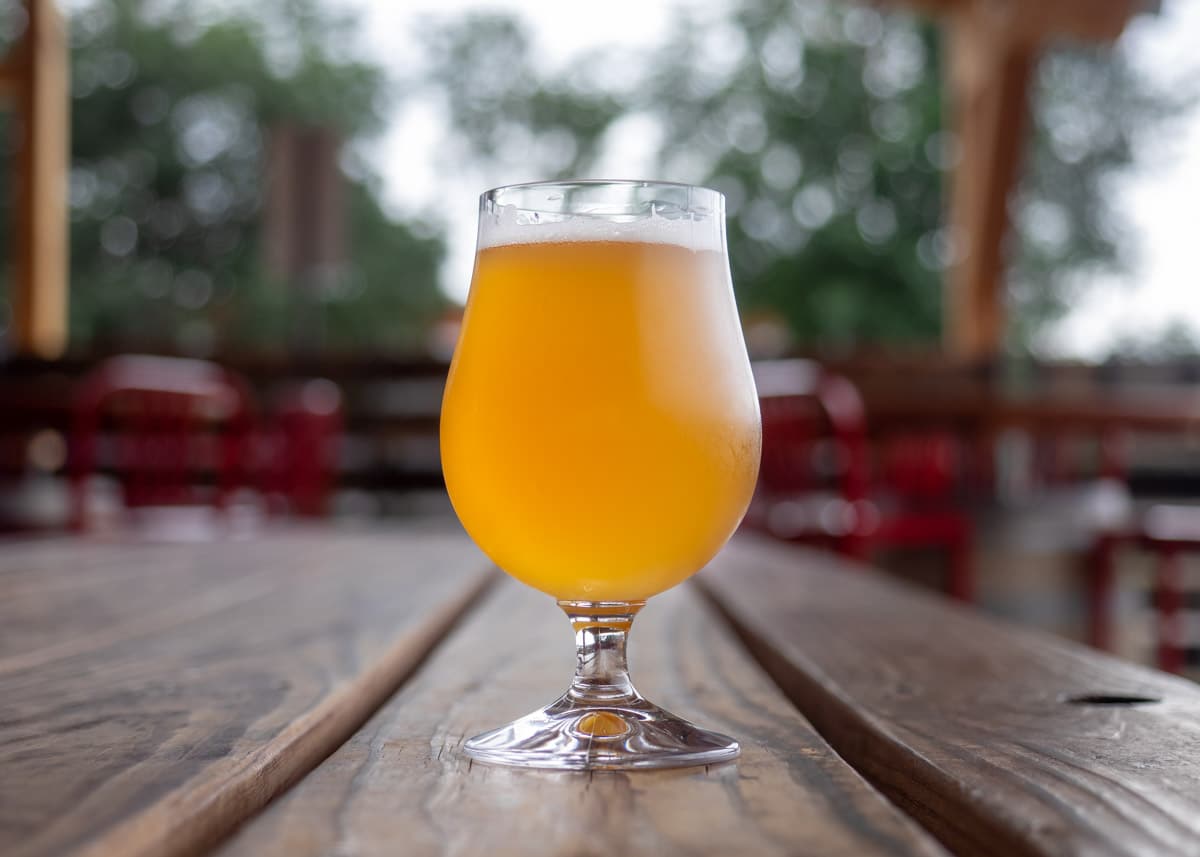 We started things off with the Green Chile Cheese Fries bathed in a decadent cheddar cheese sauce with roasted green chiles. I paired it with a glass of the foeder-fermented classic saison, Fields of Rye, one of the brewery’s core offerings. It’s a welcoming traditional saison, with earthy hints of banana and spice, and a dry finish. 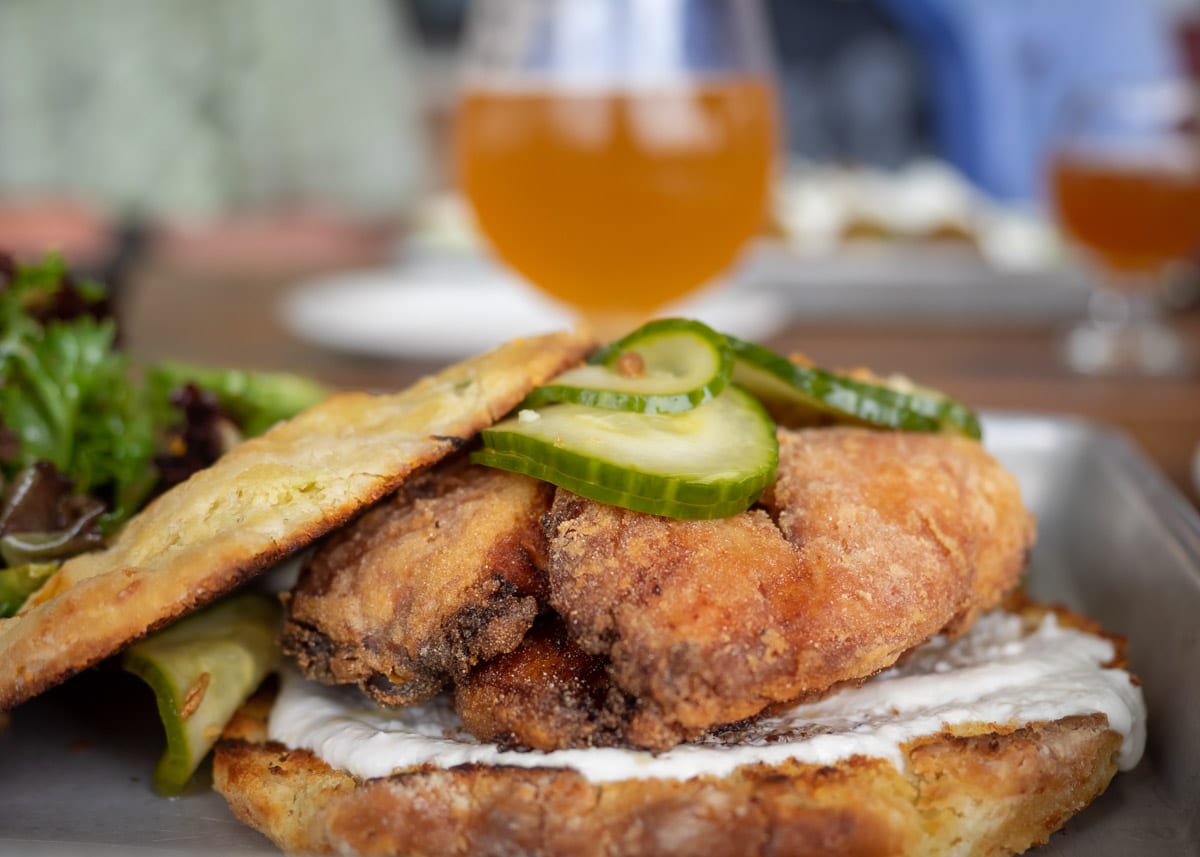 The rain had me gravitating toward comfort food, something the menu seemed to have plenty of. The Chicken Biscuit Sandwich fit the bill. Fried chicken accented by horseradish crema and house-made pickles on a cheddar cheese biscuit put a satiated grin on my face. My husband was equally sated by the Shrimp & Grits made with local pork andouille sausage and red peppers over Santa Ana Pueblo cornmeal. If there is one thing we enjoyed in New Mexico above all else, it was the food! 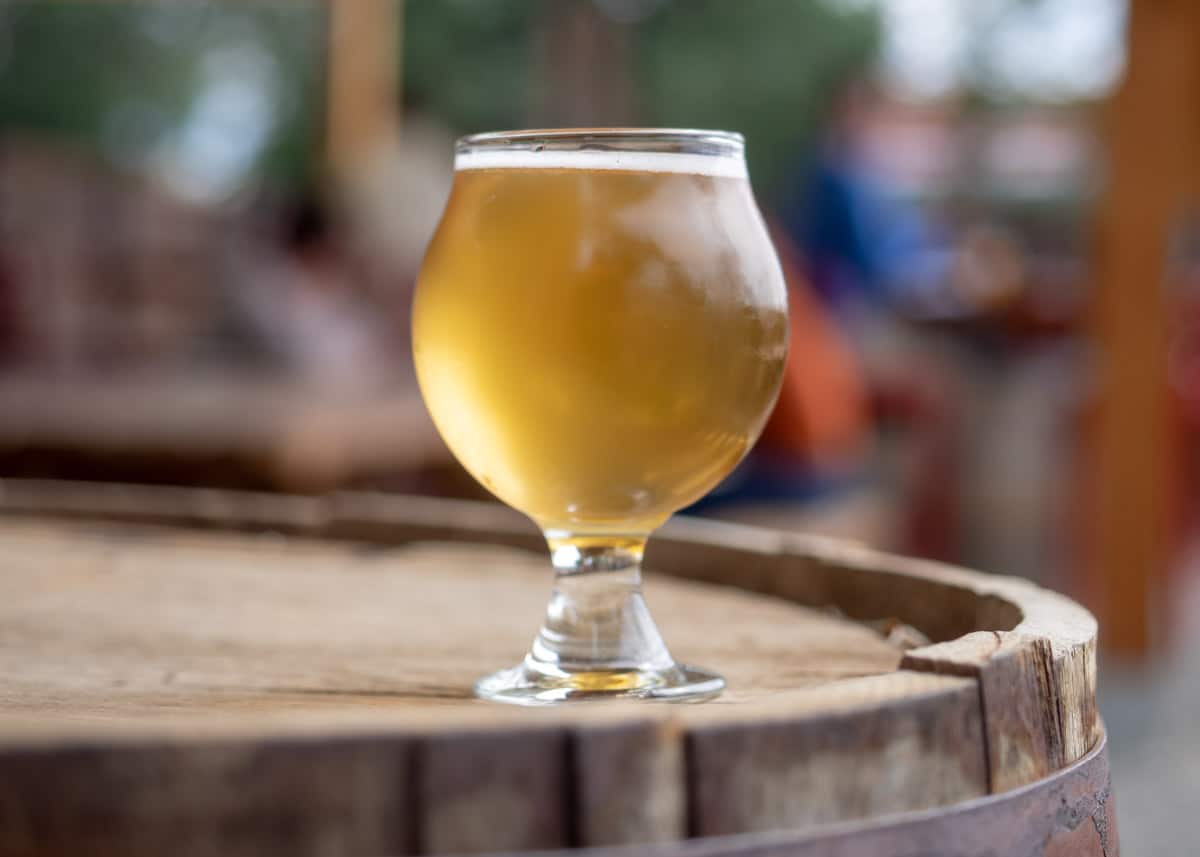 I was able to try samples of a few other Rowley beers on draft. Most notable was the Germophile Berliner Weisse, a 2018 silver medalist at GABF (Great American Beer Festival). It had the tart lemon flavor and dry, refreshing finish I would expect from the style. What I couldn’t have known as I sat there and enjoyed my visit to Rowley Farmhouse Ales, was that they would soon win three GABF medals and the 2019 Small Brewpub of the Year! In fact, Rowley was the brewery that won the most medals at GABF this year, a total of three. With so much competition it’s not easy to win more than one medal at the national competition that received 9,497 entries from 2,295 breweries, and they’ve only been open since 2016. Bravo! 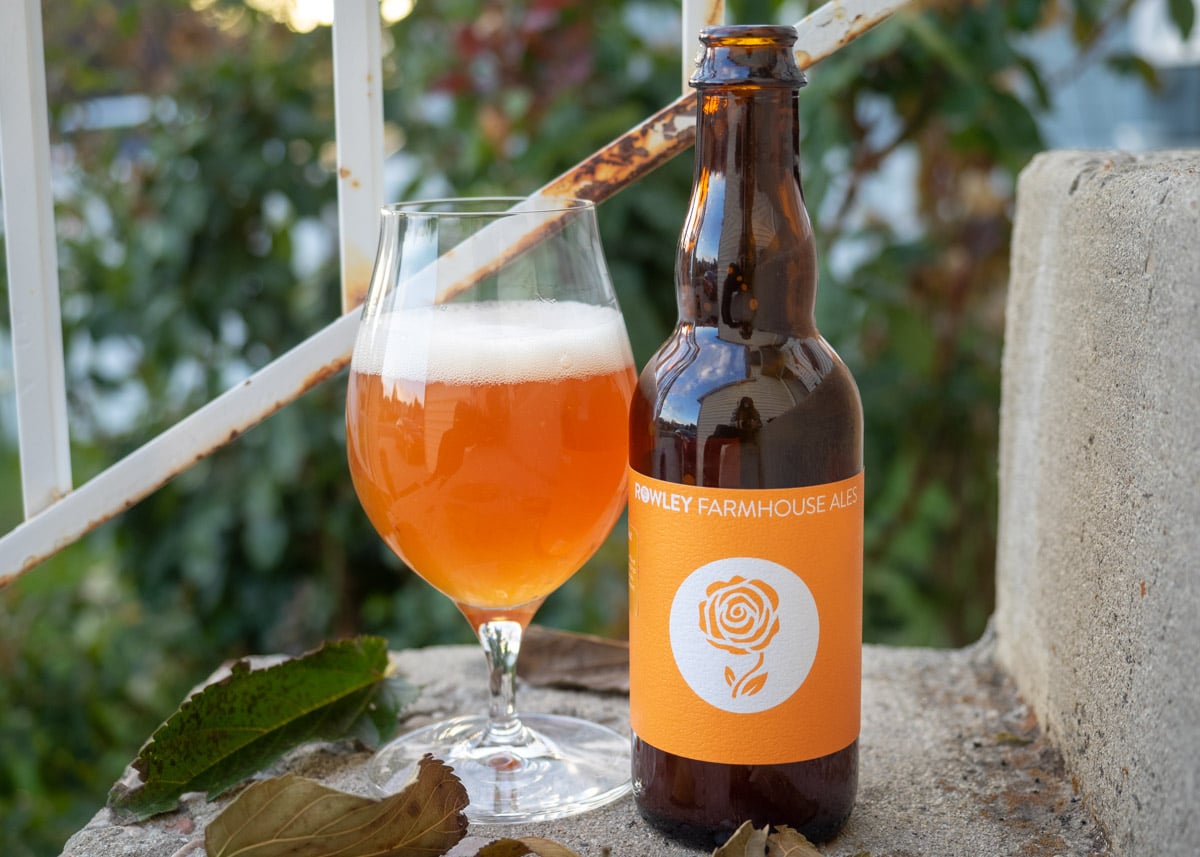 Besides the beer I was able to drink at the brewery, I also took a couple of bottles home with me. The Côte d’Or Cerise Redux is a version of a beer they just won a bronze medal for in the Mixed Culture-Brett Beer category. It uses cherries from the winning edition, Côte d’Or – Double Cerise, that are not yet spent. They provide a more subtle fruit character to the beer. It was divine! I also acquired a bottle of Songs of Our Own, a spontaneously fermented tangerine wild ale.

I must thank Tim Fowler for taking me to Rowley Farmhouse Ales on what turned out to be the grand finale of my trip to Santa Fe. It was shortly after our meal there that we headed out of town on our trek back home to Utah. I can’t deny it; this trip left me wanting more. I know I say that about a lot of places I visit, but New Mexico really was special. I’m already dreaming about a return trip for a second helping of trails, beer, and chile-based foods. This was just a sip.