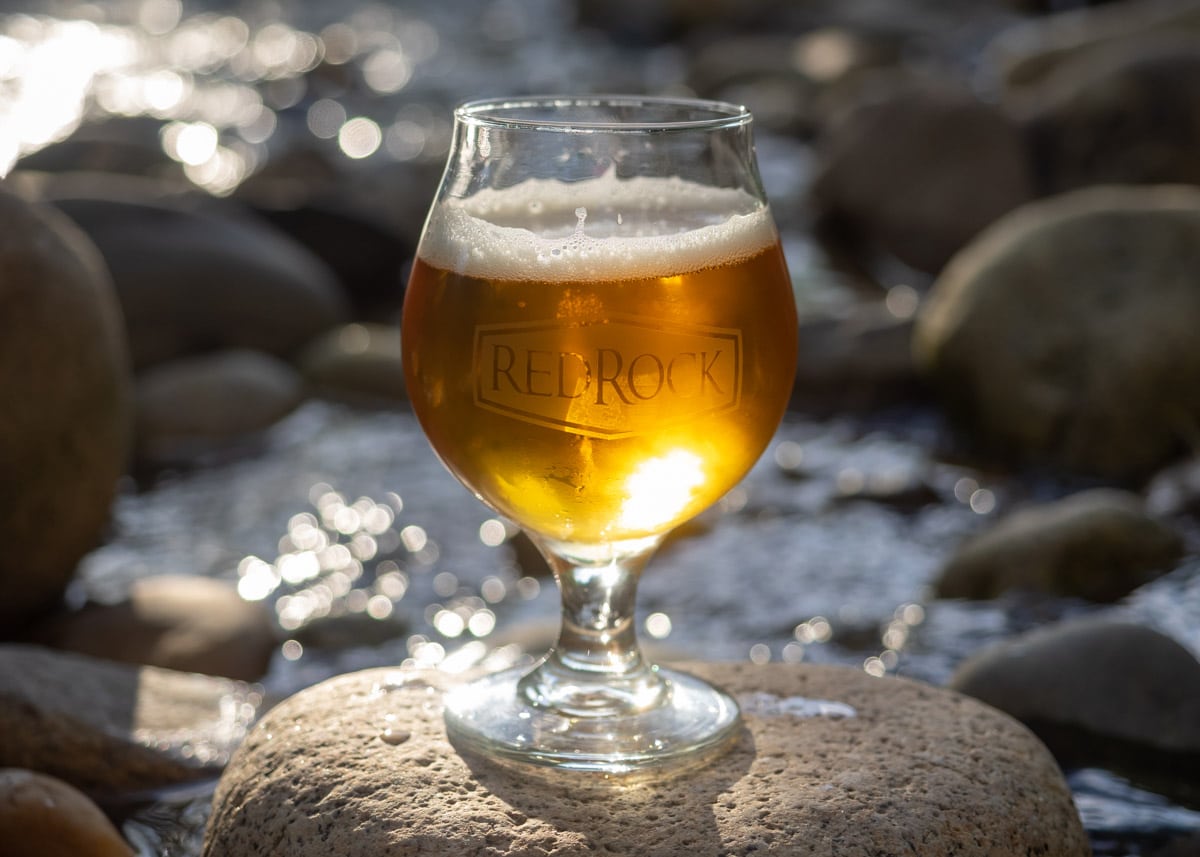 Since 1994, Red Rock Brewing Co. has been a fixture of the Utah brewing community. The Salt Lake City brewpub started out as one of three in the city and has enjoyed much success since its opening. Over the past 25 years, rather than pushing for growth, Red Rock has stayed small and humble, currently producing just 5,000 barrels of beer a year. Money that could be spent on advertising is instead used to support local nonprofit and charity organizations. This, along with an emphasis on employee benefits and top-quality products, makes Red Rock stand out, not as the most profitable brewery, but certainly as an asset to the public it serves. 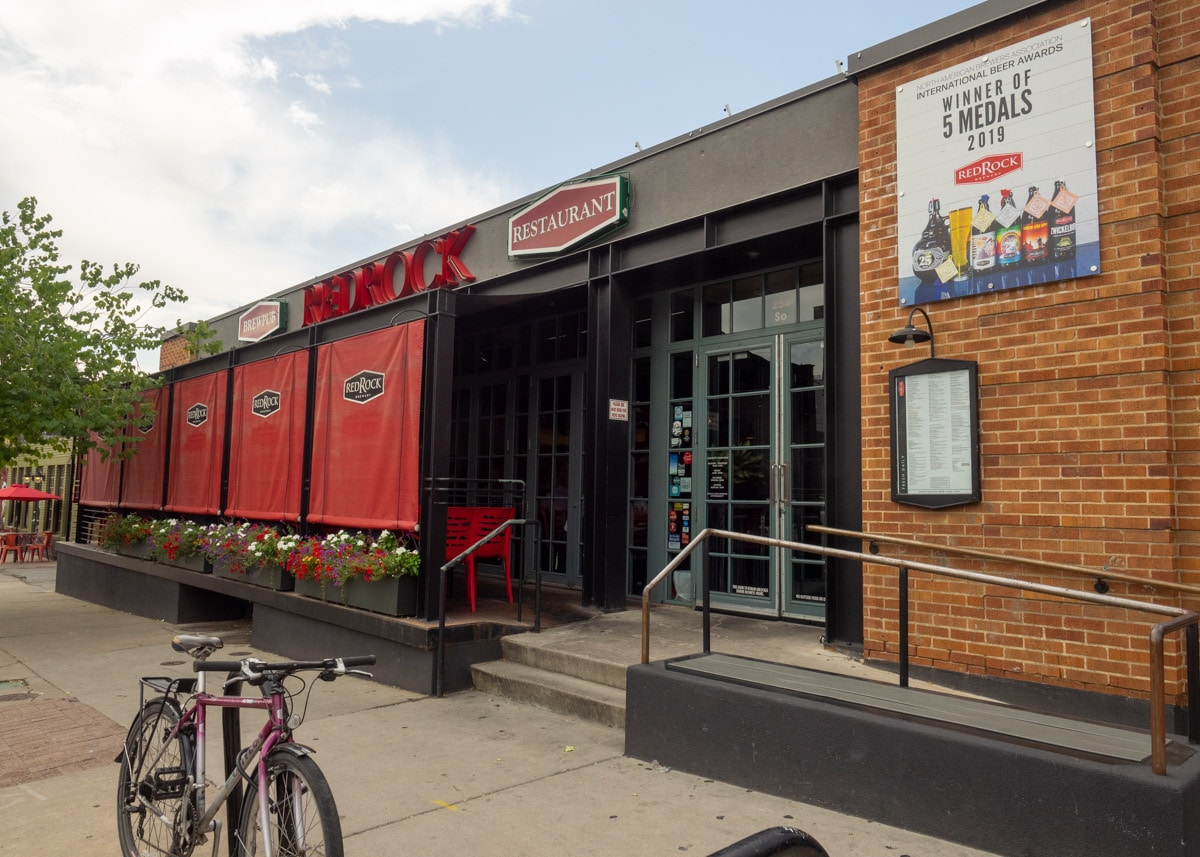 As Red Rock celebrates its 25th anniversary this year, let’s reflect on its journey from the original downtown brewpub to the opening of two more locations in Park City and the Fashion Place Mall in Murray, as well as a production brewery and beer store in Salt Lake’s Marmalade District. This coming spring, Red Rock hopes to break ground on a new production brewery that will help it keep up with growing demand as new head brewer, Kevin Davis, works to improve on an already solid foundation built on award-winning beers. Owner Bob Jensen endeavors to continue with Red Rock’s legacy of excellence. “For me personally, it’s more about being part of the community, having employees that are well taken care of as best we can, and doing things that are the very highest quality that we can do them,” says Bob. “When I look back across that path, it gives me more satisfaction than another zero in my checkbook.”

From the beginning Bob Jensen has considered the business to be employee centric. “The way I see it, it’s a brick building with some machines in it, but the business is the employees. That’s all it is,” he says. Red Rock ensures that employees have access to health insurance and considers them part of a “family.” There is even a sort of internal welfare program they call “the fund” that everyone contributes to as a safety net for any employee who finds themselves in need. Red Rock’s events coordinator, Chuckie Lowe, explains, “This has kind of been our foundation [for] the whole business. We make sure to take care of one another.”

Red Rock’s sense of duty extends beyond caring for employees. Chuckie oversees more than 150 outreach events each year, many of them in support of local nonprofits. “Years ago, we decided that spending money on advertising was kind of a moot point because everyone knew who we were,” he tells me. “We decided to take that money and give back to the community because the community made us.” In addition to donating time and resources, Red Rock will often donate gift baskets for auction to help organizations raise money. They look to sponsor groups that fight cancer, encourage health and fitness, focus on women’s issues, help animals and the environment, and support minority groups. “Anything that we can do to give back to the community, we do.” Chuckie encourages anyone with a cause in need of help to email him at william@redrockbrewing.com.

There is one contribution in particular that Red Rock has given to the beer community. You might be familiar with it. This blog!! That’s right, Crafty Beer Girls was born from an idea Bob Jensen had to give a literary voice to a couple of women who are crazy about beer. He’d taken note that both Lauren and I enjoy writing, and we have an intense passion for beer. “I just put it together,” Bob explains. “In my mind I thought, how cool would it be if they wrote articles from a woman’s perspective and started educating women more about beer.” So, he introduced me to Lauren, supplied us with a platform, and gave us complete creative control to write whatever we want to write about. “Writing is a very powerful tool,” he says. “It stays, and once it’s written, it goes on and has a life beyond the day that you write it.”

I couldn’t agree more! Writing this blog has been an adventure and a huge learning tool for me. There was so much I didn’t know about beer, and there is still more yet to discover. If we can share our enthusiasm with others and inspire a few to appreciate beer a little more, we are doing our job. Beyond that, it would be great to show that women are very much a part of the beer community and brewing industry. “You don’t see a lot of women with boots on brewing the beer,” observes Bob. “We need to encourage women here. There’s a very big open door. There’s no reason that they can’t participate and be part of it.” Cheers to that! 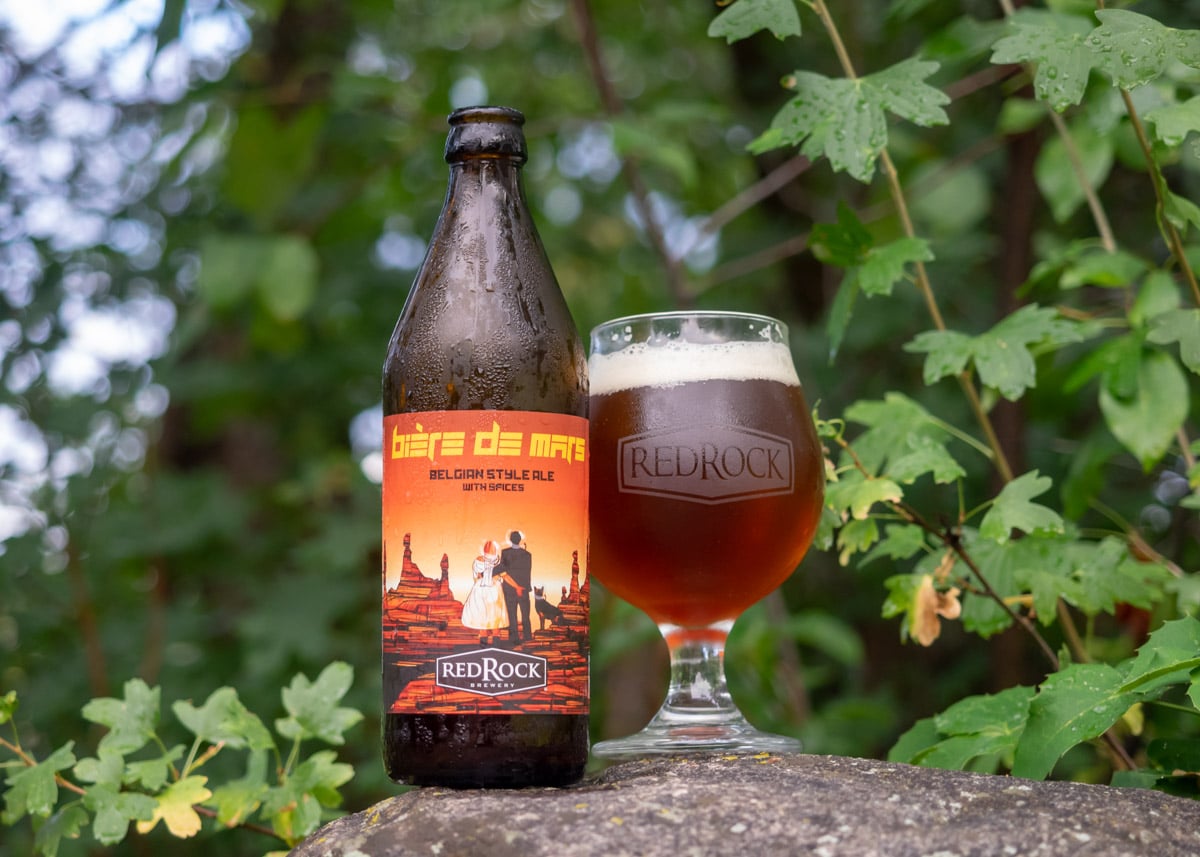 I love that Red Rock has a philanthropic side, but what really impresses me is the beer. Their long-time award-winning brewer, Kevin Templin, moved on to start his own brewery, Templin Family Brewing, but the accolades for Red Rock beer have continued. In April of 2018, Kevin Davis left his job at New Belgium to become Red Rock’s new head brewer. He’s worked to enhance the existing portfolio while also looking ahead at what’s next. The first new beer Davis created was the Belgian-style Bière de Mars. It won a bronze medal at the International Beer Awards in Idaho Falls. Red Rock won a total of five medals at the 2019 competition, more than any other Utah brewery, including a gold for Marvella (Belgian tripel) and silver for White Rainbow (white IPA). “That was a good feeling to win a bunch of awards,” says Davis. “It was good for the team to go through all the changes that this place has gone through, and then get a little validation that we’re doing some good stuff.”

Davis looks at the creation of new Red Rock beers as a group effort. “As far as innovation goes, I’m really pushing to innovate as a team and not just be the head brewer that makes all the recipes,” he says. Davis acquired a 5-gallon system to use for test batches and has encouraged the other brewers to share ideas and help create recipes. Brewer Andrew Rinaldo came up with Red Rock’s newest beer, an American Imperial Pilsner called Otto. This beautiful gold-colored beer is dry-hopped with American hops, Cashmere, Callista, and Citra so it’s hoppy without being bitter. Available now at the beer store and pub locations. 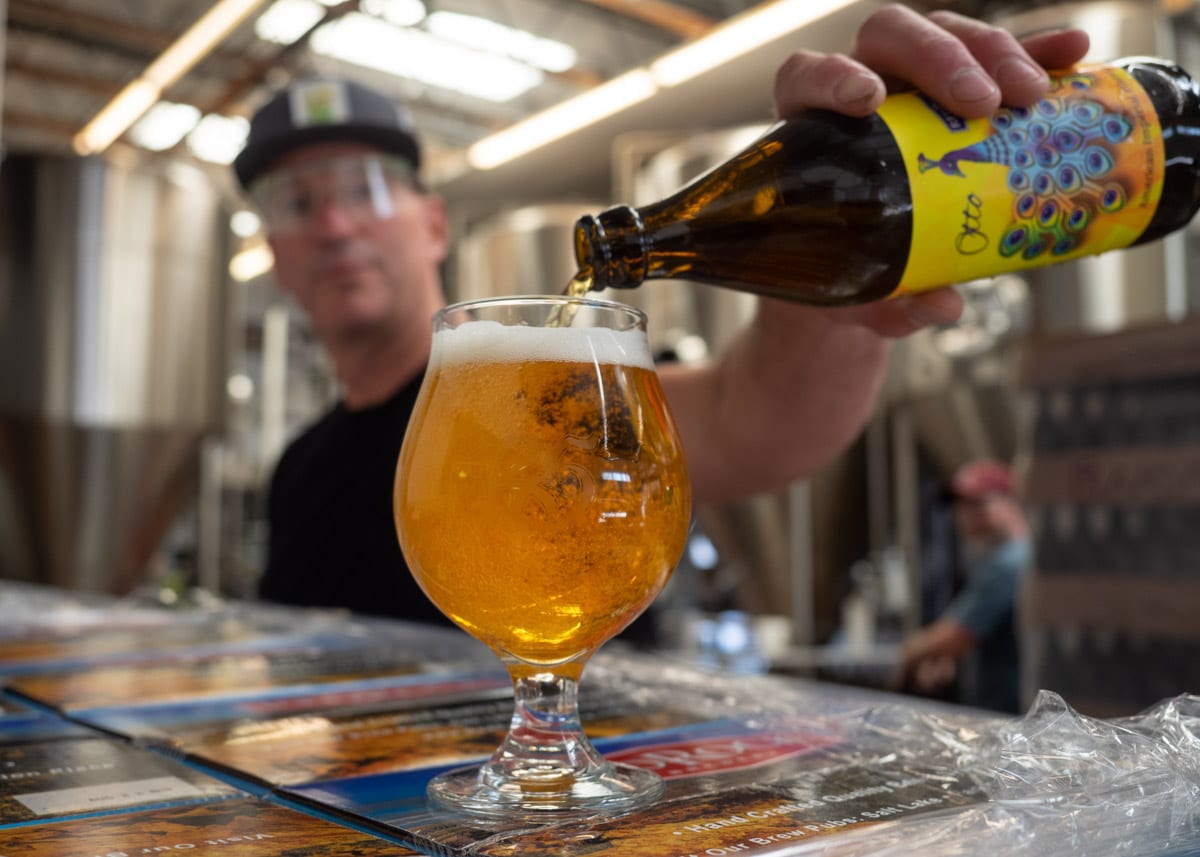 Up next is Buffalo Point New England IPA, dreamed up by brewer, Ryan Murphy. This beer is still waiting on label approval and hasn’t been brewed yet, but it will feature some experimental hops from Hopsteiner nicknamed “berry bombs” and El Dorado hops. Davis is excited to give the style a try. Red Rock’s downtown pub brewer, Chris Harlin, brewed a NEIPA called Juice Almighty for draft, but this will be the first time the production brewery releases a companywide high-point NEIPA in bottles. It’ll have a pretty label designed by Mike Tea who also designed the label for Bière de Mars. My expectations are high for this one. Red Rock is known to brew excellent IPAs, if their Elephino Double IPA and White Rainbow White IPA are any indication. 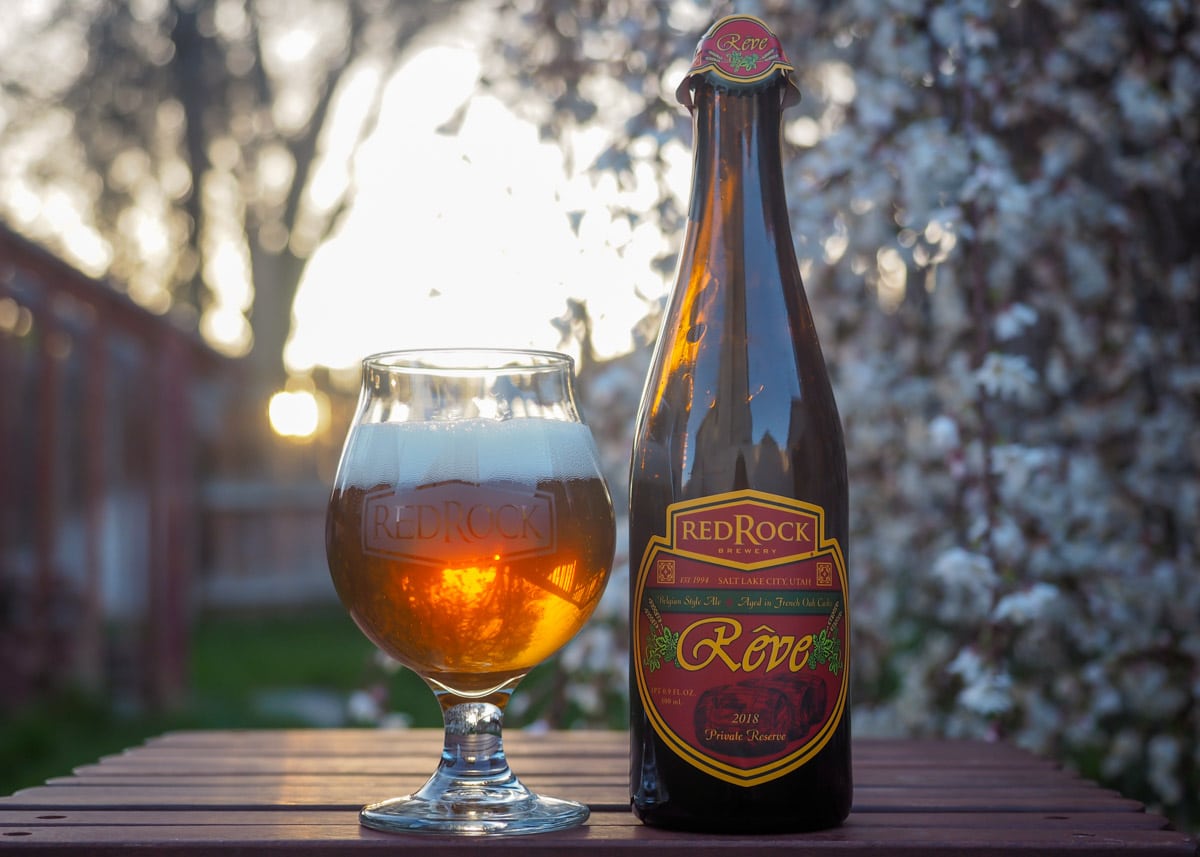 As new beers come into rotation, Davis is doing his best to also keep old favorites on the menu, though some may not be brewed as often. “Every beer has somebody that will be completely heartbroken if we take it away,” he says. That goes doubly for Red Rock’s barrel-aged beers. You may have noticed yearly releases like Paardebloem and Rêve have been absent in 2019. This is partially due to the transition between brewers as well as dwindling storage space for barrels. A new warehouse was built to solve the issue and the barrel program will be up and running again very soon. You’ll be happy to know there is currently Paardebloem in barrels on schedule to be ready in spring 2020. Look for new barrel-aged beers to join the ranks as well. It might be a while before we see Secale, Rêve, or Furlong, but they will be back. When they are, it’ll be like a reunion with old friends.

It’s good to see Kevin Davis continuing the legacy of Red Rock beer. He understands that quality takes time. “That was the one thing Kevin Templin told me, ‘Don’t rush anything. You don’t need to rush anything to get it out the door. Do it right,’” Davis tells me. “That’s the way he’s always done it and that’s the way I’ll do it.” Red Rock never spares an expense when it comes to ingredients used in the brewery or the kitchen. They don’t cut corners, and they aren’t a profit machine. Instead, they find themselves in service to the community that has supported them for the past 25 years. Thanks, Red Rock. Happy Anniversary!