Yes, I still have more to say about my recent road trip to the Midwest. If you missed out on the first two parts, then you’re shit outta luck.

Now, where were we? It wasn’t so much the “where”, but the “when” that I quickly lost track of. None of my experiences were split up by the banality of a work week, or any such regularity dictating what day it was. We drank when we wanted to drink, ate when we wanted to eat, and slept when we wanted to sleep. A funny thing happens to time on vacation when indulgence is the priority – it bends. And I could never tell nor care which way it went. In my vacation state of mind, everything was only relevant to “now”.

We rolled into Chippewa Falls on some unimportant day of the week just as the humidity of the late morning was starting to hang on our clothes. While waiting for the Leinie Lodge to open, we mosied around the town, stopping at an old convenience store on the main drag. I walked the pup on the shady side of the block while Julie and Michael went in for some nostalgic pepperoni sticks. I was unable to avoid the people cooing and asking to pet the baby (I can’t blame them!), but soon had my turn at walking through the shop. What I hadn’t expected was to find some nostalgia from my own childhood. The sweets section was full of all the sugar loaded goodies six-year-old me begged my parents to buy from what we called “The Corner Store” in Pennsylvania. I walked out that day with cow tails and candy cigarettes – exactly what I would have gotten 25 years ago. Like I said, time bends.

The Leinie Lodge was part museum, part gift shop, and part tasting room. I gandered, shopped, and sipped to my heart’s content. Many think of shandys and fruit forward/sweet beer when Leinenkugels comes to mind. Truth is, their lagers and other traditional styles have much more merit than their popularity affords. Balance and an easy-drinkin’ nature was the overarching theme. They upped the ante with their blending menu, featuring a full list of different beers mixed with one another to create concoctions like the Black Bear, which was their Creamy Dark with a splash of Berry Weiss. Ditch your negative connotations about “big beer”, and visit the Leinie Lodge! 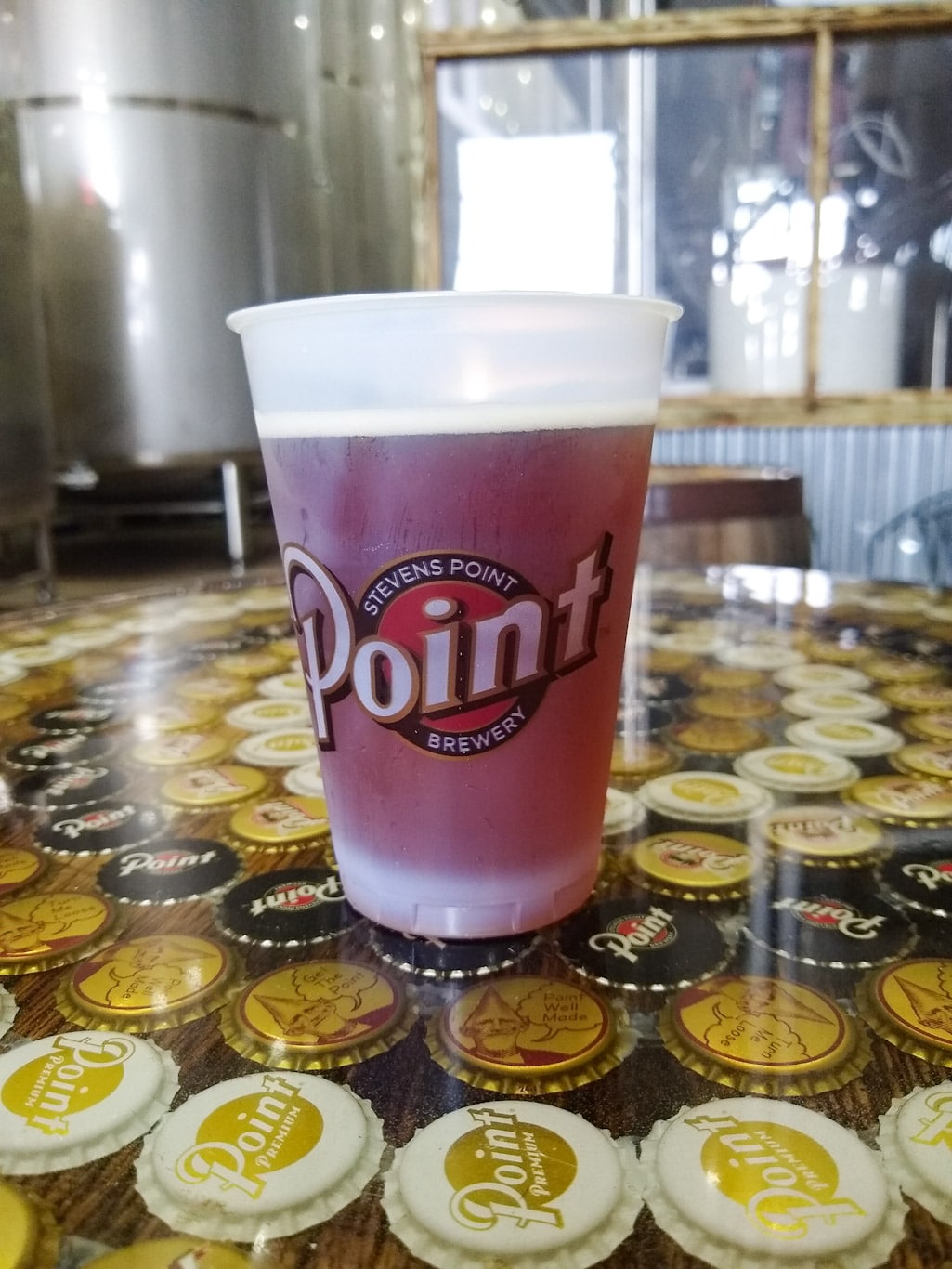 Point Brewery was the old school brewery I never knew I wanted to visit. I marveled at the use of equipment that was likely older than I was. There it stood, a bit unpretty, but immensely practical and operational. It reminded me of some of the breweries I visited in Bavaria. When a manual relic of beer equipment produces a balanced, delicate light lager, it amplifies the tact of the brewer. Knowing how to handle the equipment is a huge part of the job. If you can imagine a group of elderly folk that only like to cooperate with certain people and sometimes just don’t want to participate, then you can imagine working with old brew equipment. Consistency is a product of patience, understanding, and perseverance. I’m sure the Point Brewery surviving 162 years of production was thanks to those three qualities.

The historic nature of the facility echoed with my visit to Yuengling Brewery in Pennsylvania many years ago. It was no surprise to later discover Point Brewing is among the top ten oldest operating breweries in the US along with Yuengling. There’s a certain attitude in the air around American breweries that have survived the Prohibition. It’s as if they’ve braved the worst operational environment imaginable, and the fact their brand still draws breath makes them just as much an American icon as bald eagles and hot dogs. I wonder if pulling through such an intense struggle (like the World Wars) is how German breweries also gained their sense of self-importance. Regardless, it’s well deserved and highly respected. 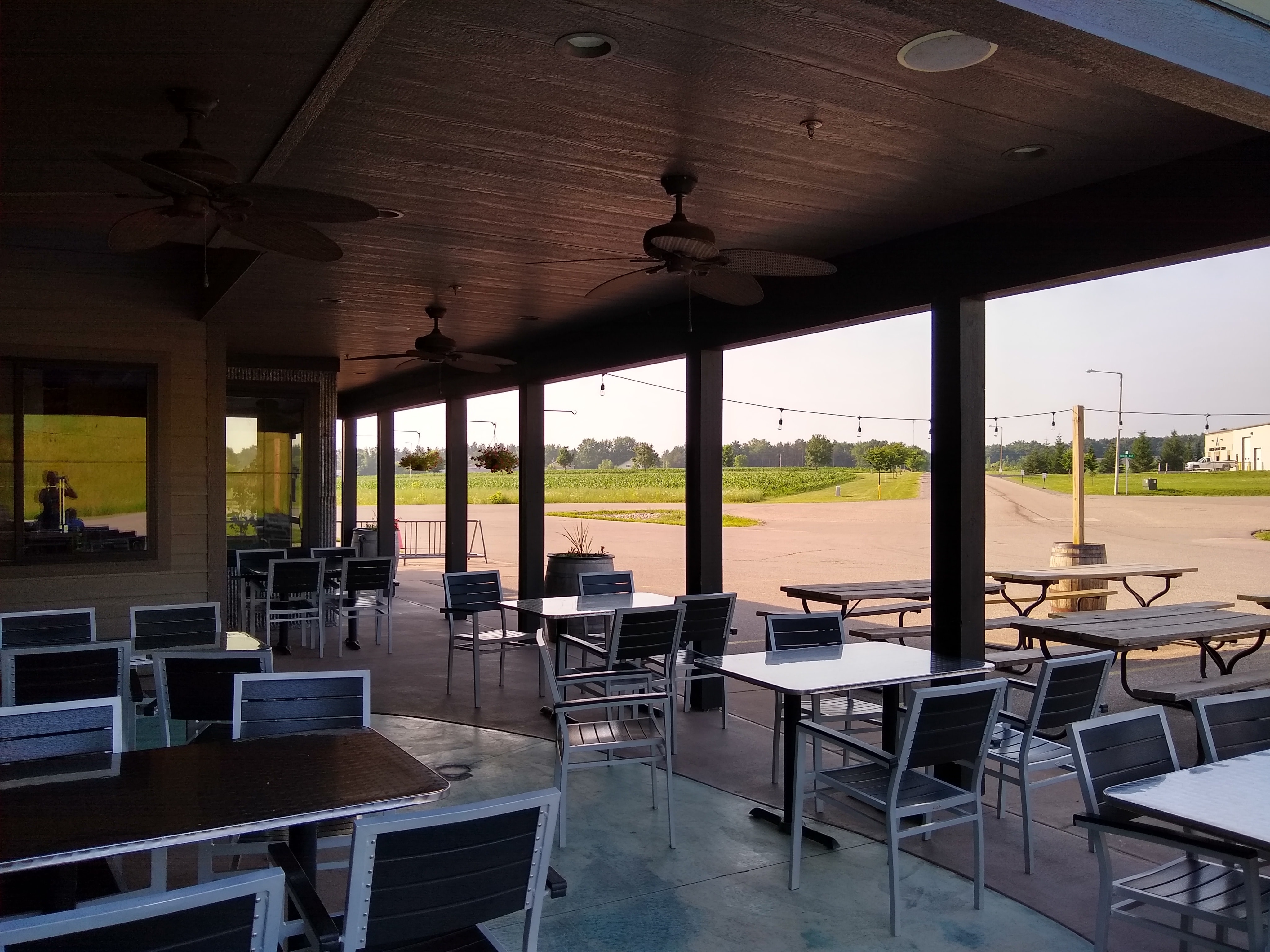 Central Waters was easily one of the more remote brewery locations we visited on our trip. We arrived uncomfortably close to closing time, but the beer server took special care of us even though we were her last customers of the day. We hurried outside to the patio and began picking our favorites from the flights. Though we chose most of the barrel aged beers for Michael, I found myself stealing more sips than I intended. It didn’t matter that the outdoor temperatures made crackly whispers of pilsner and light beer. When a beer tastes good, you should drink it. And down went the barrel aged beer. It’s as simple as that.

At some point, our hurried behavior was pacified by the lull of a passing train and a humble sunset resting over the fields. Our server drove off, followed by everyone but the brewer who was clearly mid-brew. We sat quietly, taking in all the comforts of a gentle evening, only breaking silence to laugh at the puppy or each other. Mind you, we’d only been there for about 30 minutes of what I guessed might have been a Monday or Tuesday night. I was so relaxed I’d even let the mosquitos nibble for a few moments before slapping them away. Time was merely a passenger – an order of priority I’d like to adopt more often.

And that’s all I have to say about that. There was so much more to the trip, but it’s the end of the snippets I’d like to piece together in the form of a three part post. But did you really think I’d fail to include New Glarus? You just hold tight now… ya hear?