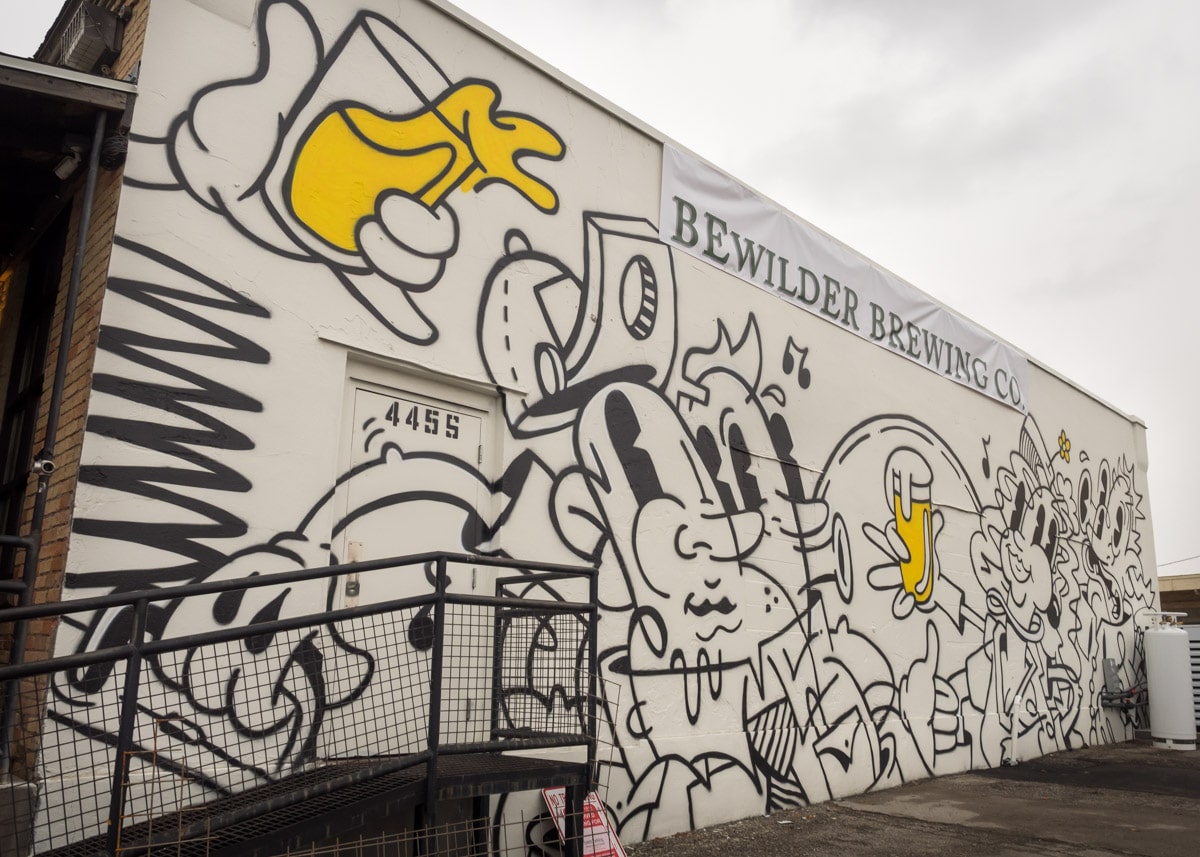 Bewilder Brewing is one of Salt Lake’s newest breweries, but owners Ross Metzger and Cody McKendrick have been part of the brewing community for years. The childhood friends opened Salt City Brew Supply in 2011 to serve local homebrewers, and they have played a big role in cultivating Utah’s brewing culture ever since. Opening their own brewery was the next logical step in their partnership, but it hasn’t been easy. They have had to overcome obstacles at every turn, including a global pandemic that forced them to close their doors just three months after opening. But they take each challenge in stride, learning to adapt along the way.

Running a successful homebrew supply chain, with a second location (Ogden City Brew Supply) in Ogden, has been quite the training ground for running a brewery. Cody and Ross have developed skills that go beyond running a business and brewing beer, and they haven’t stopped acquiring knowledge. “When we opened Salt City Brew Supply, we were still learning what we don’t know. I mean we’re still learning that today,” says Ross. Expanding their education included participating in the BCJP (Beer Judge Certification Program) and hosting the tasting exams required for certification. They also offer Homebrew 101 class and Intro to All-Grain classes for those ready to get into homebrewing or take it to the next level. 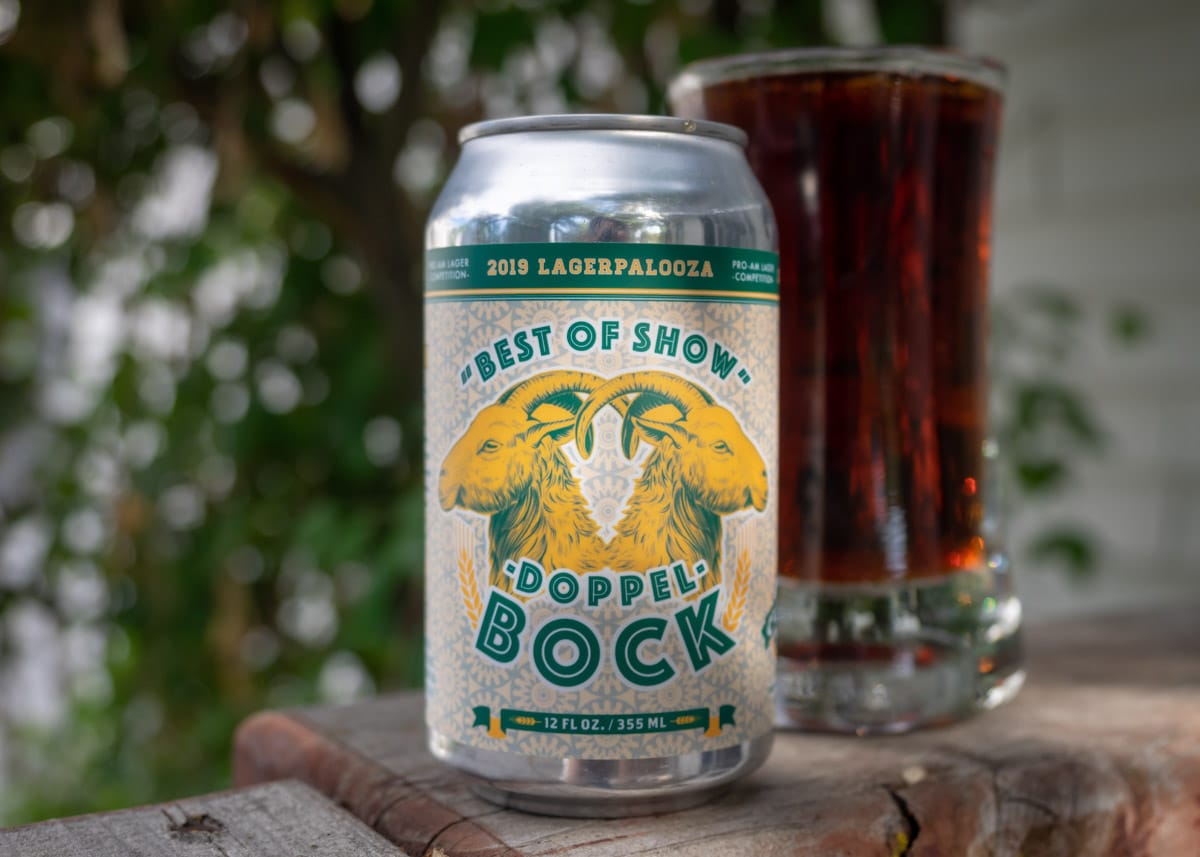 Their contributions to homebrewing don’t end there. To provide an avenue for brewers seeking feedback vital to brewing better beer, Salt City Brew Supply organized Lagerpalooza, a lager only homebrew competition hosted by Bohemian Brewery. Each year, the previous year’s “Best in Show” winner has the opportunity to brew their recipe on the commercial system at Bohemian Brewery. The Pro-Am brew is canned and released to coincide with the Lagerpalooza competition scheduled for National Homebrew Day. It is also eligible to be entered in national Pro-Am beer competitions. Salt City Brew Supply, and now Bewilder Brewing, are great friends to local homebrewing clubs like the Hop Bombshells and Lauter Day Brewers, offering meeting space, discounts on supplies, and soon the chance to brew on their commercial system. The new brewery has become a space for hosting classes, off-flavor tests, and the latest homebrew competition, Utah Brew Fest.

When Bewilder Brewing opened in mid-December, they were not yet legally allowed to brew on their system. Their manufacturing license was set to kick in on January 1st. The delay was one of many setbacks the business owners faced as they worked to open on a limited budget, but luckily Ross and Cody have made many friends in the brewing industry over the years. Local breweries, 2 Row Brewing, Bohemian Brewery, Strap Tank Brewing, Toasted Barrel Brewery, Wasatch Brewery and Kiitos Brewing, invited the pair to brew collaboration beers on their systems to fill their taps for opening day. The assortment of brews made for one of the most unique openings I have ever attended. You could sense the cooperation and support Utah’s brewing community has for one another. 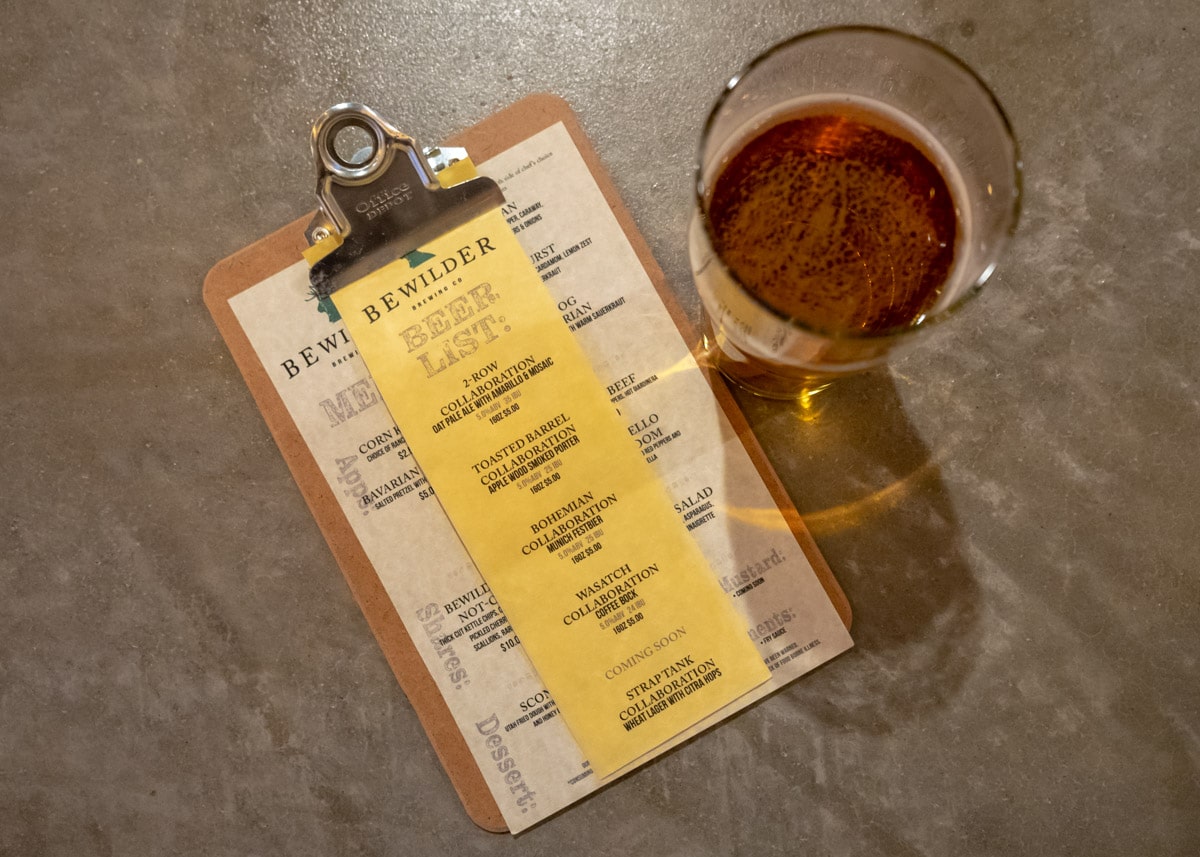 As they develop their own repertoire, Bewilder hopes to focus on German lagers and English pub-style beers. First up on the new system was an ESB (extra special bitter), a style not currently trending, but appreciated by beer nerds, and great for educating others on traditional beer styles. However, with business being affected by the coronavirus pandemic, the concentration has been on brewing what is likely to sell. “We haven’t really been able to flex our muscles on the German lagers and English-style pub beers like we want to,” Cody explains. “We need to get beers out that people will make a trip to us to drink.”

Coming up with new beers to brew should not be a problem for Bewilder. “The last nine years of having a homebrew shop has been research and development for recipes for the brewery essentially. So, we have no shortage of recipes to pull from,” Ross tells me. He pitches in on the cellar side of things while Cody does most of the brewing. “He sort of has a knack for coming up with recipes on the fly,” says Ross. The skill comes in handy for a brewery that has had a rather rocky start.

Bewilder’s original business plan was to sell pints over the bar and did not call for much packaging. With the forced shut-down during the COVID-19 crisis, plans have changed, and timelines have been moved up. They purchased a crowler machine and are looking into getting a canning line. They have also applied for a packaging license to allow for coolers up front stocked with to-go beer for sale. “We’re changing our model a little bit to meet the needs of what’s going on right now,” says Ross.

That includes embracing takeout food. There were originally no plans to offer carry-out, but the amazing food of Bewilder’s head chef, Justin Field, can now be enjoyed at home. The small kitchen specializes in handmade sausages, inspired by countries around the world, crafted with locally sourced ingredients. The pub plans to introduce new rotating sausages, paired with pickled items from the region, that coincide with beers being released. Customers can also pre-order and buy the sausages raw and ready for grilling at home, another plan accelerated by the present times. Bewilder also serves vegetarian options like their meatless bratwurst and grilled portobello mushroom sandwich. 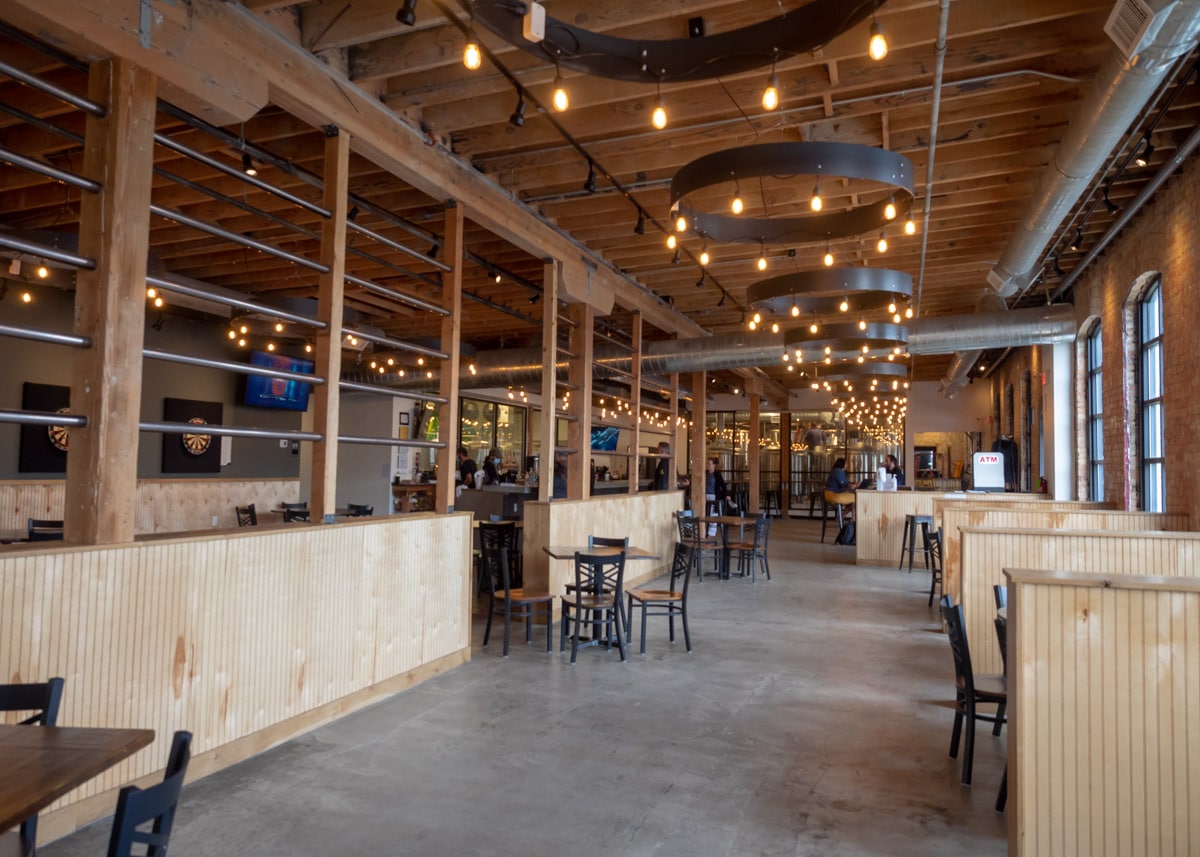 As Utah begins to loosen restrictions and allow businesses to reopen, Bewilder was one of the first breweries to allow customers to return for dine-in. Their spacious location in a historic downtown building, formerly Club X, lends itself well to social distance dining. The newly opened patio offers plenty of fresh air with hanging plants for ambiance. The brewery is working on filling their taps with a variety of beers and hopes to lure people back with their new Sunday brunch menu and weekday lunch specials. You will also start seeing Bewilder beer on tap at beer bars and restaurants like Lucky 13 and Slackwater.

Although new to the scene, Bewilder Brewing already plays an important role in Utah’s brewing community that goes beyond making and selling beer. Their roots in homebrewing drive an ambition to promote education and a thriving beer culture within the state. Help them continue in their quest by supporting them through the tough times. Stop by Bewilder for a sausage and a pint or beer and food to-go!