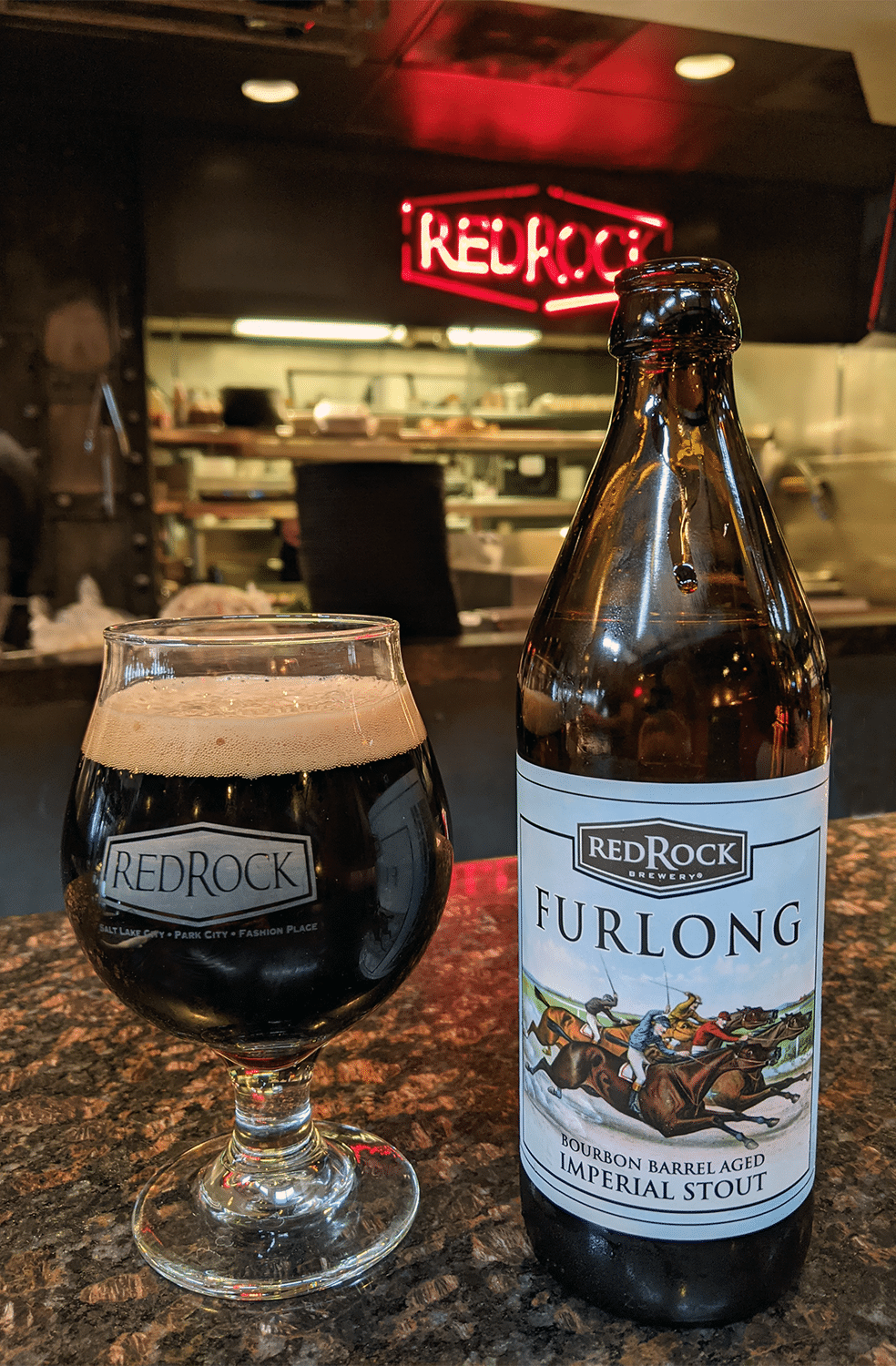 What is the beer style that started it all – your love of beer? When I hear that question, many of my favorite beer styles float through my mind. There are sours, porters, gose, stouts, Berliner weisse, Belgian-style tripels, the list could go on and on. But at the top of my list are stouts, and when I think of the stout that started it all for me, I think of Furlong. To start off my journey as a Crafty Beer Girl, I decided to pay homage to one of my most influential beers, Red Rock Brewing’s Furlong Bourbon Barrel Aged Imperial Stout.

For those of you who have never had Furlong, I will be the first to tell you it is a game changing stout. Whether you are a stout fanatic or you wouldn’t touch one with a ten foot pole, this beer is a must try. Furlong, meaning an eighth of a mile, is a bourbon barrel-aged imperial stout that Red Rock Brewing has been releasing annually since 2015. I first tried it in 2019 when I was not a stout fan. Like many typical stout novices, I found them intimidating. They were often too bitter, tasted overly burnt, and were very alcohol forward, making stouts one of the last on my ordering list in a pub. When I first tried Furlong at the recommendation of a trusted beer enthusiast, I recall that my immediate impression was what a surprisingly approachable stout it was!

Furlong has distinct vanilla, oak, bourbon, and roasted flavors. Unlike many barrel-aged stouts, the bourbon does not come at you with a shot-burning, straight-up alcoholic flavor. Instead, Furlong presents the bourbon as a forward characteristic with a silky smooth finish. While there are notes of roasted barley, this doesn’t give the beer an overly bitter taste, but instead adds to its complexity when combined with the vanilla and oak. Furlong’s full-body, rich flavors, enticing aromas, and smooth finish acted as my bridge to appreciating the sensory characteristics of stouts and turned me into a full-blown stout fanatic.

I recently sat down with Red Rock Brewing’s head brewer, Kevin Davis to learn more about Furlong. “Historically [Furlong] is a Russian Imperial Stout” and the base of Furlong is the “Drioma Russian Imperial stout”, Davis tells me. Having drunk both Furlong and Drioma in the past, this surprised me, as they are two very distinct beers. He tells me that unlike Drioma, Furlong is “aged for 1 year” in oak bourbon whiskey “first-fill” barrels which impart distinct characteristics. “Every barrel is tasted individually”, Davis says. This ensures the quality of the beer before the barrels are blended and bottled. To truly appreciate the effect of barrel-aging, he suggested that we do a side-by-side comparison which I enthusiastically agreed to. 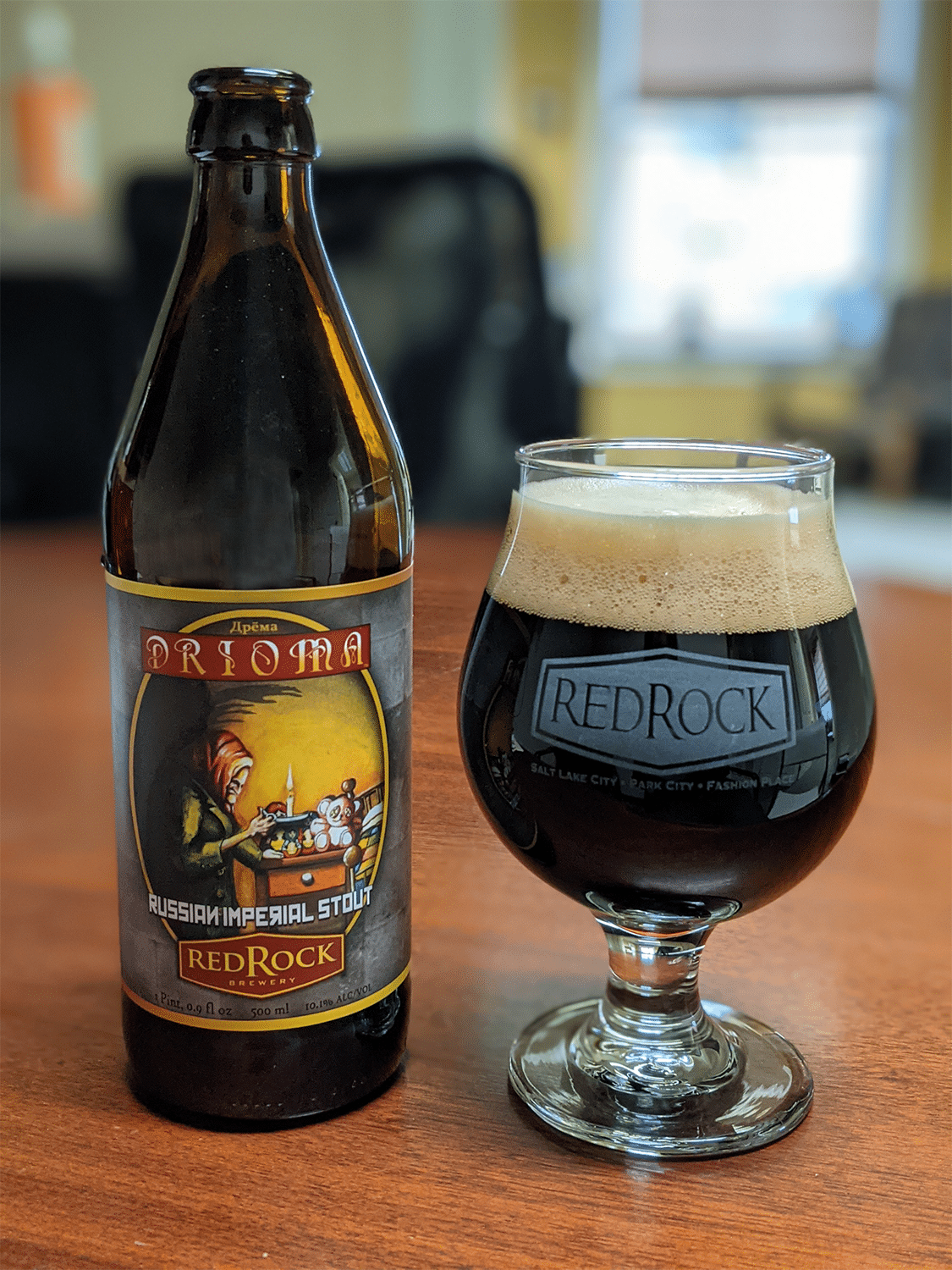 We begin with the Drioma Russian Imperial Stout. It pours dark and opaque with a moderate amount of light brown foam and notable aromas of coffee and chocolate. When tasting Drioma, I immediately pick up chocolate and burnt-malt flavors along with a moderate sweetness which Davis points out are notes of marshmallow. We then turn to Drioma’s barrel-aged counterpart. Furlong Bourbon Barrel Aged Imperial Stout pours a rich dark color similar to its Drioma base. However, unlike Drioma, Furlong’s aroma and flavor consist of a delicate balance of vanilla, oak, bourbon, and roasted notes. “Why are the flavors so different”, I ask, “since the base of the Furlong is Drioma?”. The answer is in simple: barrel-aging.

Throughout the year-long barrel-aging process, the oak bourbon barrel continually expands and condenses. As the wood expands, it absorbs the beer, exposing it to lactones derived from lipids in the oak. This infuses the stout with  a vanilla and oak flavor. As the oak contracts, the beer is pushed back out of the wood infused with the bourbon previously absorbed during the barrel’s past-life. Additionally, as the barrel breathes, it allows small amounts of oxygen in through the wood. While high levels of oxidation can create a highly undesirable stale, cardboard, or papery characteristic in beer, slight exposure through barrel-aging provides a dried fruit and raisin flavor that enhances the stout.

Although Drioma is the base for Furlong, they are two very distinct beers with their own unique properties. Barrel-aging drastically changes the complexity of Furlong by imparting a balance of vanilla, oak, and bourbon sensory characteristics making it a delicious yet approachable beer. The next time you find yourself at a Red Rock Brewery location, or if you happen to have Drioma and Furlong in your cellar, try a side-by-side tasting to experience the effect of barrel-aging firsthand. Davis recommends pairing with Red Rock’s Chocolate Stout Brownie. Furlong with a salted caramel, bourbon cream sauce, delectably delicious chocolate brownie?! Yes please! If you’re looking for a bridge into the world of stouts, let Furlong take you that first eighth of a mile, or have a stout-loving friend help you find your own bridge beer. As for my fellow stout fans, if you attempt to go a mile, Furlong style – pace yourself and get a ride home.