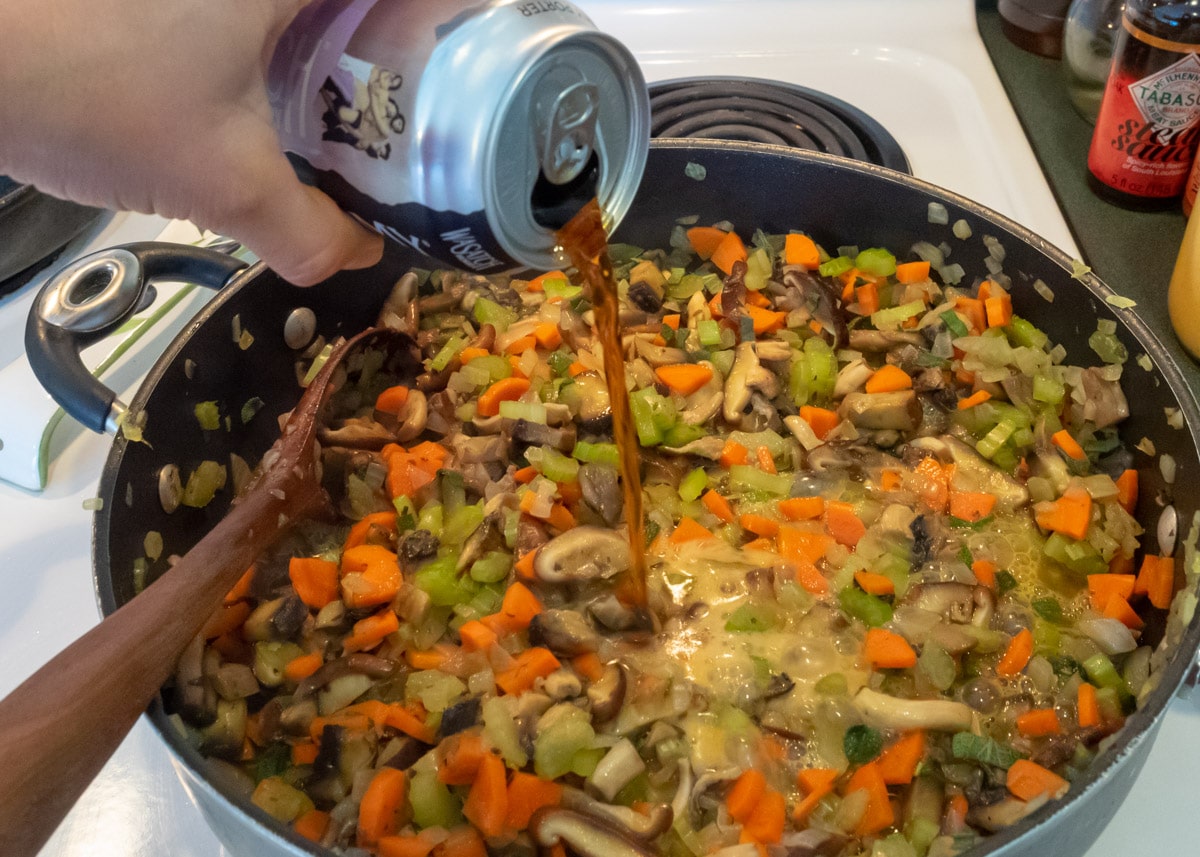 When it comes to fancy cookin’ in my house, it’s my husband John who likes to whip things up from scratch. But I do like to try my hand at a recipe here and there, particularly where there’s beer involved. The holidays are a great time to fire up the oven for traditional favorites to complement a family meal. In my copy of The American Craft Beer Cookbook by John Holl, I found this simple recipe for Wild Mushroom and Porter Stuffing. Since stuffing is John’s favorite part of Thanksgiving dinner, I thought it would be the perfect contribution for my family gathering this year. Leftovers welcome! 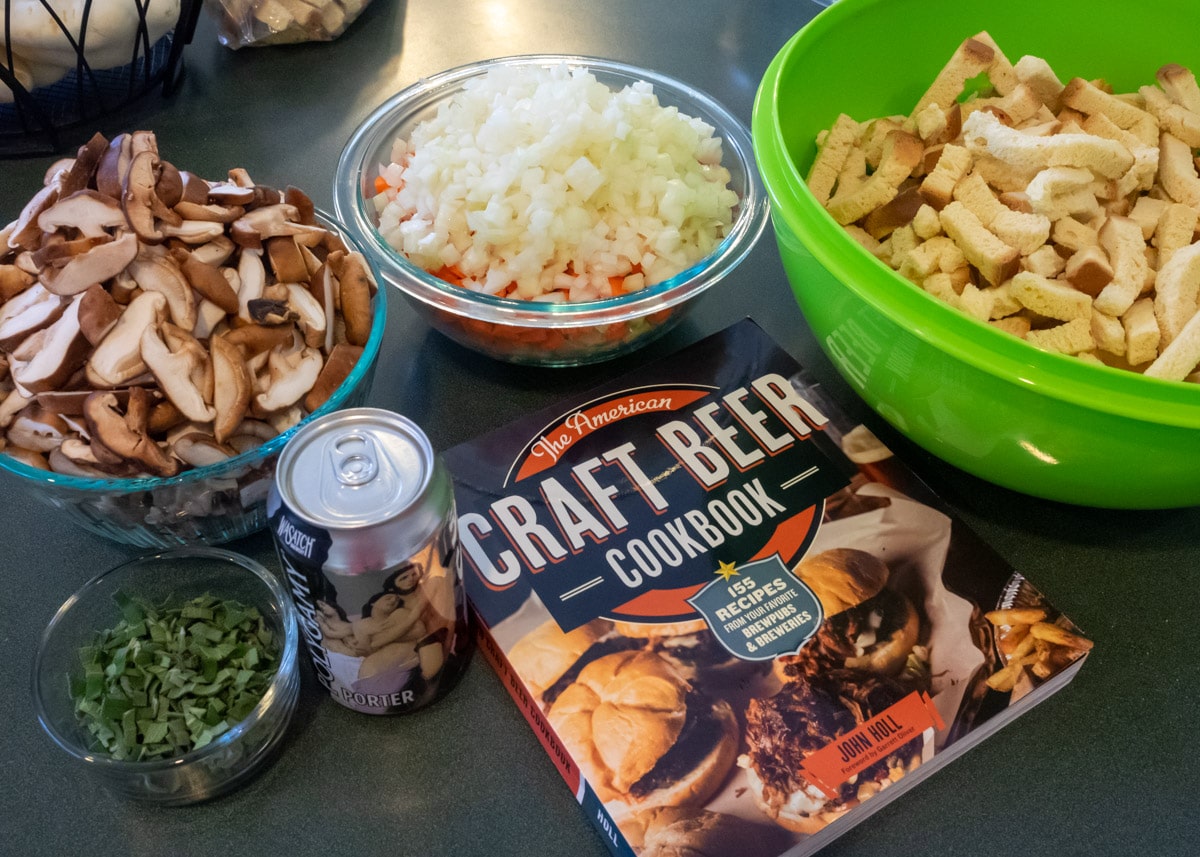 The American Craft Beer Cookbook is a collection of recipes from breweries and brewpubs in all corners of the country. Not all the recipes contain beer as an ingredient, but they are all made to pair with a pub favorite. This recipe hails from Great Lakes Brewing Company in Cleveland, Ohio where they make the Edmund Fitzgerald Porter. The robust maltiness of the porter adds a richness to the inherent bready nature of the stuffing. I used a local stand-in, Wasatch Brewery’s Polygamy Porter, for my batch. 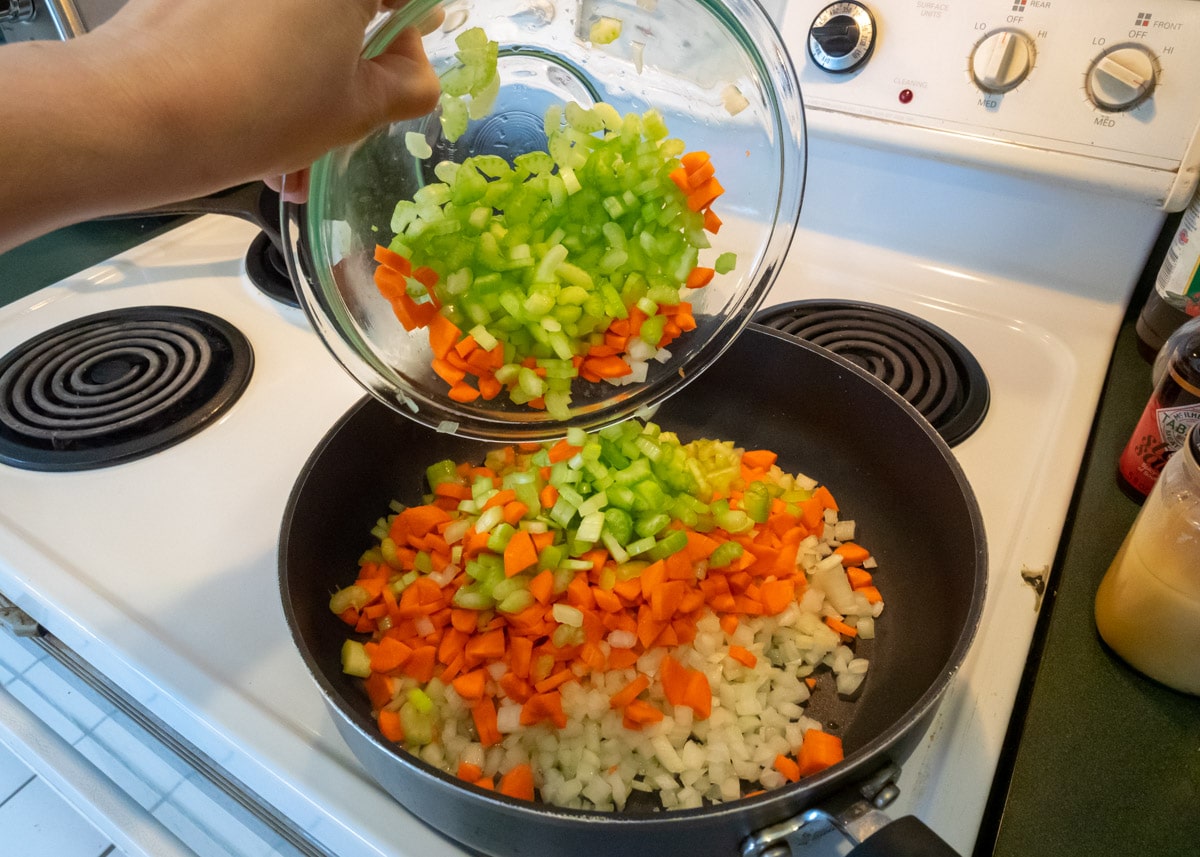 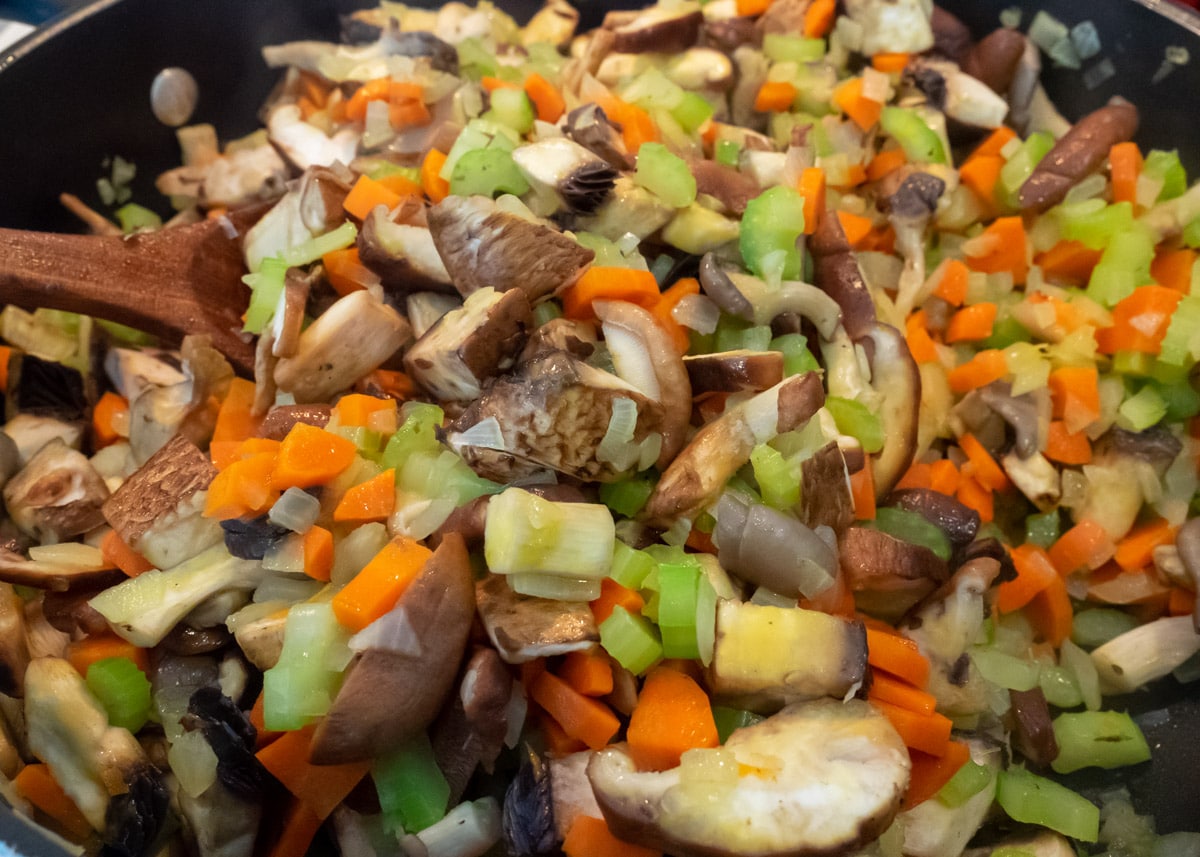 Heat a skillet with the olive oil over medium-high heat. Add the onion, celery, and carrots and sauté 4-6 minutes until tender.
Add the mushrooms and cook another 5 minutes before adding the sage and the porter. Cook about 10-15 minutes, stirring occasionally, until the porter reduces by half. 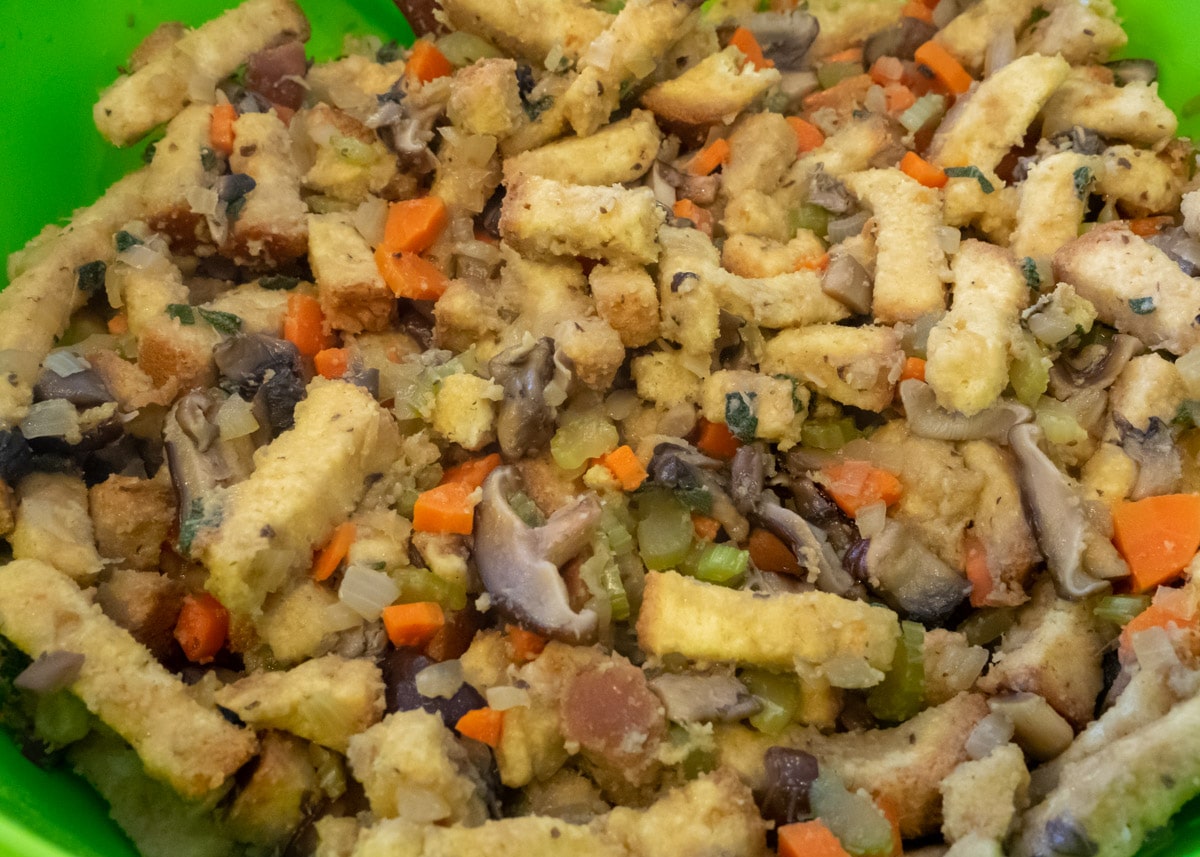 In a large bowl, combine the mushroom mix with the bread. Stir until the mushrooms and veggies are evenly dispersed throughout the bread. Let it cool to room temperature before mixing in the eggs. 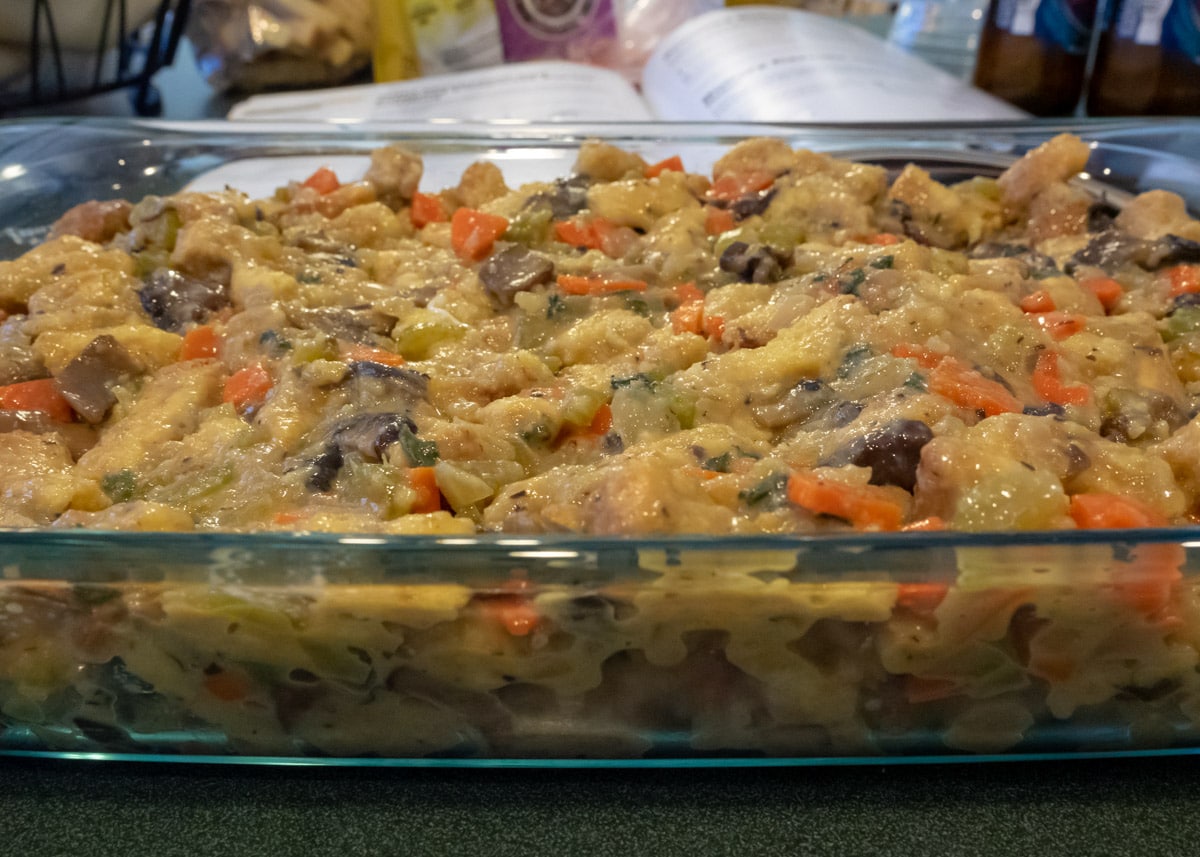 Fill a 13-inch baking dish with the stuffing (or stuff it into a turkey) and bake for 25-30 minutes until the top is a crusty golden brown.
Let the dish cool somewhat before serving. 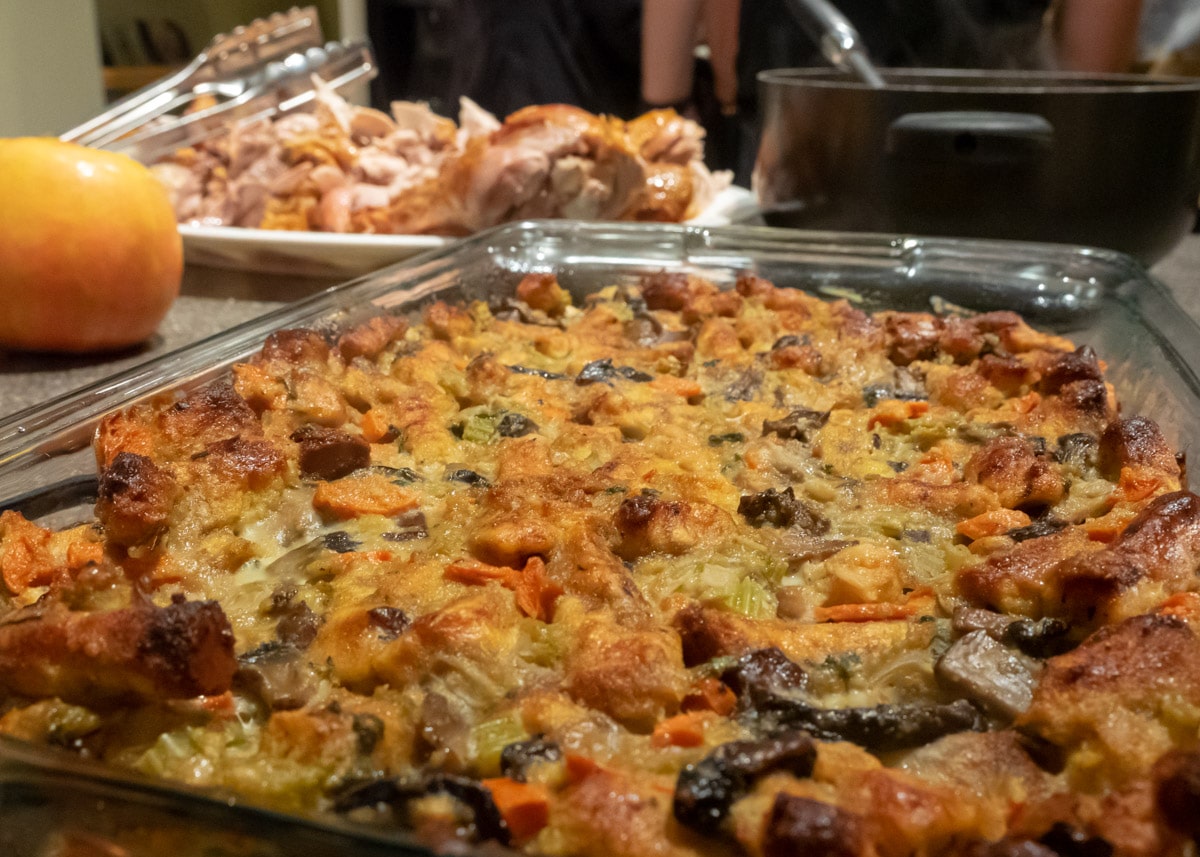 As I was making this stuffing, I couldn’t help but notice that it doesn’t include salt. That’s a good thing for those who wish to cut back on their sodium intake, but you may want to add a little if you prefer a bit more flavor. Although, if you plan to smother it in gravy, you won’t need it. The eggs give it the consistency of bread pudding (vegetarians can substitute the eggs for tofu).

This is a very hearty stuffing; unlike any I’ve had in the past. With the mushrooms adding an almost “meaty” texture, you could really eat this alone as a main dish. In fact, John and I ate the leftovers for lunch, no turkey needed. But it’s best served as an accessory to your favorite roast bird with all the trimmings, topped with holiday cheer!