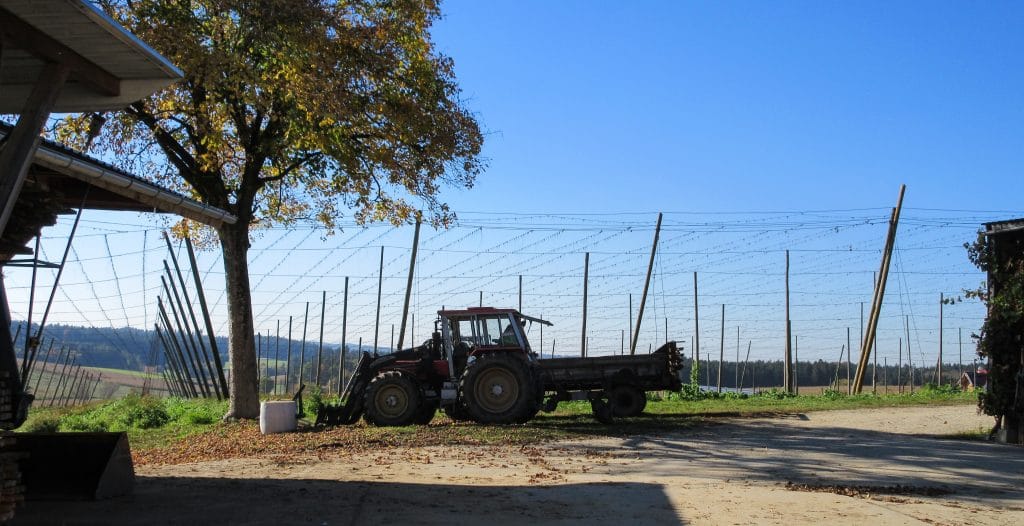 The sun was high above as we exited the coach and our feet found the gravel driveway of a historic hop farm in the Hallertau region of Germany. The warm greeting received from our hosts, the Stanglmair family, was rivaled only by the balm of a cloudless afternoon. My skin hardly had a minute’s time to drink up the rays before beer found my lips. Any suddenly, the world was perfect. 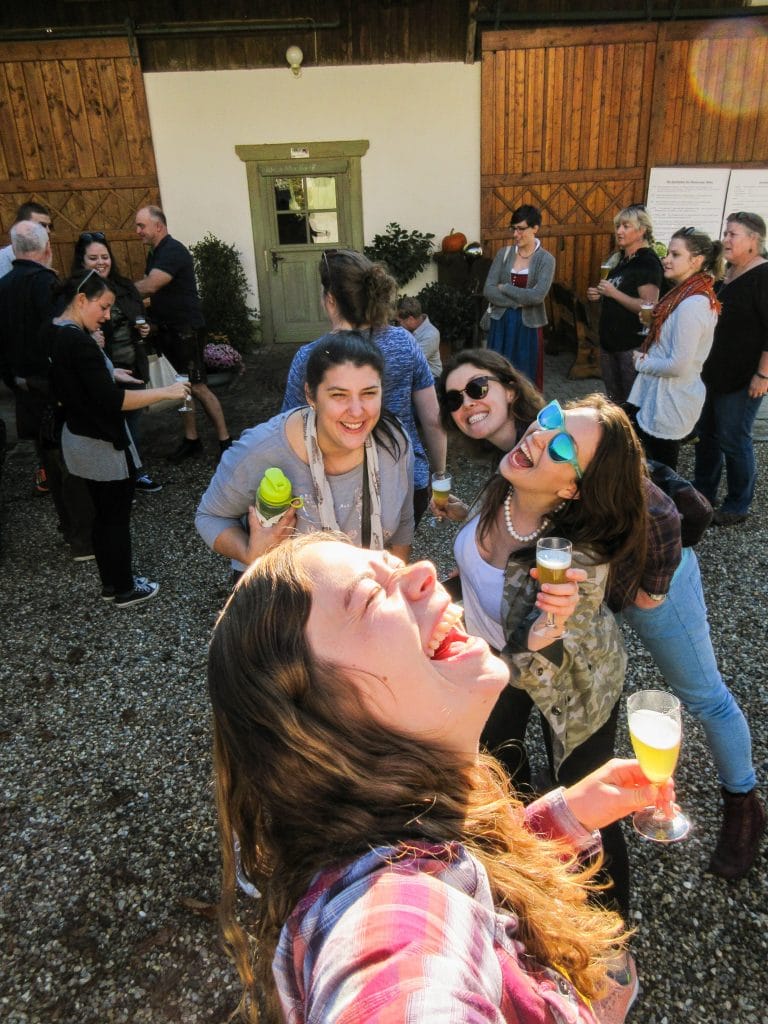 The tiny town of Reichertshausen is home to a farm that has seen 21 generations of hop growers. Stefan Stanglmair and his family invited us to join them for a taste and tour of their farm, where their roots grow deeper than the hops themselves. Cats and peacocks murmured and eyed us curiously as we gaped and roamed. Some of us engaged in discussion, but most had eyes too busy swallowing scenery for words to find their tongues. 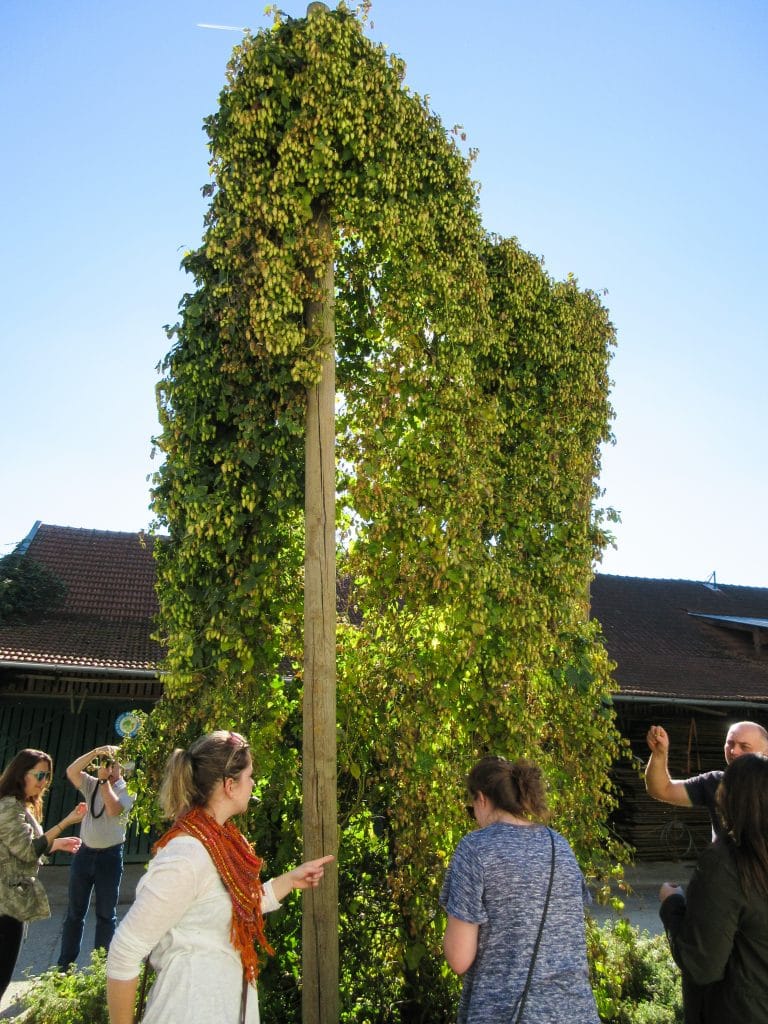 We first stopped at an ornamental hop garden located in what literally seemed to be the middle of the road. We pulled and plucked at the bines, which had already garnished tinges of rusty brown from basking just a few weeks too long in the sun. The harvest had already come and gone, and these were some of the only semi-healthy looking hops left to ogle. Among the bines tangled between three tall posts was a new variety called Ariana. A firm rub of the hop cones elicited soft aromas of creamsicle and vanilla. My hands were coated with sticky lupulin, and I dreaded wiping it off. 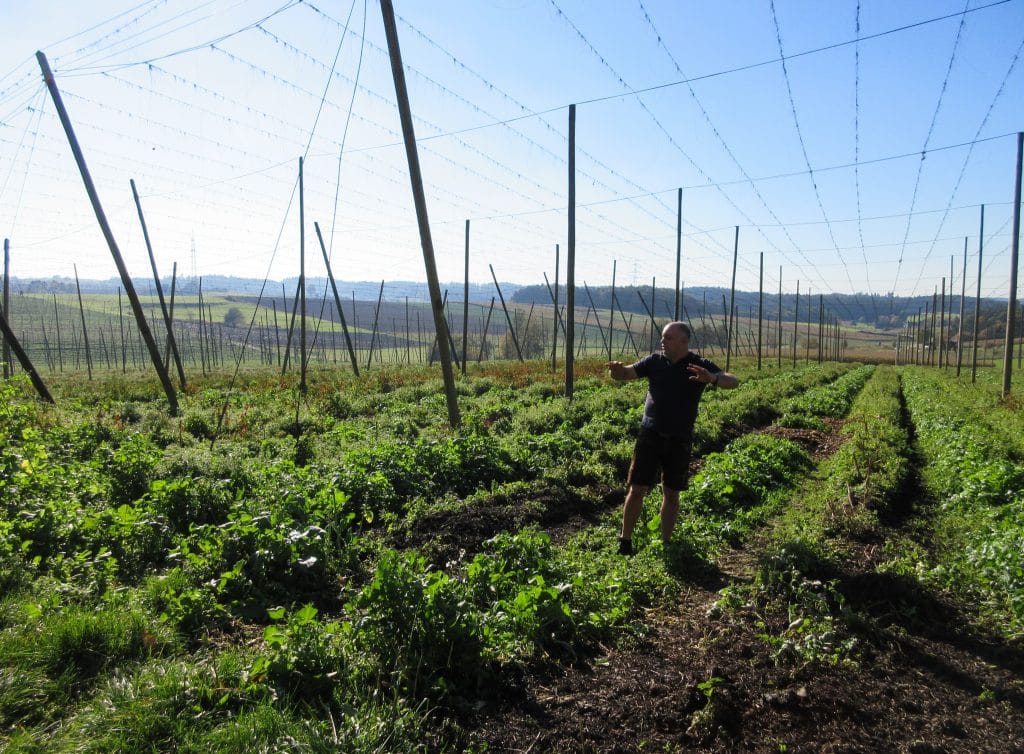 Everything about this place represented natural process and beauty. Stefan stood in the hop field where wooden poles and wire held an invisible roof above his head. Even after the hops had been removed, the field looked ripe and lush. The farm uses green fertilization – green matter planted between rows of hops – to keep the soil healthy and winterized for the cold season ahead. The stubs of dead hop bines poked through the soil like spines on the back of an ancient beast. The sight was humbling, invigorating, and pacifying all at once.

During the summer months, young bines are trained around doubled up wires extending from the base of the bine to a sturdy wire frame running the length of the field. These sun-hungry plants will grow to a height of 21 feet in only 6-7 weeks! Subsurface drip irrigation feeds the bines a steady diet of water fortified with nitrogen and magnesium to supplement the sunshine. Healthy plants will produce desirable yields after maturity for upwards of 20 years, though the oldest living hop bines in the Hallertau region are about 100 years old. 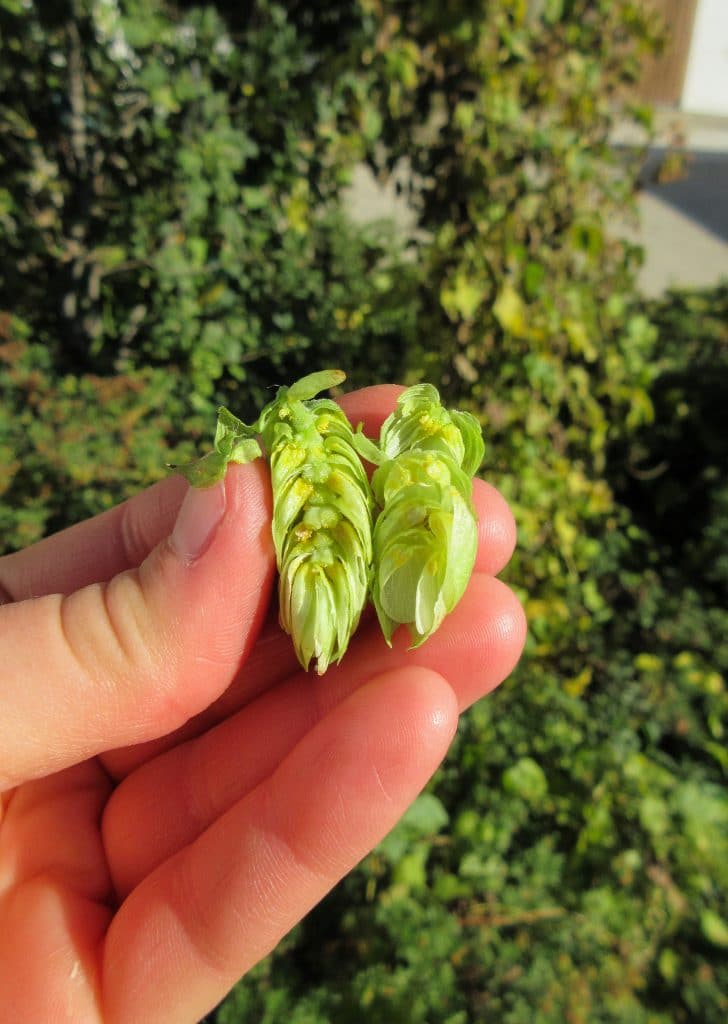 The days leading up to the harvest involve manually squeezing, rubbing, and pulling at the hop cones, not unlike what we were doing that afternoon. When the hops are ready for harvest, they will sound like paper when you roll them between your fingers. The word Stefan used was “crispy”. Another test involves pulling on the bottom of the cone while it’s on the bine. If the cone breaks in the middle, it’s not ready. But if it breaks off the bine from the top, then it’s go time! Whole bines are pulled from the field and fed into a machine that separates the hops from the bine via a series of metal picking fingers and drums. The leftover bines and wires on which they grew are chopped up and tilled back into the soil. It was noted that 1 machine can do the work of 400 hand pickers. Wow!

Next, we climbed the stairs of the barn where the fresh hops were kilned, conditioned, and baled. Each step on the staircase creaked, announcing our ascension, and hop dust was stuck in every crack and crevice of wood. I could only imagine what the place looked and smelled like under a blanket of verdant hops. The kilning and conditioning process lowers the moisture content in the hops from 80% to about 10%, greatly reducing the chance of spontaneous combustion. When the moisture content reaches a stable, desired level, the hops are baled, and samples are sent out for brewers to test and purchase. 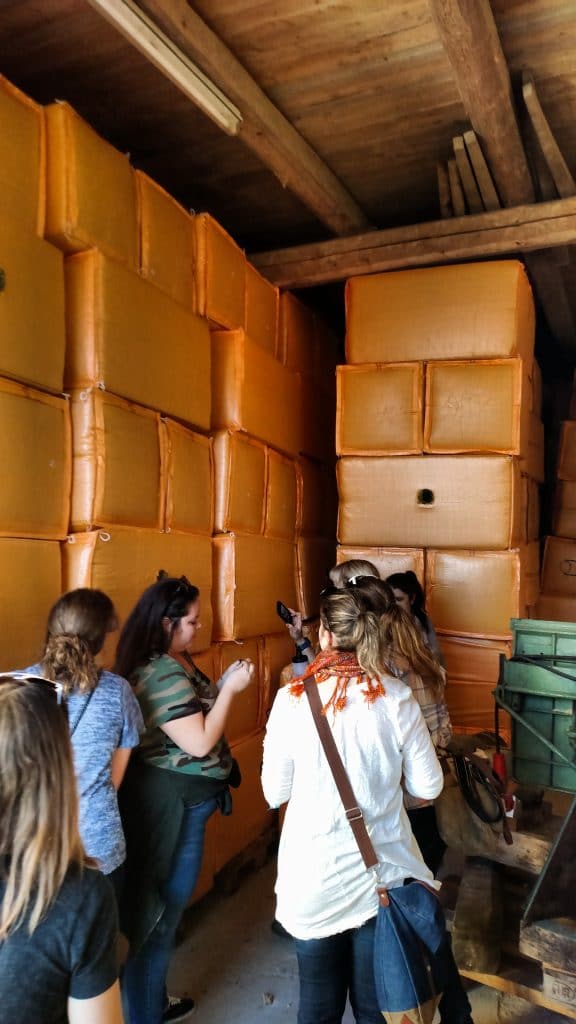 Stefan then lead us back outside and into a smaller building. Before being told where we were, my nose alerted me it was a magical place. Orange rectangles were stacked to the rafters with baseball-sized holes punched into them. Pungent aromas of grass, flowers, and subtle fruit saturated the air. These were bales of hops! We reached inside and pulled out some green gold to plunge our faces into. It was glorious. 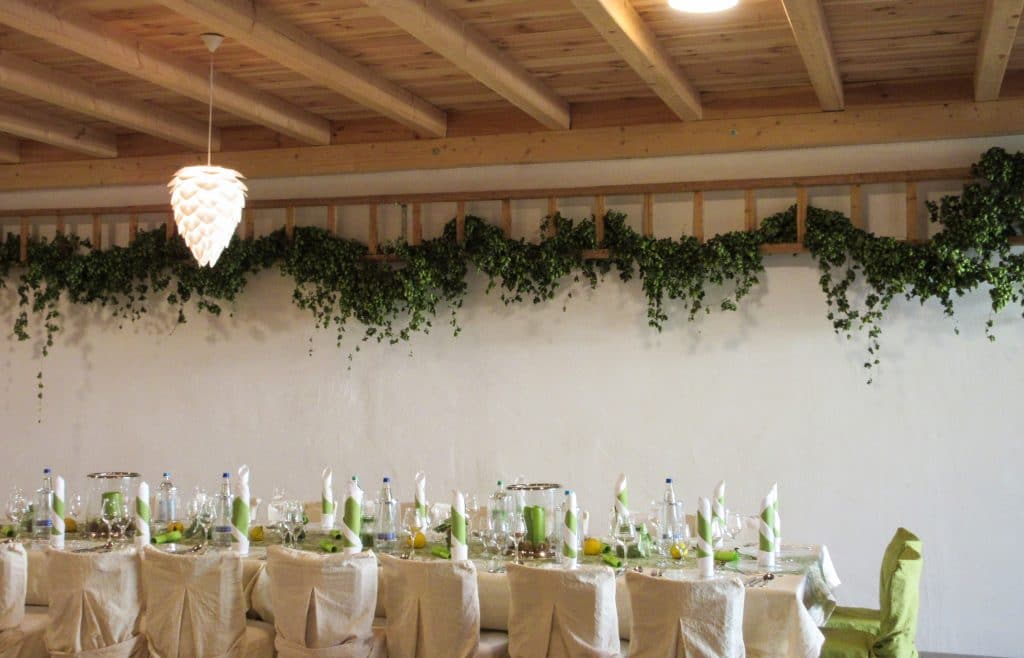 As if a private tour of a Hallertau hop farm wasn’t enough to drop our jaws, we were then invited to dine with the Stanglmair family and Jennifer Glanville of the Boston Beer Company, who played a huge part in planning the visit. The table setting and event space was handsomely elegant and decorated with hops in ways I could never conceive. Several delightful courses paired with local beer tickled our palates as we discussed German beer politics, the Reinheitsgebot, and how they compared to laws or ideals in other countries. As the evening was concluding, we were given Aventinus Eisbock in a thistle glass, and had one last wander around the farm.

The sun was setting over the fields, lending a glow of orange and magenta to a sky of pale blues and greys. Cat Wiest and I stretched out in the field, gazing up and through the wire skeleton above. A gentle fog was rolling in, and the earth smelled rich as tiny bugs buzzed by. I could have died a happy girl in that moment. But alas, there were more places to visit, more sights to see, and most importantly, more beer to drink. And that last one will always get me!

Many thanks to the Pink Boots Society, Treasures of Europe Tours, the Stanglmair Family, and Boston Beer Company for their support, hospitality, and dedication to education! Prost!