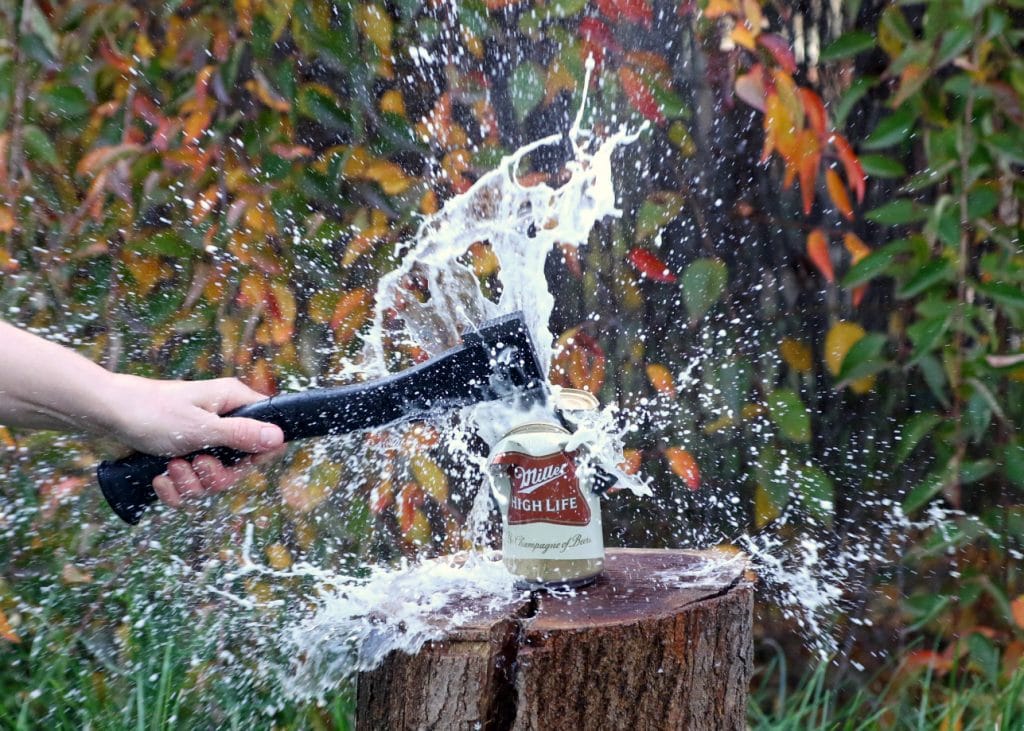 Imagine sitting at the bar enjoying a nice glass of your favorite beer or whiskey when, without warning, a half-crazed woman armed with a hatchet barges in and starts smashing everything! Talk about a buzzkill! I’m pretty sure I’d be carrying a weapon of my own to defend my right to drink. We take it for granted nowadays, but before Prohibition, that right was very much hanging in the balance. Dive owners had a particularly vexing pest who made their lives a living hell. Her name was Carrie Nation and she wrecked saloons.

During the mid-19th century, Americans began to think about ridding themselves of alcohol. Drinking was an important aspect of American life, particularly among immigrants and the working class. Unfortunately, the country did have a bit of an alcohol problem. There were many instances of men who became drunkards and neglected the needs of their families even becoming violent. The practice of drinking morning, noon, and night was fine when it was a moderate beverage like beer. But, as more grains were grown and distilled into stronger drinks, it was apparent that there was a limit to what was healthy to consume. A society of reformed drunkards, who called themselves Washingtonians, formed something like an early version of AA (Alcoholics Anonymous) and pledged to abstain from drink. But, the religiously devout considered drinking to be a sin and the reason for all failures. For them the only moral solution was to rid the world of the wickedness of alcohol.

The temperance movement began with women and children. They were the ones who were the most hurt by the alcoholic men in their lives. They took to the streets praying at the doorsteps of all purveyors of alcohol. As activists and crusaders against liquor, women were empowered in a way they never were at home. They believed that gaining the right to vote would be their weapon of protection against the evils of drink. Because of this, the temperance movement became inextricably linked to women’s suffrage. The Women’s Christian Temperance Union (WCTU) was formed in 1873 to pursue social reforms and rights for women. The WCTU successfully lobbied local governments to require anti-alcohol curriculum in schools. Despite their efforts, more saloons continued to open in America. They numbered about 300,000 by the turn of the century. 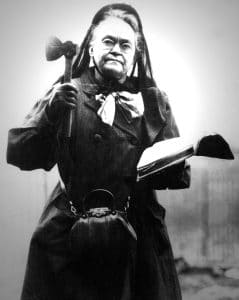 And this is where Carrie Nation enters the stage. Carrie had a life filled with heartbreak. Her mentally ill mother died in an insane asylum, her first husband drank himself to death, and she had a second marriage that ended in divorce. She resolved to give herself over to the struggle against what she referred to as “the place where the serpent drink crushed the hopes of my early years; the saloon.” Ms. Nation was frustrated by failed attempts at peaceful protest and unanswered letters to lawmakers. Her state of residence, Kansas, was already a prohibition state, but nobody paid much attention to the law. It was her belief that God wanted her to do more.

On June 6th, 1900, Carrie Nation threw herself down at the foot of her bed and prayed to the Lord asking him to use her in any way he saw fit to defeat the terrible scourge of liquor. In answer, she heard a voice speaking the words, “Go to Kiowa and I’ll stand by you.” The next morning, she went into Kiowa, Kansas bearing rocks and bottles wrapped up in paper to look like packages. She carried her parcels, which she called “smashers”, into Dobson’s Saloon and told the owner, “Get out of the way. I’m going to break up this den of vice!” After destroying 3 saloons there, she moved on to Wichita to destroy the bar in the Hotel Carey. She was arrested, but her time in the joint only served to embolden her in her cause. She said to her jailor, “You put me in here a cub, but I will go out a roaring lion, and I will make all Hell howl!” As soon as she was released, she attacked another saloon. But, this time she used the weapon that would make her iconic; a hatchet.

At almost 6 feet tall and 175 pounds, Carrie Nation was an intimidating figure. She continued her tour of Kansas, smashing saloons as she went. The WCTU refused to endorse her methods to which she responded, “I tell you ladies, you don’t know how much joy you will have until you begin to smash, smash, smash!” She was jailed and released over and over again. The governor begged her not to do more damage, but she righteously informed him that if he would not enforce the law, she would. Her antics made front page news and earned her a legion of followers who called themselves the Home Defender’s Army. In a month they ruined 100 saloons in 50 Kansas towns. State legislators rushed through a bill that would strengthen the enforcement of law in an attempt to pacify Nation and her followers. It was an astonishing victory.

Carrie hoped her movement would spread across the entire country. In the end, it died almost as quickly as it began, but she never stopped crusading. She published anti-alcohol literature and became a temperance lecturer, even appearing in vaudeville. Her notoriety also made her an object of ridicule, though bartenders always kept one eye open for Carrie and her hatchet. Carrie Nation may have brought great deal of attention to the movement, but it was steadier, more rational individuals who would follow through and eventually achieve the end goal – the folly of Prohibition. And we know how that turned out. Mark Twain said, “Nothing so needs reforming like other people’s habits. Fanatics will never learn that, though it be written in letters of gold across the sky. It’s the prohibition that makes anything precious.”

~Special thanks to my husband, John Shafer, for helping me out with the sweet hatchet photos. To see more of his work, visit Photo-John.net