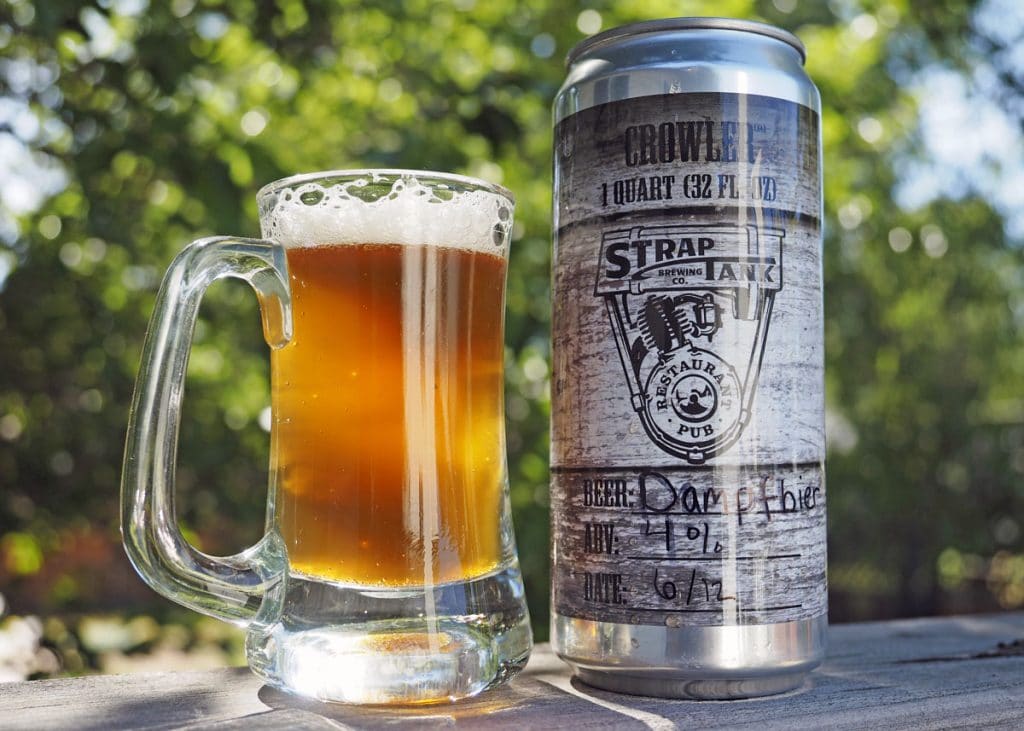 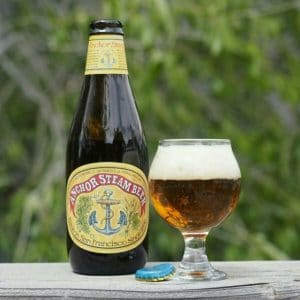 What the suds is Dampfbier?! Relax; it’s not as bizarre as it sounds. Dampfbier (damp-f-beer) translates literally to “steam beer” in German. Here in the American West, we are quite familiar, or at least our ancestors were, with steam beer. You may be acquainted with San Francisco’s Anchor Steam as the classic version of this historic style, also referred to as California common. The key difference between the two is in the yeast. California common is a lager while Dampfbier, the German version, is considered an ale. Steam beers are fermented at warmer temperatures than the yeast used might traditionally be. Dampfbier isn’t imported to North America, so unless you’re willing to travel or make your own, you’re not likely to encounter it. Lucky for us, Strap Tank Brewing in Springville, UT endeavored to make a Dampfbier, and it’s all ready for sampling! 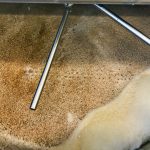 I sat down with Mike Dymowski, the brewmaster at Strap Tank to find out what made him want to brew a beer I’d never heard of. “We have always done a steam beer since opening. I [was] doing research on steam beer and I ran across Dampfbier (German steam beer),” says Dymowski. “I haven’t ever had [it]; I don’t think I’ll be able to buy [Dampfbier] in Utah. So, why not brew one?” Strap Tank’s Dampfbier is brewed with the same yeast as the High Side Hefeweizen, but is 100% barley and is fermented at a warmer temperature. “So, you’re still going to get the banana, clove, vanilla character, but you’re going to get it in different amounts and a different quality than you [otherwise] would because it’s 10 degrees warmer,” says Dymowski. While I sipped the beer, he explained the history behind the style, enhancing my enjoyment of the bubbly beverage.

Let’s go back to the 19th century rural forests of Bavaria in southern Germany, away from the big city of Munich where folks drank their Hefeweizens. Here, wheat was a precious commodity and wasn’t used to brew beer. Instead, barley and “backyard hops” were paired with the Weizen yeast. Dampfbier was the poor man’s beer, fermented at ambient temperatures and brewed with the ingredients available. A similar brewing style also developed in the American West at around the same time. During the gold rush, “steam beer” (California common) was the beer of the immigrant working-class. Brewers had to make beer from what they knew and what was accessible. That was local barley and hops with lager yeast strains that, without access to refrigeration, would need to be fermented at warmer temperatures. The result is beer born of utility and practicality. 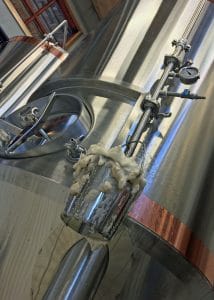 Explanations of the name “steam beer” are varied. Because the beer is fermented at warmer temperatures, the fermentation itself can be quite vigorous. This can result in a lot of bubbles and foam which could give the appearance of steam. Also, the resulting beer would be highly carbonated which, when tapped, would give the illusion of “letting off steam.” Anchor Brewing attributes the name to its former wort-cooling process. They would pump the hot liquid up to shallow open-air vats on the roof to be chilled by cool ocean breeze creating a cloud of steam over the brewery. Whatever the true origins, perhaps it doesn’t matter. Dymowski tells me, “What’s important is the ingenuity of the brewing [and] immigrant communit[ies]; of people finding great value in beer and finding [a] way to brew [it] out of necessity.”

If you’re ready for a date with Dampfbier, a.k.a. “McSteamy,” head on down to Strap Tank for a pint or a crowler. I haven’t seen another example of the German version, but there are other Utah breweries that have made “steam beer” including: Bonneville, Red Rock, and Desert Edge. Here’s a toast to the folks from the past who were “making it work!”

Update: It seems that Bohemian also made a Dampfbier a couple of years ago. I did not get try it, but I really hope they make it again sometime.