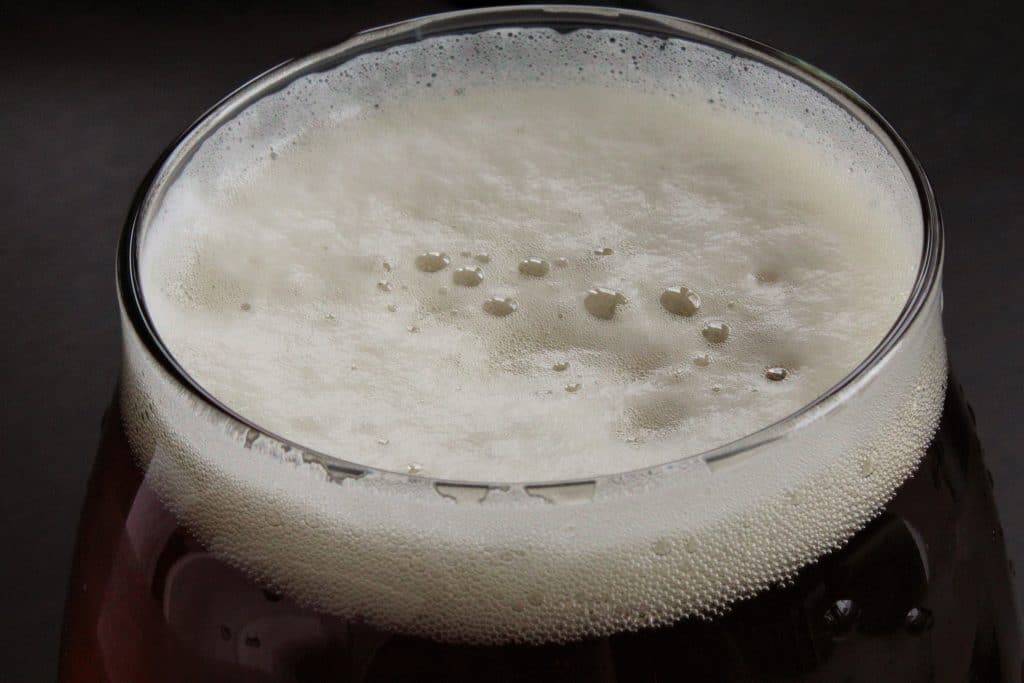 It provides elasticity to bread dough, and a fluffy chewiness when baked. It gives beer a texture of fullness and a pillowy foam. Without gluten, bread is flat and beer is thin. A world without gluten is deflated and found wanting, but it’s a reality for those with celiac disease or gluten intolerance.

Bakers and brewers alike have charged themselves with creating a product that is safe for those normally unable to consume gluten. Some creations are god awful, some are just alright, and one or two are miraculously yummy. But most come off as something quite unlike the gluten-rich model. Are there any tasty gluten-free beers out there?

There’s only one way to find out. 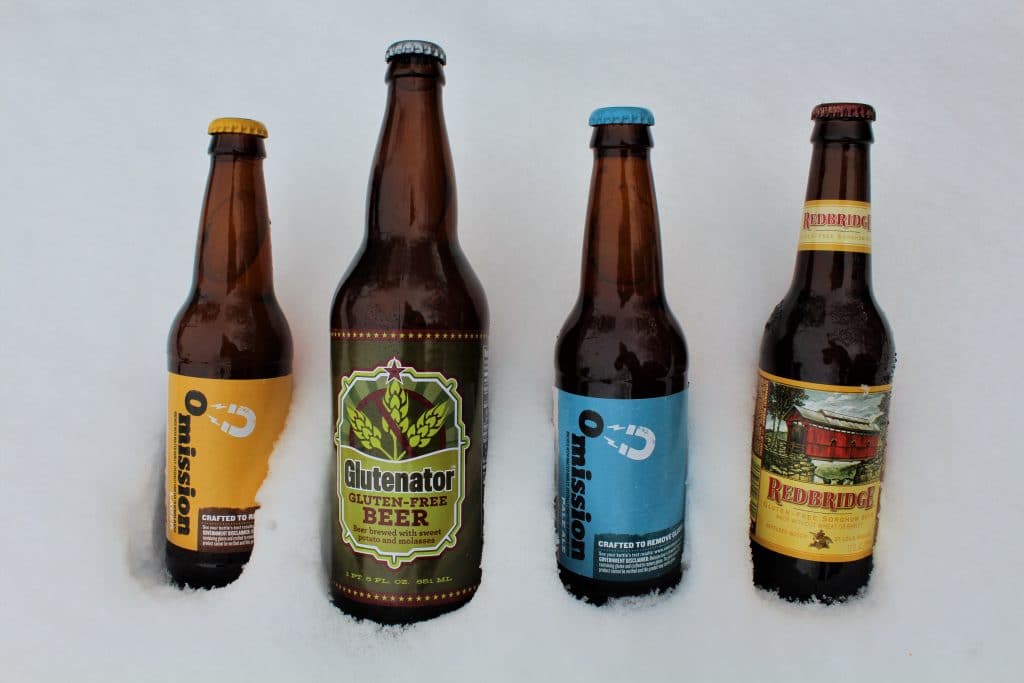 I scoured grocery and liquor stores alike to snatch up any gluten free beer I could find. I was unsurprised to only find a mere four bottles that claimed to be gluten free. One of the largest local breweries, Uinta Brewing Company, has two gluten free offerings, but are currently unable to distribute them in state. Thanks Utah.

After some light reading and research, I’ve discovered there are two main types of gluten free beer… 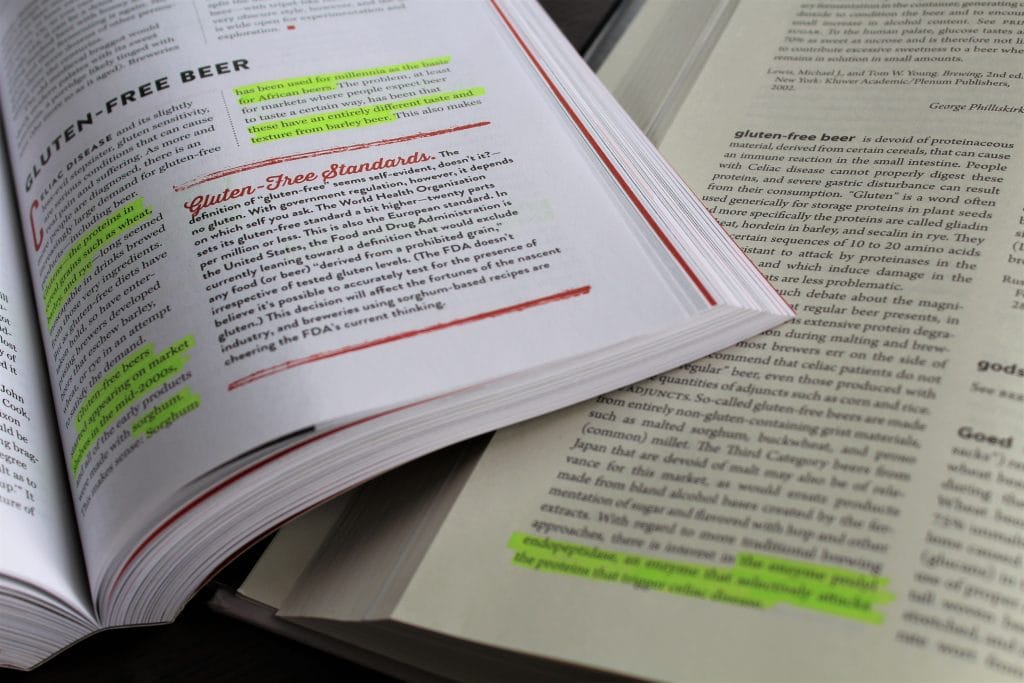 Before we go any further, let’s talk about who should be drinking these and why. These beverages are obviously targeting those that are celiacs, gluten intolerant, or following a gluten free diet. Some people in the last category tend to have a lack of respect for those that truly have intolerance. A dietary choice is not a dietary handicap, and should not be presented as such. It’s this kind of snobbery that has previously steered me away from gluten free products for the simple reason of association.

As a student of beer, I found my aversion to gluten free products has left a gap in my knowledge, leading me to change my attitude and write this post.

These gluten free beers are for everyone. In a state of limited distribution or a world of beer-thirsty masses craving variety, unique flavors, and another beer to mark on untappd, there’s no reason you shouldn’t be giving these legitimate beers a try.

These beers are made without any ingredients that contain gluten. That means no barley, wheat, or rye. Common ingredients for gluten free beers include sorghum, millet, buckwheat, rice, corn, or even legumes. 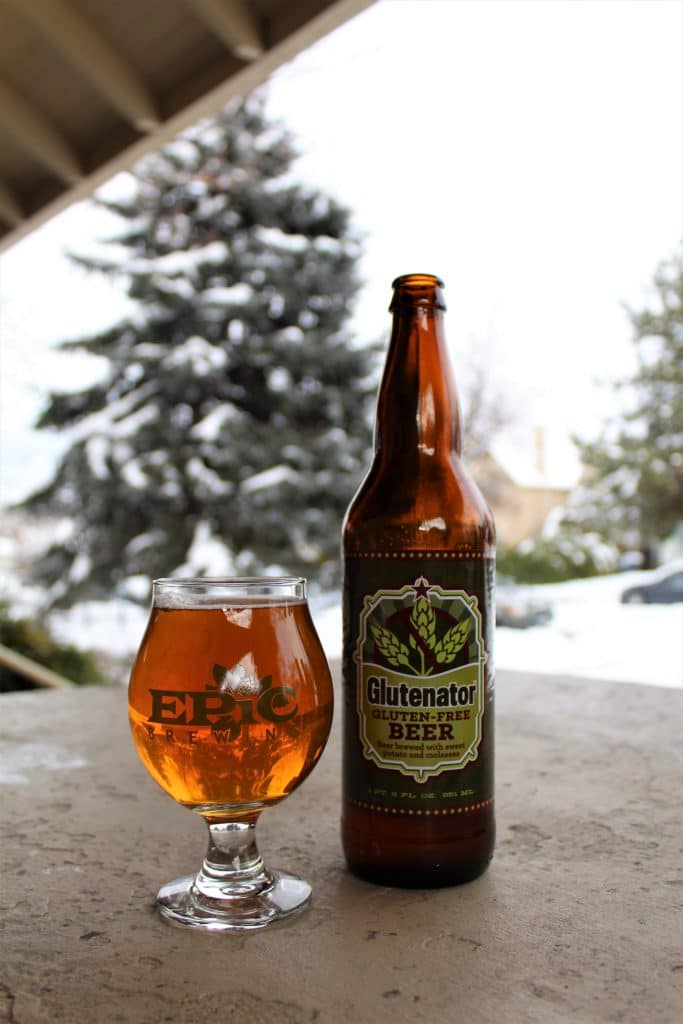 Appearance – Deep gold in color. Little to no foam, even with a vigorous pour. Ever so slightly hazy. Visually attractive.
Aroma – Floral hops, apple skin, sweet potato, mild baking spice, brown sugar
Flavor – Strongly bitter from the initial impact through the aftertaste. Oversteeped earl grey tea. Sweet potato flavor is strong, even in the burps. Cold spiced cider. Moderate cinnamon. The aftertaste is apple chutney.
Mouthfeel – Moderate body and carbonation. It’s what you would expect from a beer with gluten – nicely done.
Overall Impression – I think if I had tasted this blindly, I’d have called it a spiced cider. And if you didn’t know, cider is naturally gluten free. As far as traditional beer flavor is concerned, this brew doesn’t have much. It gains points for hop character and body, but firmly leans toward cider characteristics. If you’re a celiac and must have beer, this one isn’t half bad! But you might just want to stick with cider. Now I want a pork chop… 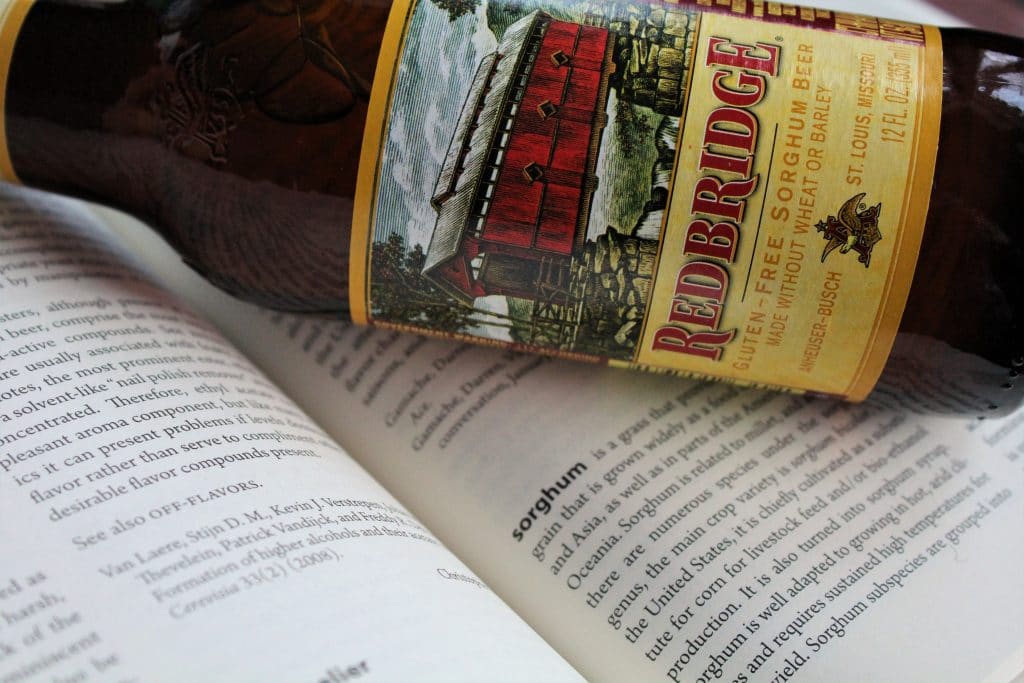 Anheuser-Busch, Inc. – Redbridge
Made With Sorghum

Appearance – Light amber in color with a half inch of foam that quickly dissipates. Excellent clarity. It’s not unlike most other beers.
Aroma – Sour, metallic notes similar to lactobacillus. It smells mass produced and adjuncty. Mild oxidation. I imagine this is what a canned gose would smell like after a year of sitting in a warm room.
Flavor – There is a tangy, wheaty flavor I can’t put my finger on. I guess that must be the sorghum. Mild toasty flavors mingle in the tang with a twinge of copper pennies. The aftertaste is citric and fruity.
Mouthfeel – Moderately light body with moderately high carbonation. Light body is kind of AB’s thing, so no surprises there. My mouth is left feeling a bit acidic after a few sips.
Overall Impression – Did you know this was the first nationally distributed gluten free beer (2006)? The tangy/tart character is something I didn’t expect, but it’s really not that bad. I wouldn’t seek it out, but I wouldn’t turn my nose up at it, especially if I was a celiac. Sorghum has a tendency to produce mildly sour flavors which doesn’t jive with a lot of beer styles. However, there’s an opportunity here to make a gose or Berliner weisse sans gluten cereal grains. Redbridge, though quite watery and mild in flavor, is beer-like at its core.

This kind of beer is made with normal brewing ingredients and uses an enzyme that breaks down gluten molecules, drastically reducing the level of gluten in beer. It commonly brings the gluten content below 20 ppm, which is the industry threshold a beer must be below in order to be called “gluten free”. White Labs sells this enzyme under the name Clarity-Ferm, which is made from Brewers Clarex® by DSM. The enzyme is pitched with the yeast, and does its magic during fermentation. Though this enzyme reduces gluten levels, precautions must still be taken to prevent cross contamination in breweries where gluten ingredients are used. 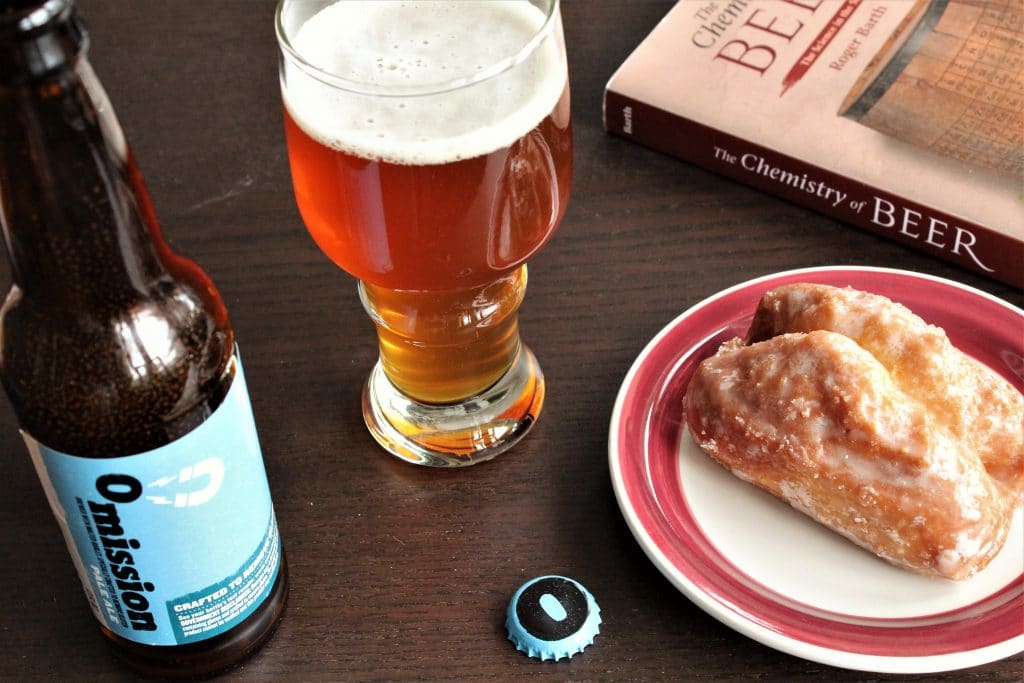 Appearance – Amber in color with a healthy cap of foam that lingers for a moment. The clarity is slightly hazy – there was some sediment in the bottom of the bottle. The beer looks inviting.
Aroma – Dank American hops, caramel malt, bread crust, slightly nutty.
Flavor – Hop bitterness overwhelms the balance. Toasted banana bread with walnuts. Strong burnt sugar. Hop flavor is earthy and resinous on a moderately high level.
Mouthfeel – Although astringent from the bittering hop, it’s absolutely what I would expect from a normal beer. Carbonation is moderately high and body is moderately full.
Overall Impression – This pale ale comes off as largely unbalanced, but as a beer nonetheless. It may be due to age, but it seems there is some unchecked bitterness throughout the tasting experience. I’m also not a huge fan of caramel malt, which seems to be a big part of this beer. That being said, I sure as hell would drink this over the truly gluten free beers. I would never think of this beer as gluten free in a blind tasting. Well crafted! 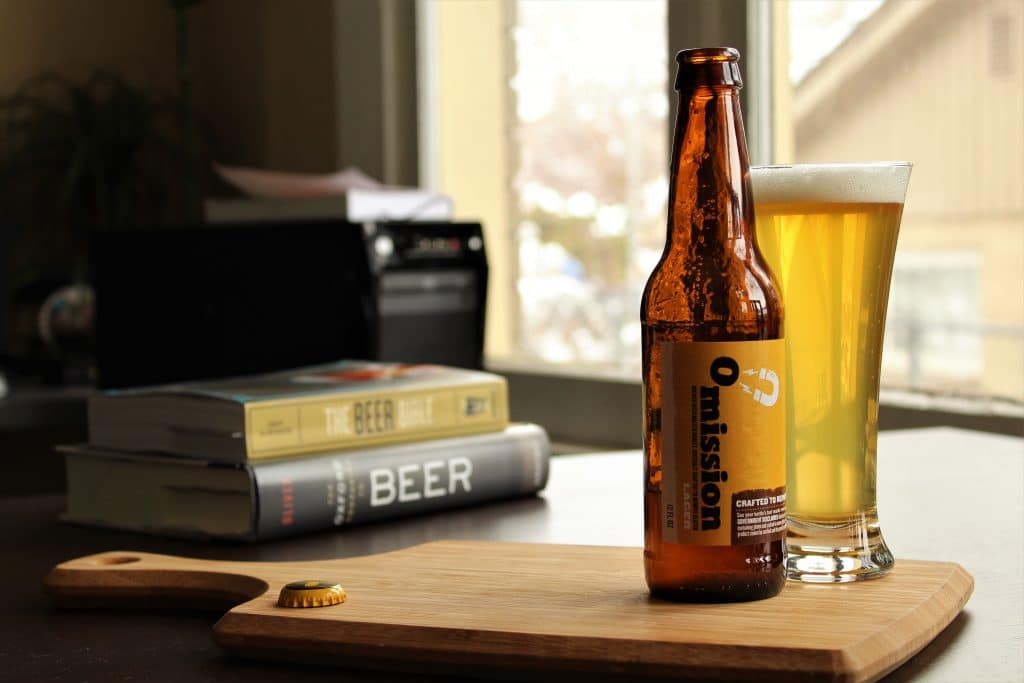 Appearance – Straw in color with a short stack of foam on top that disappears quickly. It’s fairly hazy for a light colored lager, but it’s not stark. I can see some sediment on the bottom of this one, too.
Aroma – Crisp and grainy. Mild fruitiness – green apple. Saltines. The aroma is timid overall.
Flavor – Toasted sourdough english muffins! Hop bitterness is moderate and rests in balance with the pale malt flavors. There’s a certain tang in here I relate to swiss or provolone cheese. It’s not overwhelming or off-putting, it’s just different. The hop flavor is floral and pleasant.
Mouthfeel – Moderately low carbonation. Fairly thin in body. An acidic character lingers for a long, long time.
Overall Impression – This beer acts just like any other beer. You would never know there’s a cog or two missing from the machine. There isn’t as much carbonation in here as I would expect, but it doesn’t change my impression much. If I had to give it a specific style, I’d go with Munich Helles. I favor this beer over the other gluten free beers I’ve tried, so she’s a winner!

The world of gluten free beer isn’t quite as awful and insipid as I thought. It might not be exactly like the gluten-rich world I live in, but I wouldn’t cry too hard if an illness or intolerance placed me there. Bravo, gluten free beer brewers! 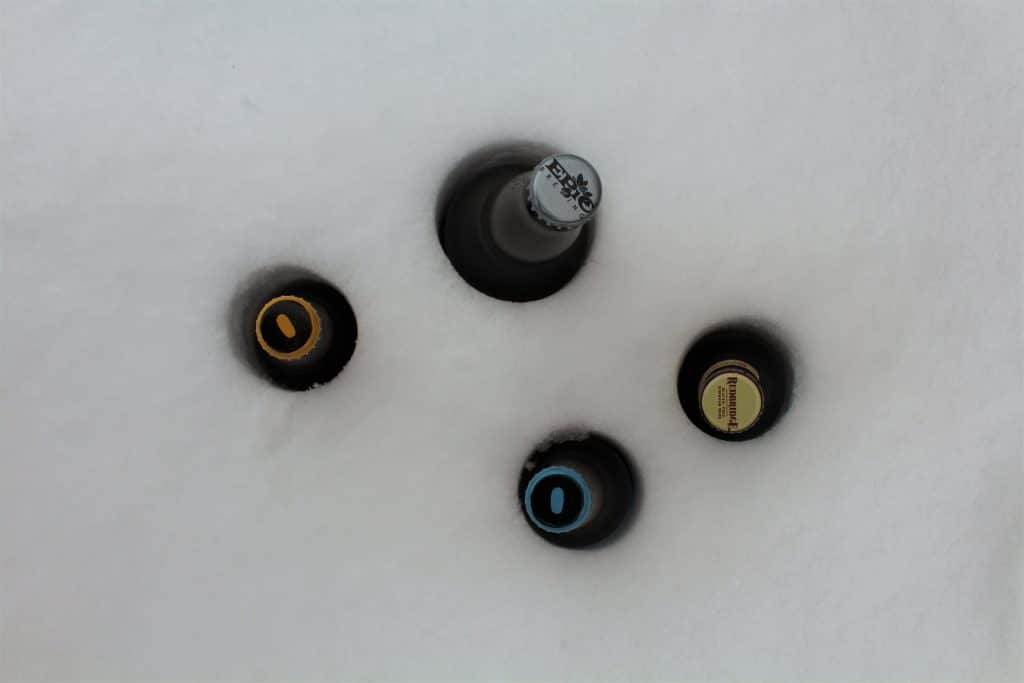