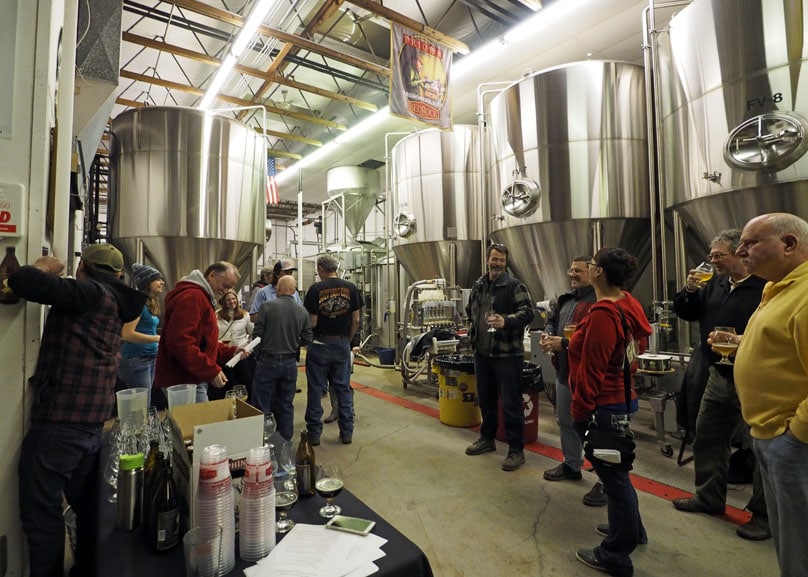 For a beer lover, the brewery is sacred ground. It’s a temple to the gods who created the most wonderful beverage known to man! If you partake, surely you should make a pilgrimage to the source of the good stuff! Why not do it while learning about the brewing process? Let’s go on a Beer School Brewery Tour of Red Rock Brewing Co.! 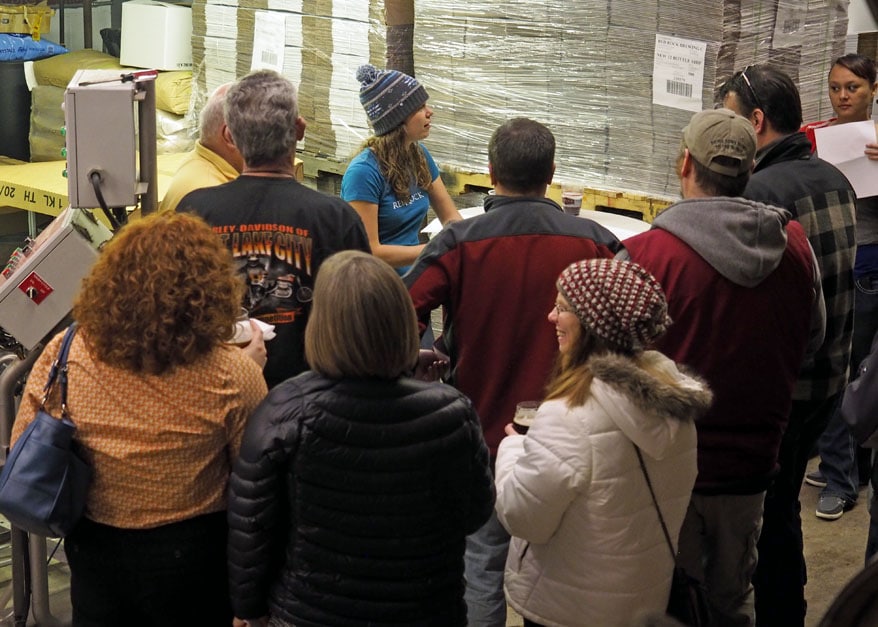 Last week on Crafty Beer Girls, Lauren shared her beer and food pairings for Red Rock Brewing. They were an installment of the Beer School she’s been teaching for the brewery. Lauren works on the Red Rock brewing staff and is a Certified Cicerone®. I’ve had the opportunity to attend some of her classes, and they are pretty awesome! The final class was all about the brewing process and the ingredients used. It was held at the Red Rock production brewery where we took a field trip to see where the magic takes place. A little beer drinking to lubricate our brains didn’t hurt!

It started with the basics: water and malt. Water is extremely important to the brewing process. The constitution of the water provides nutrients for the yeast, and it can either enrich or diminish the malt and/or the hop characteristics. Red Rock uses a reverse osmosis filter for some of their beers and city water for others. The chlorine is allowed to evaporate, and it may be treated to adjust pH. Lucky for us, our tap water in Salt Lake is quite good! 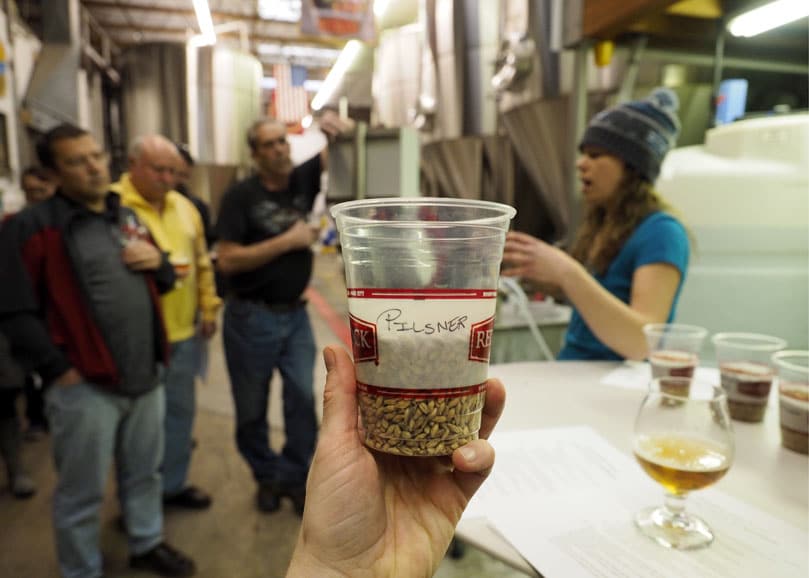 Malt is where the sugars, proteins, and enzymes are derived from. They contribute to flavor, color, and the mouthfeel of the beer. How the grain is kilned, stewed, roasted or smoked can result in flavors and aromas like: bread, biscuit, caramel, toast, chocolate, coffee, and smoke. A beer’s mash/grain bill consists of the sum of the grains used to create it and will include a base malt and often of specialty malt for a complex malt character.

Part of the class included tasting each of these malts. If you’ve never chewed on a piece of malted barley, it’s an illuminating experience! Some were sweeter and crunchier than others. If the malt has been smoked, you can taste it. It gives you an idea where these flavors in your beer come from. If you want dive a little deeper into malts, check out Lauren’s article, The Mechanics of Malt. 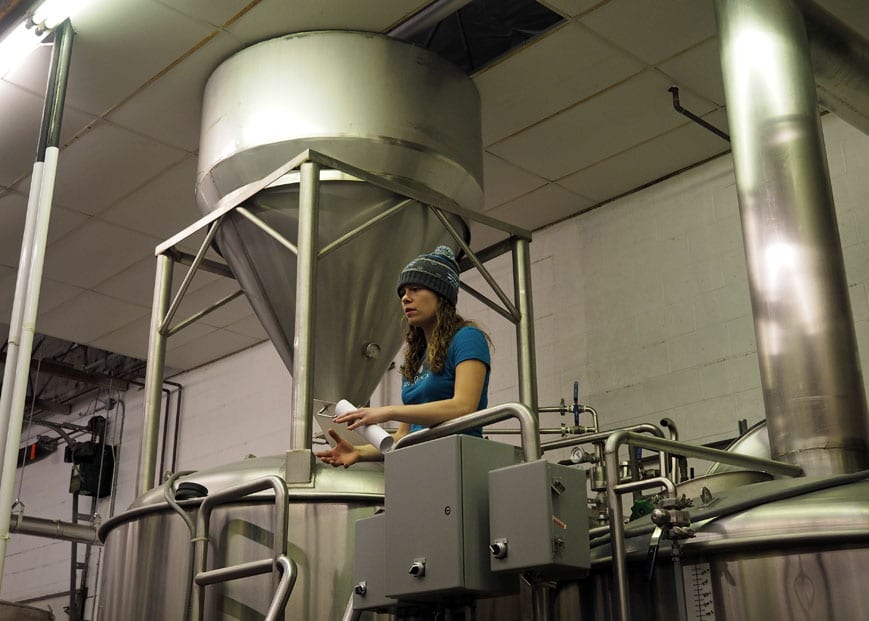 Next stop: the mash tun, where the milled malt (grist) is mixed with hot water creating a gruel-like substance known as the mash. The mash is where enzymes are activated, and the starches are transformed into fermentable sugars. Once complete, the liquid wort is separated from the husks and solid matter, a process called lautering. The wort goes into the boil kettle along with a determined amount of additional water to achieve the desired gravity and resulting ABV. Once the wort begins to boil, it’s time to add the hops! 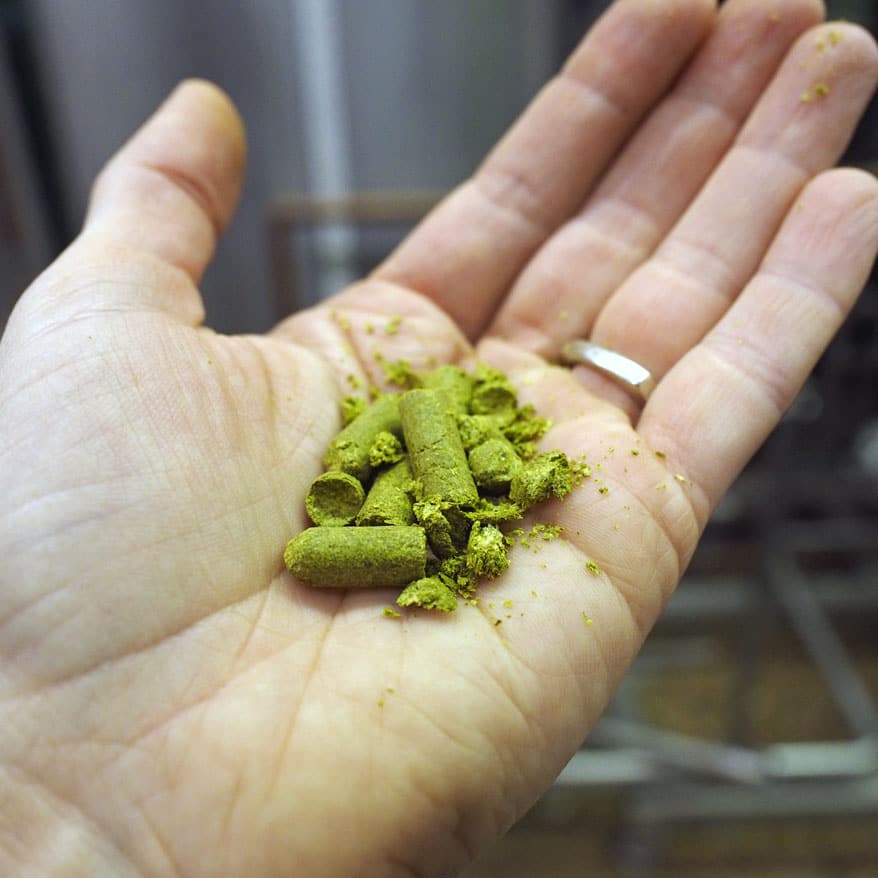 Bittering hops are added at the beginning, while the flavoring hops come in with about 15-30 minutes remaining in the boil. Any aroma hops are included at the tail end (<15 minutes) of the boil. The character of the hops depends on the type and where they are grown. The unique characteristics result in flavors and aromas that are piney, citrusy, grassy, fruity, woodsy, spicy, herbal, and earthy. Hops also have antimicrobial properties that prevent the beer from spoiling. This was probably my favorite part of the tour. We were able to take the hop pellets and break them up in our hands, smell them, and really get an idea of the differences.

On to the fermentor, where I’m told, the magic happens! The yeast is mixed in with the wort, and there it starts to chow down on the sugars. First it’ll eat the simple sugars, then work its way to the more complex ones, turning them into alcohol and CO₂. The amount of sugars the yeast converts will dictate whether the beer is dry or sweet. After it finishes the majority of fermentable sugars, the yeast begins reabsorbing byproducts (like diacetyl and acetaldehyde) produced through fermentation, reducing some potential off flavors. Depending on the yeast strain and fermentation conditions, aroma and flavor results can be: spicy phenols (clove, baking spices, smoke), fruity esters (banana, apple, pear), or fusel alcohols (spicy, hot, solvent-like). Some beers are dry hopped toward the end of fermentation. 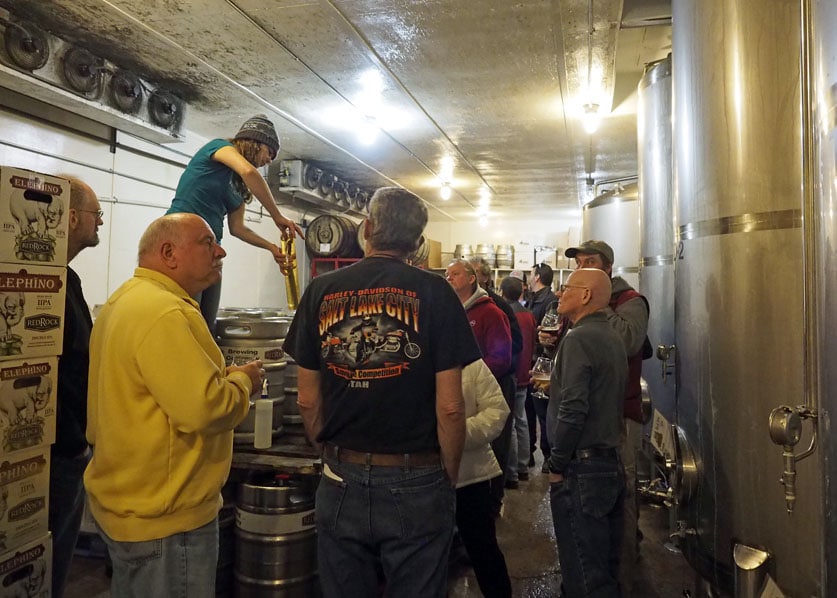 Once the fermentation is complete, the beer moves on to the brite tank in the cold room for conditioning. Colder temperatures allow particles in the beer to clump together and fall to the bottom increasing the clarity of the beer. It may also be filtered which will enhance clarity and reduce conditioning time. In the brite tank, the beer will either be carbonated, nitrogenated, or lagered. After several days, the beer is bottled or kegged, which leads to my very favorite part. Drinking it! 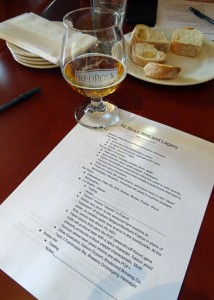 The Beer School Brewery Tour was educational and full of tipsy fun. If only all school was like that! Classes are held every second Monday of the month at various Red Rock locations. The next one will be “All About Ales and Lagers” this coming April 11th 2016. If you want to become a pupil, keep an eye on the Red Rock Facebook page for a sign-up link. You might become a beer brainiac, and won’t that impress (or alienate) all your friends?! Cool!